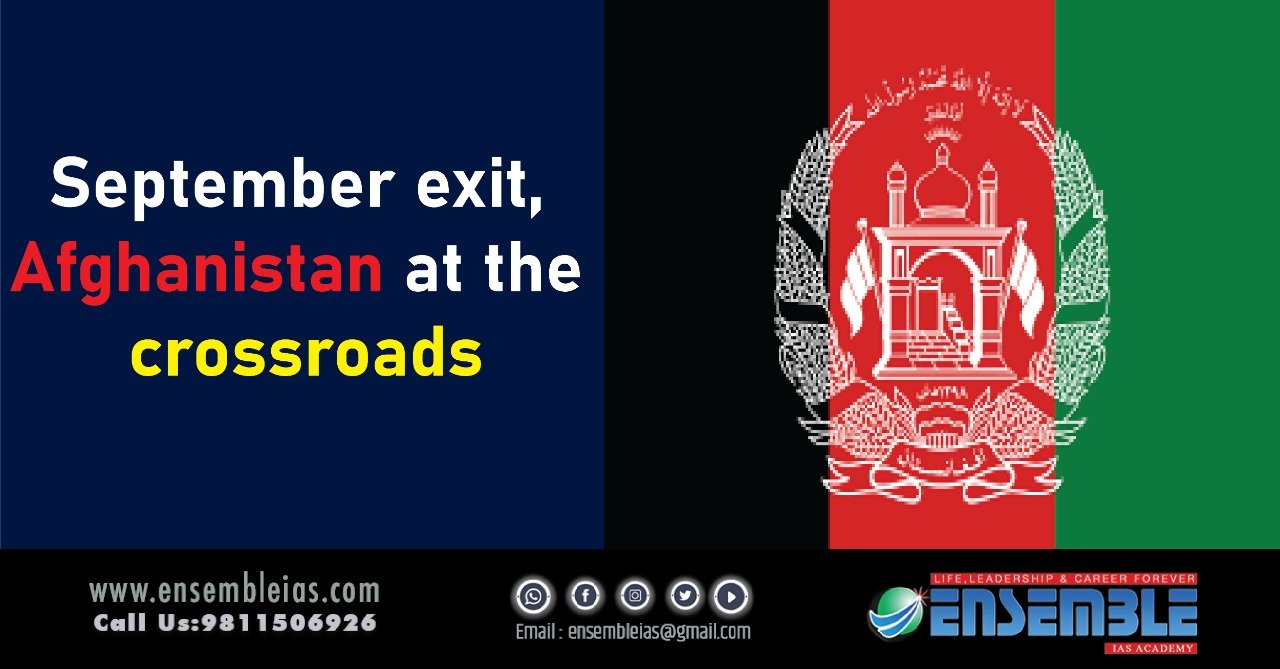 A September exit, Afghanistan at the crossroads: While the U.S.’s withdrawal will end its ‘forever war’, peace depends on what future steps the country’s stakeholders take

In conflict resolution diplomacy involving multiple stakeholders, sometimes the venue becomes as important as the agenda of peace talks. The fragile Afghanistan peace process has been in disarray as the Washington-desired conference to be hosted by the United Nations in Istanbul, Turkey — earlier scheduled for late April-early May — remains suspended due to the reluctance of Afghan’s Taliban. Turkey had to announce the postponement of talks until the end of Ramzan. Now there is some hope of breaking the impasse as the Taliban have expressed an openness to attend the Istanbul summit with the rider that the final outcome will be achieved in Doha. Although it gives an impression of the Taliban snubbing Turkey, the real issue regarding Afghan peace, however, should be: ‘what’ is to be done, and not ‘who’ does it or ‘how’ it is done.

The Istanbul conference is being calibrated by the Biden administration with its plans to completely withdraw from war-torn Afghanistan. Rejecting the Pentagon’s preference for a conditions-based exit, United States President Joe Biden is insistent on withdrawing the troops on September 11, even without any power-sharing deal between the warring parties.

With the rising level of violence, prospects of negotiating peace in Afghanistan seem bleak. Since the announcement of an exit date, Afghanistan continues to witness deadly attacks across its provinces. For instance, multiple blasts outside a girls school in Kabul recently was the worst terror attack in Afghanistan in a year. However, while adopting a tough posture, the Taliban have nonetheless kept the space open for engagement with the Afghan government. After a long pause in peace talks, they met in Qatar on May 14, the second day of a three-day ceasefire.

Consensus still eludes the Taliban’s real motives. According to conventional wisdom, by indulging in arbitrary acts of violence the Taliban are demonstrating that they are capable of seizing by military force what is not offered to them on the negotiating table. It would, however, be more prudent to believe that there exists a gulf in the views of the field commanders, who would like to wait it out for the U.S. to depart as there is little value in making concessions during the talks, and the Taliban leadership, who may feel the urgency to resuming negotiations than completely abandoning them for fear of losing the international legitimacy they enjoy at the moment.

Being the Taliban’s chief patron, Pakistan is the most important player in the Afghan conflict. After months of negotiations, the U.S.-Taliban deal was signed in February 2020, and Pakistan took full credit for it. Unlike his predecessor, Mr. Biden has not set timelines, upping the ante for many stakeholders. As the U.S. military presence in Afghanistan for almost two decades had kept Washington reliant on Rawalpindi for operational and other support, Pakistan not only treated the U.S. as its geopolitical pawn but also smartly mobilised this factor against India. With the disappearance of this lethal dependence, Pakistan faces an uphill task in conducting a viable Afghan policy. Therefore, Pakistani Foreign Minister Shah Mahmood Qureshi’s latest phone call to the U.S. Secretary of State Antony J. Blinken should be seen in this context. Expressing Pakistan’s desire for “close economic cooperation, enhanced regional connectivity and common vision for a peaceful South Asia”, the crux of Mr. Qureshi’s discussion was in laying stress on the need for “responsible withdrawal” of foreign forces, clearly indicating fear of a pyrrhic victory.

No one knows better than Pakistan’s Army chief General Qamar Javed Bajwa that Pakistan cannot keep America invested in his country on military, economic, and societal fronts without partnering with the U.S. to ensure a smooth transition of power in Kabul. But western-backed and Taliban-opposed Kabul government’s relations with Pakistan continue to be characterised by deep hostility and mistrust. Despite a recent goodwill trip to Kabul by Gen. Bajwa, accompanied by the chief of the Inter-Services Intelligence (ISI), Lt.-Gen. Faiz Hameed, to assure the Afghan leadership of Pakistan’s support for an “inclusive power-sharing arrangement”, Afghanistan President Ashraf Ghani has accused Pakistan of running “an organized system of support” for the Afghan Taliban.

Dealing with the President

An essential element of Mr. Biden’s plan is to make Mr. Ghani agree to dissolve his government and set up a new governing system that would include the Taliban, which could finally decide the future distribution of power and changes to the Afghan Constitution. But Mr. Ghani refuses to step down for an interim regime to take over, insisting that a new government should emerge through elections in which he promises not to run. Mr. Ghani is seen as a figure who has deepened divisions among an already fractured Afghan political elite, besides failing miserably to wean the Pashtuns away from the Taliban. Ever since his controversial re-election, rival contenders for power are increasingly attacking his legitimacy, challenging his motivations and grounds of support. On the contrary, the Taliban continues to display a large measure of cohesion, despite reports of its fragmentation. Without an immediate ceasefire, a tough summer awaits the Afghan security forces.

Mr. Ghani could have had his way had Pakistan been the Taliban’s only patron. The Taliban now draw support from a wide variety of regional powers, including Russia, China and Iran. However, these countries too want the insurgent group to moderate its position. China, which has earned notoriety of being the free rider in Afghanistan, seems confused as the American exit looms large. Despite public rhetoric of asking the U.S. to leave, the Chinese policy makers have become more comfortable over the years with America’s military presence in Afghanistan which has suppressed many terrorist groups which threaten China directly or Beijing-friendly regimes in Central Asia.

Since the need to focus on great-power competition appears to have been factored considerably into Mr. Biden’s decision of strategic retrenchment from Afghanistan, it has serious implications for China; it would leave Beijing vulnerable to its spillover effects particularly in the restive Xinjiang province. That is why China has remained invested in all major regional Afghan-centric negotiations. Though it has a stake in the success of the Istanbul talks, its latest offer of hosting intra-Afghan talks in Beijing will only confound the current contradictions. Nevertheless if all regional frameworks fail to achieve Afghan peace, Beijing will not hesitate in asking for a potential UN intervention, as revealed by Chinese Foreign Minister Wang Yi.

India has been the key regional backer of the Ghani government, supporting an “Afghan-led, Afghan-owned and Afghan-controlled” peace process. New Delhi rightly fears a Taliban-dominated regime in Kabul might allow Pakistan to dictate Afghanistan’s India policy. That is why India’s External Affairs Minister S. Jaishankar, has underlined the need for “a genuine double peace” (within and around Afghanistan). But despite being offered a seat at Istanbul at the U.S.’s behest, New Delhi remains a peripheral player. As opportunism and strategic boldness seem to have become the main structuring poles of Afghan conflict resolution diplomacy, India’s policy preference for courting Kabul’s traditional political elite has faced a distinctive drawback; it has no leverage with the Taliban. Hence, there is nothing unethical in exploring the possibility of developing links with the amenable section of the Afghan Taliban.

The strategic competition between Washington and Beijing, China’s growing rivalry with India, and New Delhi’s tense relationship with Islamabad are some of the factors which will certainly affect the situation in Afghanistan as the U.S. leaves the country. Thus, any reduction in tensions between India and Pakistan, irrespective of who plays the mediator, will have an indirect stabilising effect on Afghanistan. Moreover, Pakistan has a direct stake in the success of peace talks because it is aware of the negative fallout of another cycle of violence in Afghanistan — unconstrained refugee flows and terror attacks inside its territory. It remains to be seen how border fencing along the controversial Durand Line can minimise this negative fallout.

While the September 11 exit would bring the U.S.’s “forever war” to an end, it is unlikely to result in peace if Afghan stakeholders show their utter inability to take the process forward. But If the path of negotiations is either abandoned or accepted half-heartedly, it will be impossible to stop Afghanistan’s descent into chaos and civil war.