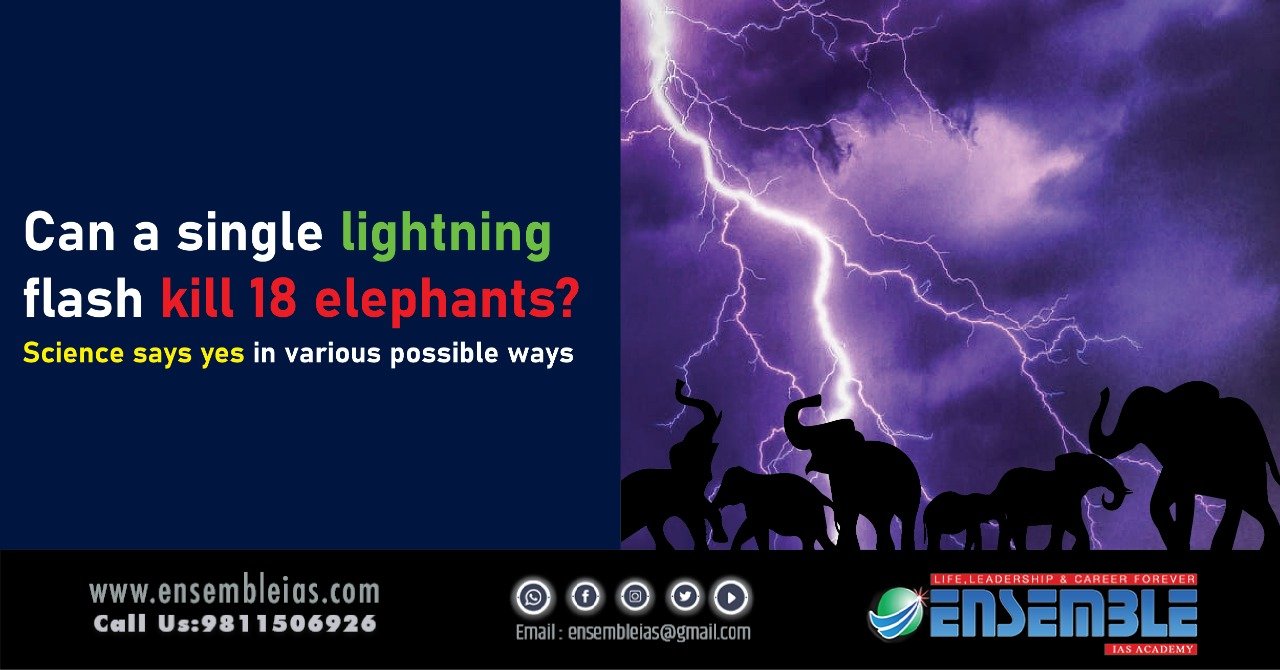 Can a single lightning flash kill 18 elephants? Science says yes, in various possible ways: On Wednesday night, 18 elephants died on a hilltop in Assam. The preliminary post-mortem report indicates they had been struck by lightning. While the state government is waiting for the final report before definitely ruling out other possible causes, the preliminary conclusion raises a question: Can a single flash of lightning kill 18 elephants? The answer is yes, based on science and a history of such events.

How does lightning kill animals?

Lightning may injure or kill animals in a number of ways, physicist and engineer Chandima Gomes wrote in the International Journal of Biometeorology in 2012. In an email to The Indian Express, Gomes, now professor of high voltage engineering in the University of Witwatersrand, Johannesburg, listed some of these ways, including:

DIRECT FLASH: An animal in an open field may be struck directly by lightning if part of its body protrudes over other objects in the vicinity. Taller animals are more vulnerable.

SIDE FLASH: When lightning strikes a tall object such as a tree, it may generate a side flash that can strike an animal standing underneath the tree.

TOUCH POTENTIAL: If one part of a tall animal’s body is in contact with the ground while another part, at a higher elevation, comes in contact with a lightning-struck object, a partial current may pass through its body.

STEP POTENTIAL: The most common lightning hazard among four-legged animals. When an animal’s front and hind feet are far enough apart, a partial current may pass through the body in certain circumstances.

Which of these could have happened in Assam, assuming it was indeed lightning that killed the elephants?

According to a member of the team that conducted the post-mortem, it is possible that the elephants were killed by current flowing through the ground (The Indian Express, May 15). That would be ‘step potential’.

When current flows through the ground following a lightning strike, the electric potential (voltage) is highest at the point of the strike, and decreases with distance along the direction of the flow. If an elephant is facing the strike point, the current will flow from the front feet (higher potential) to the hind feet (lower potential), electrocuting it in the process.

But so many elephants killed in one flash of lightning?

It can happen because in a single lightning flash, the current flows to the ground several times. “These are termed subsequent strokes. This is why we see a flash of lightning flickering. There is a possibility of each subsequent stroke attaching to different nearby objects due to a few reasons explainable in physics,” Gomes told The Indian Express.

“There are two other possibilities of multiple deaths other than step potential,” he said. One of these is side flashes from the first elephant being struck to the others. “That’s why in lightning safety, we advise people to stay at least 2 m away from one another under thunderstorm conditions — long before Covid-19 restrictions were set forth,” Gomes said. The other possibility is multiple side flashes from a nearby tree.

Since an elephant’s front and hind feet are wide apart, it would appear to make it more vulnerable than a smaller animal, such as a rat.

The author of another paper, on the other hand, felt elephants are indeed more vulnerable —because of their height. Following the death of two giraffes in a lightning strike in South Africa last year, Ciska P J Scheijen, now a conservation scientist with the Rockwood Conservation Fund in Kimberley, wrote a paper in the African Journal of Ecology suggesting that it was height that had made the giraffes vulnerable to a direct strike. And elephants too are tall animals.

“Yes, I do believe elephants would potentially have a higher chance of getting struck by lightning compared to other species because of their height,” she told The Indian Express, by email.

But could the elephants have been struck by a direct flash?

“Chances of getting directly struck by lightning highly depends on the vicinity. Tallest objects in the vicinity attract the lightning. So if there are tall trees (higher than the elephants) the chance that lightning strikes them directly is not big. But if they are in an open grassfield the chances are bigger,” Scheijen said.

The Bamuni Hill in Assam, where the elephants died, has no tall trees that could have taken the brunt of the lightning strike. A number of smaller trees were found burnt and split down in the middle, indicating that the area had indeed been struck by lightning. Some of the elephants, too, had burnt ears, charred bellies, and burn marks on the scapular region.