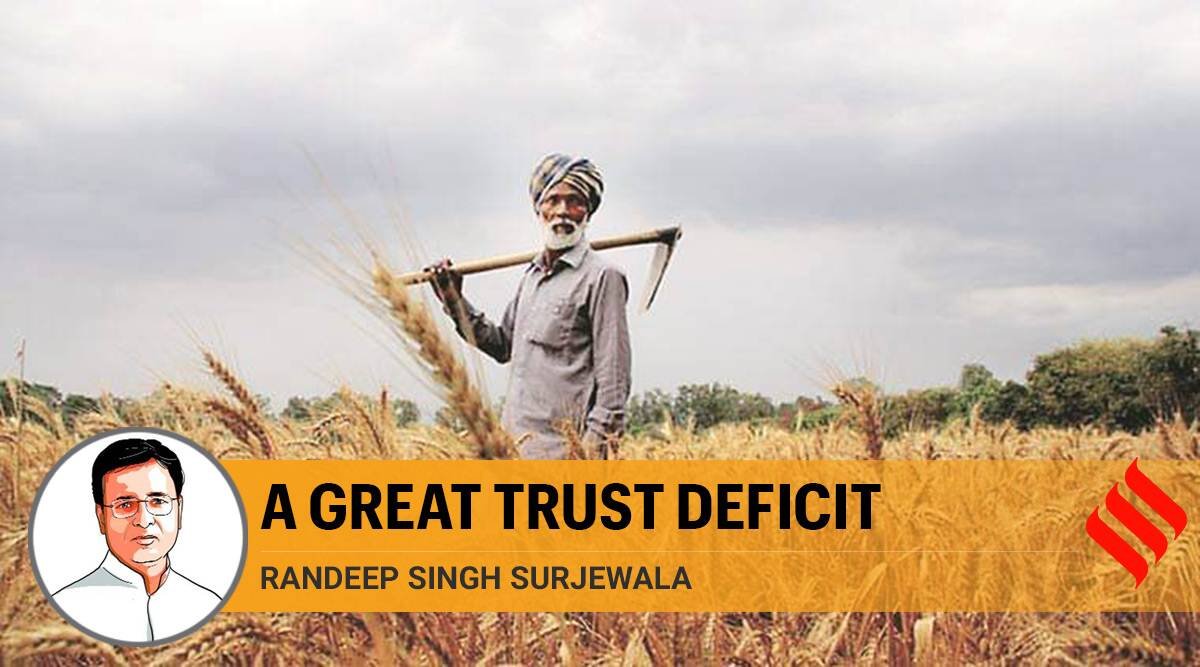 In the seven years of mediocre governance marked by institutional capture, propaganda politics, unprecedented economic mismanagement and unaccountability, the Narendra Modi government is faced with perhaps its greatest challenge yet: India’s farmers have rallied together once again, asking for the most basic of guarantees and the repeal of the three agrarian laws that they neither asked for nor support.

These three laws, brought in by ordinances in the middle of the pandemic and passed without any prior consultation, debate or discussion, are catastrophic in their implications. Specifically, they foreshadow the complete erosion of the guarantee of Minimum Support Price (“MSP” for agricultural produce) and the thoughtless dismantling of Agriculture Produce Marketing Committees while leaving small farmers vulnerable to larger private players and lobbies motivated purely by self-interest. A direct consequence would be a dismantling of the public distribution system (PDS) or the guarantee to provide foodgrains through ration shops to the country’s disadvantaged. There are several other problems as well, such as those of bypassing judicial remedies of going to court for redressal. They also grossly encroach upon the exclusive legislative competence of state governments to legislate on agriculture.

However, at the core of the current impasse between farmers and the Modi government lies a massive trust deficit cultivated over seven years of broken promises, manipulated data and outright neglect.

Barely a month into its first tenure, the Modi government directed that the payment of bonus on MSP to farmers in key agrarian states be cancelled. This was followed by the repeal of the Right to Fair Compensation Act brought in by the UPA in 2013 to ensure market price for acquired land. In a surprise to no one but the Modi government, this move was met with nationwide protests, which led to the PM announcing in his radio broadcast that the amendments would be repealed. The fact that these amendments were snuck in through state laws in BJP-ruled states deepened this lack of trust.

Then came the denial of fixing the MSP at cost plus 50 per cent. While this was a key election promise in 2014 and was present in the BJP’s election manifesto, the Modi government in an affidavit before the Supreme Court denied this, saying fixing MSP at cost plus 50 per cent would distort the market. The farmer obviously felt cheated. In the 10 years between 2004 and 2014, MSP for key agricultural produce had increased by a minimum of 121 per cent (in the case of chickpeas) to as high as 219 per cent (in the case of moong dal). And this was in addition to a massive farm loan waiver of almost Rs 72,000 crore and income support from the MGNREGA. Compare this to the last six years, where the highest increase has barely been sufficient to cover increased production costs.

Another much-advertised programme — the Crop Insurance Scheme of 2016 — saw insurance companies making a profit of Rs 19,202 crore (as of last year) after paying compensation to the farmers, as governments and farmers ended up paying high premiums.

Blanketed by these challenges, it is no surprise that the country saw a sharp increase in farmer suicides. What was even more surprising is that these prompted almost no outreach from the Union Cabinet, much less the prime minister.

The yawning trust gap is, thus, writ large. After all, if one cannot take the PM’s word at face value, then what else matters? This is the same Hon’ble PM who now assures the farmers that the new laws will not impact the MSP guarantee.

In response to the current protests, the Modi government reverted to its tried-and-tested tactic — sowing seeds of division and questioning the credibility of the suffering farmers. With a pliable section of the media at its command, the BJP machinery carried out a relentless and systematic campaign of defamation and propaganda. However, they learnt, much to their consternation, that labelling genuine protestors as Naxals and Khalistanis, Chinese and Pakistan agents cut no ice. It had the exact opposite impact than intended. Public sentiment rallied in favour of our “annadatas”.

On January 12, the Supreme Court intervened to stay the implementation of these laws but also established a committee composed solely of individuals who have declared their support for the bills and opposed the farmers, calling their protest misguided and going to the extent of blaming Opposition parties. The question is: Can anything meaningful fructify from discussions with a committee, whose members already support the government stance on three agrarian laws and oppose the farmers? This is unlikely to address the growing chasm of distrust that the Modi government continues to foment with its campaign of division and smokescreens.

The BJP is not a fan of India’s history. This is in large part because of its own unflattering role of concessions and absences from the crucial moments in our journey towards Independence. This might be one instance where the party would do well to revisit the chronicles of farmers’ movements. They would learn that farmers have never backed down. And, ultimately, they have always prevailed.