Having developed a strategic identity, China is aggressively seeking to venture into the global arena. With Chinese being an official language of the United Nations and China having secured a permanent membership at the UN, it is indicative of the fact that it is China’s officialized move to further the agenda of dominance as a world power at all costs with all forms of war.

There are typically two ways of seeing China: first, as another in a long succession of great powers rising to a place of dominance in the global hierarchy and second, as an entirely new phenomenon in the light of its history associated with its imperial past, communist rejection of world capitalism, and cultural particularity.

Geopolitically, the rise of China altered the dynamics of the post-War international order hinged on the ideological difference between communism and liberalism, and drove many countries, especially Asian countries, to take special cognizance of the changed regional reality.

To achieve the reality for themselves, the Chinese are always at loggerheads with all their perceived and non-perceived targets of dominance which they want to make subservient.

The Chinese, as the world has discovered, do not only fight a war on the borders. If any country is feeling stressed, the Chinese have a hand in it, and that too without the knowledge of that country.

When the Chinese are at war, they make sure that they are everywhere to wear the country out and bring it to their own terms.

It does not necessarily involve lying to you, but it changes the way you perceive information. For instance, if you talk about a virus coming from China and call it a Chinese virus; they say it is racist to talk about the origin of the virus.

Chinese Communist Party has a saying when it comes to psychological warfare: “strangle them with their own system”. In this tactic, the Chinese observe how different countries operate, find out what is controversial within their system and how their system functions.

They then contemplate how to use those systems to twist things around, to cause chaos, and to mess things up. For instance, if you claim to believe in free speech, the Chinese will elicit protests in your country calling you out.

Media warfare is the “manipulation and control of all outlets of information that has the potential to influence, not just news media but social media or any media where one can speak freely and engage a large section of people.”

For instance, to counter the theory of Chinese origin of Coronavirus, China first publicly attributed the source of virus to US military. Soon after this, all outlets of information, including pawns like 50 cent Army which go on the comments section of websites like YouTube, Facebook, Twitter and other Chinese social media websites, keep repeating their narrative till it starts to appear true.

Legal warfare is the manipulation of the international legal system. China, being the permanent member of UNSC, and a heavyweight in major international forums like the WHO, it is not very difficult for China to do this. Using the same warfare technique, China has been able to avert an international inquiry into the origins of the Coronavirus.

China refuses to disengage from two friction points in Hot Springs and Gogra.

China, in its apparent ambition to become the world’s predominant power, is bullying neighbouring India into submission in areas where the two countries disagree. China’s border actions against India have often been called a “salami slicing tactic”.

China seems to be seeking to dominate territory through incremental operations, too small to attract international attention or begin any actual war with India, but sufficient to accumulate real results over time in the form of gained territory.

It is similar to the tactic China has been using in the South China Sea. According to the 2021 Annual Threat Assessment of the US Intelligence Community, the China’s occupation since May 2020 of contested border areas of India is the most serious escalation in decades and has led to the first lethal border clash between the two countries since 1975.

Despite 11 rounds of talks so far, the latest one on 09 April, de-escalation remains elusive. China refuses to disengage from two friction points in Hot Springs and Gogra. 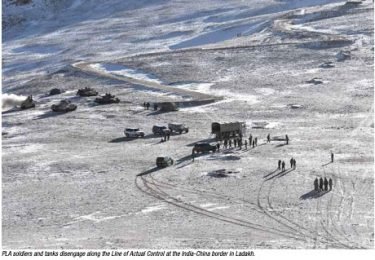 And that is not all. The belligerent actions of China are not just at the borders. There is not just military warfare, there is economic warfare too.

China’s Belt and Road Initiative (BRI) is a way for China to expand its global influence by making countries economically dependent on it, often through “debt-trap diplomacy”.

China extends conditional loans to countries which they are unable to repay and are forced to give up national assets, such as land or ports.The BRI also serves as a way to “encircle” India, bringing more countries of the region into China’s orbit.

Almost all of India’s neighbours are part of China’s Belt and Road Initiative – some more, some less: Sri Lanka, Pakistan, Bangladesh,

A part of the Chinese strategy is to use Pakistan to keep India from emerging as a rival. 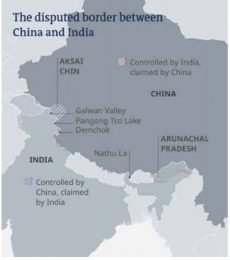 Afghanistan, Nepal, and Myanmar. India has refused to endorse the Belt and Road Initiative. Crucially, based on the available evidence consisting of port infrastructure projects, various statements from the government and China-based scholars / analysts, as well as new naval hardware, it appears that China does intend to develop some sort of Indian Ocean force, and India, since independence, has not faced any significant maritime threat. India has multiple concerns about China in the Indian Ocean.

One, already alive, is Chinese activities in India’s Exclusive Economic Zone (EEZ), others are deep into marine waters of the Indian Ocean. Chinese have arrived with all their war tactics – tangible and intangible. A multidimensional war is being waged against India.

The link to join the course : Online Courses

The indirect-war elements are conspicuous in Chinese actions against India blazing, physical war, perception war, information war, bio-war, economic war, and cyberwar. India is one of the world’s most cyber-attacked countries with China being the major force behind the attacks.

China has steadily brought Indian security under pressure through unconventional instruments, like reengineering the cross-border flows of rivers, and nibbling away at disputed Himalayan territories. China engages in every warfare possible to strike at core Indian interests.

“If India is weakened militarily and economically, its value as a counterweight to China and the broader US goal of countering China’s regional influence would also be undermined,” writes Daniel S. Markey, Council on Foreign Relations.

A part of the Chinese strategy is to use Pakistan to keep India from emerging as a rival and to wear India out with varied protests domestically. For this, China keeps funding political parties to ward off the advent of a nationalistic government with deep strategic interest towards making India a global power.

The concept entails actions that fall just short of war. Others have termed this warfare technique an ‘indirect war’. The purpose is to induce exhaustion in the perceived enemy without evoking any direct resistance.

For this purpose, China uses grey-zone warfare, a manoeuvre at which the country has become an expert, especially against Taiwan.

Apple Daily’s death at the hands of Chinese Communist Party will likely have a chilling effect on the freedom of press.

Without bearing any tangible international costs, China has step-by-step, dismantled Hong Kong’s freedoms in violation of its UN-registered treaty with Britain. Although China’s size in the world market may be just half of that of the USA, the countries that are most affected by China are its neighbouring Asian economies and the resource-exporting countries.

It is thus established that China’s main influence so far has been as a regional force and not much as a global force as China intends to be.

Having developed a strategic identity, China is aggressively seeking to venture into the global arena. With Chinese, being an official language of the United Nations, and China, having secured a permanent membership at the UN, it is indicative of the fact that it is China’s officialized move to further the agenda of dominance as a world power at all costs with all forms of war.