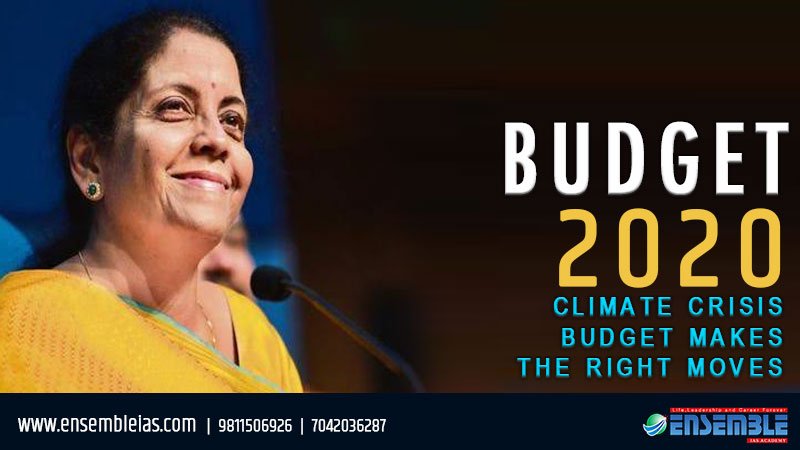 Climate crisis: Budget makes the right moves The government’s push to reduce the consumption of fossil fuels is welcome

The Union Budget, which was presented on February 1, creditably took into account one of the most pressing challenges of our time — the climate crisis. With the implementation of the Paris Agreement commitments beginning on January 1, 2021, finance minister Nirmala Sitharaman made a concrete push for solar energy and clean air and signalled the end for old and polluting thermal power plants.

While the environment ministry’s budget is proposed to be increased by nearly 5% to ₹3,100 crore over the ₹2,955 crore in the last year, the allocation to the ministry of new and renewable energy has been proposed to be increased by 10.62% from last year. The government also announced the expansion of the KUSUM scheme to enable about two million new farmers to install standalone solar pumps. Importantly, the finance minister also emphasised on enabling farmers to use their barren lands for installing grid-connected solar pumps.

These steps are welcome. India is a climate-vulnerable country, and the nation must opt for a greener economic path if it wants to avoid the deleterious effects of changing climate, and also to meet the 2030 Sustainable Development Goals. However, the budget, many experts feel missed out the replenishment of the much-needed National Adaptation Fund for Climate Change.

The fight against the climate crisis will be a long-drawn affair. But, as the minister said, India has submitted its Nationally Determined Contribution, under the Paris Agreement, on a “best effort” basis, bearing in mind the development imperative of the country. She also promised that the government is committed to taking actions in various sectors to reduce fossil fuel consumption. This promise to stay the course is commendable, considering India’s needs to grow and pull people out of poverty.