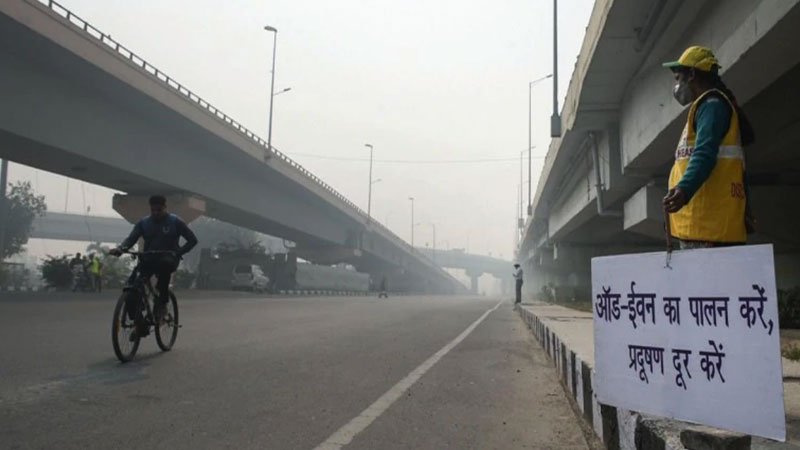 Delhi’s Air Cleaner: The AQI in Delhi fell 243 points between Friday and Sunday, and from severe to poor in less than 24 hours. Social media buzzed with photos of a clear sky and a bright day, which had eluded Delhi for at least a week.

Delhi Chief Minister Arvind Kejriwal, who had put the blame for the toxic air on Punjab and Haryana for failing to control crop stubble burning, posted a photograph of the clear skies on Sunday and tweeted, “We live in such a beautiful city. Imagine, if the stubble burning were to stop, our skies will look like this all year round and our health will also improve.”

Was it just a dip in the number of farm fires that helped clear Delhi’s air within hours? Experts say it takes a lot more than that to explain Delhi’s air quality.

According to officials at the Central Pollution Control Board, a change in wind direction and a sudden increase in wind velocity were the main reasons behind Delhi going from severe to poor in a little over a day. Wing blowing northwest brings pollution from Punjab and Haryana to Delhi; on Friday and Saturday, the direction changed to northerly.

“On Friday, the average wind speed in Delhi was under 10 km/hr. Because of an active western disturbance, the wind speed gradually rose and on Saturday it was around 12 km/hr. By late Saturday night, an even bigger increase in wind speed was seen and within hours, the air quality improved,” said a senior IMD official. On Sunday, the wind speed was around 35 km/hr. “At this speed, pollutants 250 km away can reach a spot within 8 hours and also be flushed out as quickly if the wind speed holds.” Air quality deteriorates or improves for a variety of reasons, the main being emissions. In Delhi, vehicular emissions, road and construction dust, waste burning and industrial pollution play key roles. Add to this Delhi’s location — on the Indo-Gangetic Plain (IGP), the most polluted belt in the country.

“Pollution is not Delhi’s problem alone. If we plot the most polluted cities in India on a map, most will fall on the IGP. This is because of the predominant wind direction and the way dust travels. On Sunday, for example, when Delhi’s air quality improved significantly because of strong winds, Kolkata’s AQI went from moderate to poor,” said Dipankar Saha, former air laboratory head at CPCB.

An official at IMD Chandigarh said: “Delhi gets polluted due to its own base pollution levels. With the onset of winter, the air’s carrying capacity for pollutants increases,and if winds are slow, it does not disperse, effectively trapping pollution in Delhi.”

A look at the contribution of stubble burning to Delhi’s air, calculated by SAFAR shows that farm fires’ contribution to PM2.5 levels was less than 150 micrograms per cubic metre for nearly a month, including on severely polluted days.

On November 12, when PM2.5 concentration was nearly 400 µg/cu. m, stubble burning contributed around 100 µg/cu. m. But on November 15, when PM2.5 again touched 400, farm fires’ share fell to around 50 (Figure 1). Days with the most farm fires were not the days with the highest pollution. On November 5, Punjab and Haryana saw more than 6,000 fires, but Delhi’s AQI was in the very poor range with the stubble burning contributing 12% to PM2.5.

“To say that farm fires in Punjab do not affect air quality in Delhi is wrong but to say that only farm fires spoil Delhi’s air is equally wrong,” a CPCB official said.

Fire maps based on NASA satellite images show an increase in the number of active fires between November 14 — when Delhi saw the worst air quality of the season so far with an AQI of 463 — and November 18. This is bad news for Delhi, with wind expected to slow down and blow from the northwest and west.

According a source in the Punjab Agriculture Department, the crop-stubble burning season is at its fag end. Agriculture Secretary K S Pannu said the state expects farm fire incidents to stop completely by the end of the week.