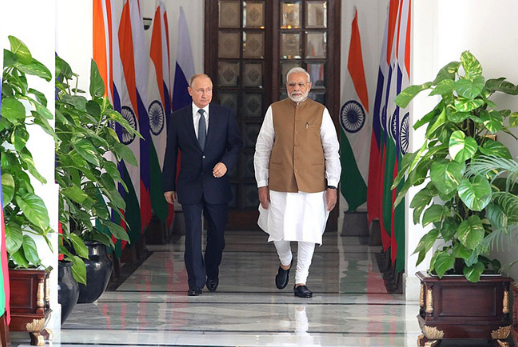 While there is no denying divergences in the relationship, both sides still have significant areas of cooperation — in the bilateral, regional and global arenas — which must be harnessed. Thus, taking a long-term view of the situation, as India develops ties with other like-minded powers to deal with the rise of China, it must also strengthen its special, privileged strategic partnership with Russia.

Read More: On rich countries and carbon emissions
But Russia’s role in meeting India’s defence requirements during the stand-off with China, and the two visits of defence minister Rajnath Singh to Moscow were seen as positive developments. Carrying forward the discussion, the Lavrov-Jaishankar meeting covered a wide range of bilateral, regional and global issues, with preparations now underway for the Narendra Modi-Vladimir Putin annual summit later this year.

The high-level engagement is particularly important in the India-Russia relationship as it remains driven by top-level interaction. Amid a changing world order, the need to strengthen and diversify bilateral ties makes the 2021 summit critical in determining the future direction of the partnership. As Jaishankar noted, the “context” of his talks with Lavrov was that of “global political changes” characterized by the “rebalanced nature of international relations”.

A feature of this rebalancing has been Russia’s return as an influential power in world affairs, its turn to the east, and China emerging as its key external partner. This has also been evident in Lavrov’s visits in the first three months of 2021 alone, where he has been to the United Arab Emirates, Qatar, Saudi Arabia, China, South Korea and Tajikistan (for the Heart of Asia conference), with a trip to Iran scheduled for mid-April. The India visit, where the minister was accompanied by special envoy on Afghanistan, Zamir Kabulov, was followed by one to Pakistan amid the push towards an Afghan peace agreement.

Each of the geographies covered during these visits remain critical areas of interest for India, underscoring the need for engagement with the former superpower on issues of mutual strategic interest. Moscow might not always be the most powerful player, but it retains significant capacity to act both as a spoiler and a facilitator in Eurasia, and has seen a resurgence of influence in West Asia.

An acknowledgement of this was evident in the detailed discussion on regional and global issues between the two foreign ministers. While both India and Russia will continue to pursue their respective trajectories in world affairs, coordination on mutually beneficial issues will be vital in this period of flux in the global system. In this regard, India shared its views on the Indo-Pacific, where Russia has significant reservations. While differences persist, a frank discussion offers the opportunity to avoid misinterpretation of intentions and allows for exploration of potential areas of cooperation. India insists that the former superpower is an important partner in its Act East policy, also because a more balanced Russia-China relationship is in its interests.

Another area of focus was Afghanistan. Worried about the impact of an unstable Afghanistan on its security, India needs sustained engagement with the major powers engaged in peace efforts. In this regard, the decision to have Kabulov stay in regular contact with India is a positive development, even as Moscow improves in engagement with Pakistan with an eye on Afghanistan. Given Russia’s assurance to India about no military hardware supply to Pakistan, New Delhi would expect that the offer of military equipment for counter-terrorism to Islamabad does not upset the strategic balance.

Looking at the broader context of Russian foreign policy and pragmatically assessing the bilateral ties offers India a chance to focus on promoting mutual interests. While there is no denying divergences in the relationship, both sides still have significant areas of cooperation — in the bilateral, regional and global arenas — which must be harnessed. Thus, taking a long-term view of the situation, as India develops ties with other like-minded powers to deal with the rise of China, it must also strengthen its special, privileged strategic partnership with Russia.