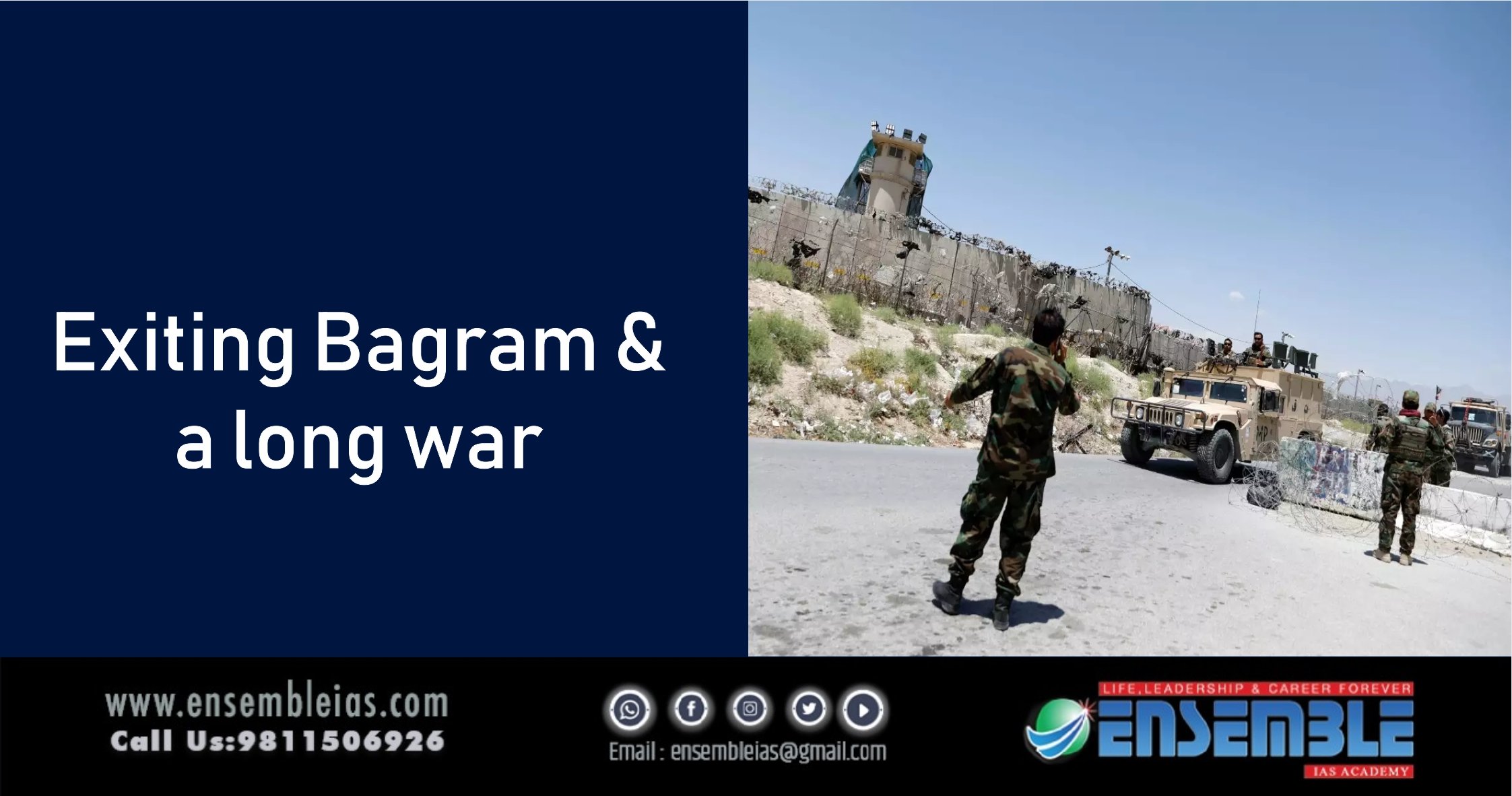 Last week, the US and allies exited Bagram airbase, the centrepiece of their presence in Afghanistan. Tracing the history that underlines its significance for Afghanistan, the former USSR and the US over the years.

Arrivals and departures in Afghanistan have always been full of portents, announced with a certain amount of trepidation and unease.

And two departures last week have not gone unnoticed.

To the world, he will always be the warmonger who invaded Iraq in 2003 in search of Saddam Hussein’s weapons of mass destruction that were never there. But Afghanistan remembers Rumsfeld for reasons more than the hunt for the al-Qaeda and their Taliban hosts.

On October 7, 2001, less than a month after the 9/11 attacks, Rumsfeld, accompanied by General Richard Myers, Chairman of the Joint Chiefs of Staff, announced the start of the invasion of Afghanistan.

“While our raids today focus on the Taliban and the foreign terrorists in Afghanistan, our aim remains much broader. Our objective is to defeat those who use terrorism and those who house or support them,” he said. “We have to create the conditions for a sustained effort that will assist those forces in the country that are opposed to Taliban and opposed to al-Qaeda.”

Two decades later, the Taliban are still around, back in strength and threatening to dislodge “those forces”. They have been waiting, and watching the US and NATO forces leave — the second departure.

On July 2, the US and its allies exited Bagram airbase, the centrepiece of their presence in Afghanistan and the springboard for their operations there.

The Pentagon has accelerated the withdrawal from the country, hoping to complete it by August-end, much before the 9/11 anniversary deadline set by President Joe Biden. Only a small force, around 600 troops, is expected to stay behind to guard the US diplomatic compound in Kabul.

Believed to be the ancient Kapisa — the grammarian Panini referred to the city of Kapisi in the kingdom of Kapisa, and the intoxicating Kapisayana wine that was one of its famed exports – Bagram is in Parwan, one of the 34 provinces of Afghanistan, although the province to its east is now called Kapisa.

Parwan is key to the control of much of Afghanistan. The 2.6 km-long Salang tunnel, high in the Hindu Kush, connects Kabul to Mazar-e-Sharif, and other cities in the north and beyond. Highways run to Bamiyan in the west and to Ghazni and Kandahar in the south.

The airbase near the town of Bagram is a little over 60 km north of Kabul. It has always been a military base. The Soviets built the airstrip in the 1950s. These were the Cold War years when the Soviets were backing Fidel Castro in Cuba and the Americans were looking at Afghanistan with renewed interest to check the Soviets and the spread of communism.

A year after Prime Minister Daoud Khan toured the US, President Dwight Eisenhower landed at the Bagram airfield on December 9, 1959, carrying the message of “peace and friendship in freedom”. King Mohammed Zahir Shah received Ike and they drove in a motorcade through Kabul, the roads lined with cheering Afghans. That was the start of some serious US efforts to keep Afghanistan out of the Soviet constellation.

Over the years, US aid poured in and development picked up pace. In September 1963, the King visited the US and President John F Kennedy hosted a dinner in his honour.

In January 1970, Vice President Spiro Agnew, accompanied by Apollo 10 astronauts Thomas Stafford and Eugene Cernan, came to Kabul via Kathmandu and presented little pieces of moon rocks, brought by the Apollo 11 astronauts, to the King’s family. They had made the same gift in Nepal to King Mahendra — the Nixon administration, in fact, sent these gifts to 135 countries.

Murder of an envoy

But in July 1973, when the Afghan King was recuperating on the Italian island of Ischia in the Tyrrhenian Sea after an eye infection, Daoud Khan staged a coup in Kabul, abolished the monarchy and announced a republic, granting himself absolute power.

His rule did not last long. In April 1978, Daoud and his family were killed in a coup by the People’s Democratic Party of Afghanistan (PDPA), a Marxist-Leninist party backed by the Soviets. This was the Saur Revolution, a portent of what was to come next.

Ties with the US, already under strain, snapped when Adolph Dubs, the American ambassador whom everyone called Spike, was kidnapped on his way to work on a February morning in 1979. Taken to Kabul Hotel, he was killed during a rescue attempt.

The PDPA was a deeply divided party. It had split into several factions in 1967, two of which turned out to be the dominant groups — the Khalq under Nur Muhammad Taraki and, later, Hafizullah Amin and the Parcham led by Babrak Karmal. The two factions turned to the Soviets who persuaded them to present a picture of unity before the Saur Revolution.

That public bonhomie evaporated very quickly. Taraki was arrested in September 1979 by his deputy Amin and later murdered — smothered to death with pillows, it was said. It even outraged the ailing Leonid Brezhnev.

At one point, the Soviets had planned to whisk Taraki away via Bagram where they already had a presence. To keep rebels at bay, the Soviets had sent armoured units to secure the airfields in Bagram, Kabul and Shindand.

Fearful which way Amin would go, the Soviets decided to finally step in. Brezhnev ordered the Soviet 40th Army to cross into Afghanistan on December 24, 1979. Three days later, crack troops and KGB operatives descended on Tajbeg Palace in Kabul —Operation Storm 333 — and killed Amin who was still very groggy after attempts to poison him.

Babrak Karmal, the Parchamist, was installed as President. This was the beginning of the Soviet intervention in Afghanistan, the start of an unending war, the cycle of death and destruction interrupted by arrivals and departures.

For the Soviets, Bagram with its 3000-m runway became a staging post. Troops from airborne divisions were deployed there and Su-25s ran daily missions, supporting ground troops and striking at mujahideen positions. The airbase was fortified and there was construction activity to house personnel.

After the departure of the Soviets in 1989, Najibullah, who had replaced Karmal, was left to fight his own war. Although he continued to build his forces, the writing on the wall was clear. The dissolution of the USSR in December 1991 ended all aid and his air force was grounded. The final blow came when his forces lost Bagram and Charikar, capital of the Parwan province. Najibullah resigned in April 1992 and Kabul fell to the mujahideen.

As the country descended into chaos, mujahideen leaders carved up the land, grabbing military installations, aircraft and hardware. The Panjshiris led by Ahmed Shah Massoud, the nemesis of the Soviets, took Bagram.

The arrival of the Taliban, a force of steely seminarians raised by Pakistanis looking to control Kabul in their quest for a bridge to Central Asia, changed the landscape and power equations. The Taliban took Kandahar in November 1994 and, in the next two months, overran large swathes in 12 provinces.

In September 1996, the Taliban seized Kabul and dragged Najibullah and his brother out of the UN compound where he had sought shelter – he had almost fled to India but Uzbek warlord Abdul Rashid Dostum switched sides and blocked his passage to the airport. The end was gruesome: Najibullah was tortured, castrated, and his body dragged through the streets of Kabul before being hanged from a traffic signal post.

Massoud had retreated to Panjshir but controlled Parwan and provinces in the north. Over the next few years, Bagram took a hit. Fighting for the airbase would be so intense that people of the town would point to the runway to identify the warring groups at each end.

The sides of the approach road to the airbase had been heavily mined. Demining teams that went in after the ouster of the Taliban in 2001 used to place pebbles painted white and red as markers by the roadside — white for areas declared safe, and red to warn people not to tread.

Bagram was where US and allied personnel landed after Bush and Rumsfeld ordered aircraft and troops to Afghanistan following 9/11. In November, the Special Boat Service, a special forces unit of the Royal Navy, slipped into Bagram to secure the airbase. The Northern Alliance — it was now minus Massoud, assassinated two days before 9//11 — could only protest, saying they should have been kept in the loop.

In December, IAF Il-76 aircraft were among those to land in Bagram with tonnes of supplies — India, Iran and Russia were supporting the Northern Alliance.

In the initial months of the US-led invasion, most troops were based at the airport in Kandahar. But the numbers at Bagram kept swelling, as did the base.

A new runway was built, 500 m longer than the previous one, and strong enough for military transport aircraft to land — from the C-5 Galaxy to the C-17 Globemaster.

The sprawling airbase soon became the centrepiece of US military operations across Afghanistan. By 2009, it could accommodate 10,000 troops. It transformed into a township of sorts, and even had a Burger King outlet.

The airbase also has a grim story. A disused hangar was turned into a detention facility —the Americans called it the Bagram Collection Point — to hold suspected combatants. At least two Afghan detainees were said to have died in 2002 due to torture and abuse. A more permanent facility was completed in 2009. Three years later, on President Hamid Karzai’s order, the Parwan Detention Facility was turned over to the Afghan authorities. At the time of the transfer, there were 3,000 detainees.

The US departure from Bagram has already raised the stakes in Afghanistan. With the Taliban on the move, uncertainty and anxiety have returned to the land.