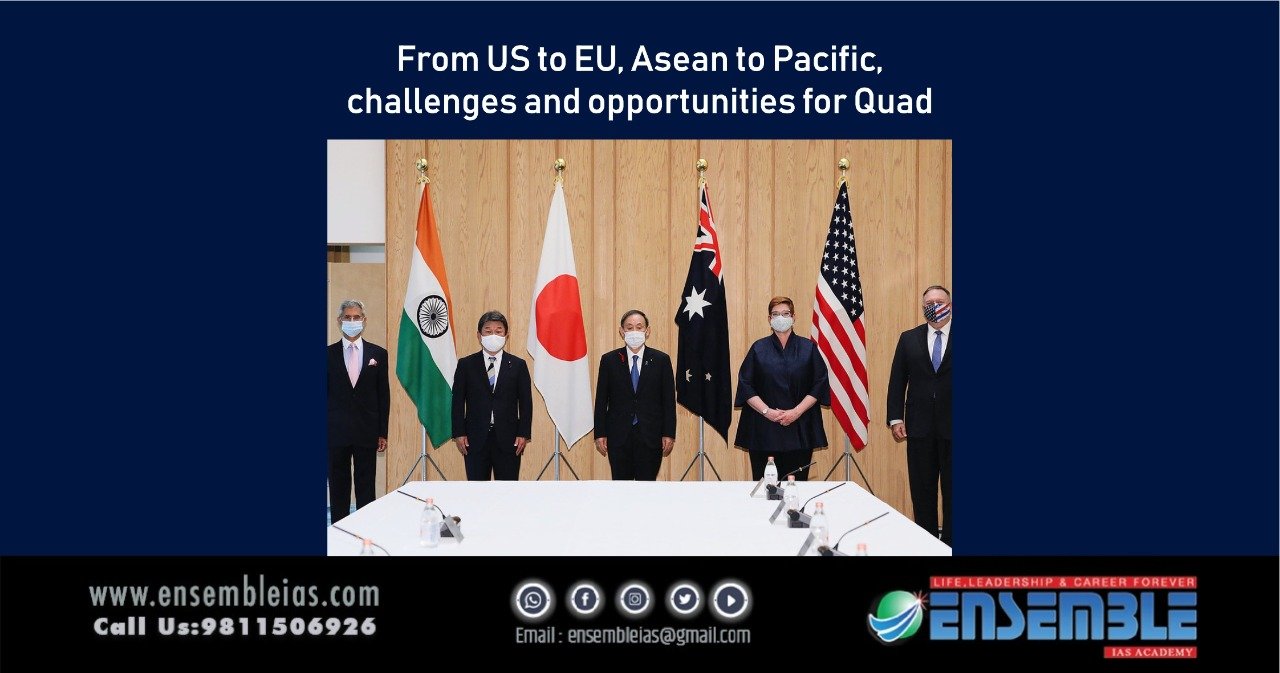 From US to EU, Asean to Pacific, Challenges and Opportunities for Quad

From US to EU, Asean to Pacific, Challenges and Opportunities for Quad: Three months after its virtual summit on March 12, the Quad — composed of the United States, India, Japan and Australia — is attaining greater consolidation, even as its challenges acquire a sharper edge

Three months after its virtual summit on March 12, the Quad — composed of the United States, India, Japan and Australia — is attaining greater consolidation, even as its challenges acquire a sharper edge. The coalescing of four maritime democracies in the Indo-Pacific to address the China challenge compels global attention.

Quad has begun planning for its first in-person summit, to be held in Washington. The goal is to strengthen “The Spirit of the Quad” (the title of the summit’s joint statement) through expansion of partnership in vaccines, climate and critical technologies. Cooperation for infrastructure development, supply chain resilience and maritime security are also emerging as priorities.

In this context, Quad’s four dimensions merit a close look.

First, India-US ties received a boost during external affairs minister S Jaishankar’s substantive discussions in Washington in late May. His interactions with key figures of the administration, Congress and corporate America focused attention on advancing cooperation in the fight against Covid, fine-tuning the strategy to deal with China, and deepening of bilateral security, defence, and economic relations.

His informal meeting with Director of National Intelligence, Avril Haines, underlined the vital significance of intelligence-related cooperation in countering terrorism, the dynamic in Afghanistan after US troop withdrawal, and China’s aggressive postures in eastern Ladakh and the Indian Ocean. These consultations have resulted in a closer convergence, which is good news for Quad.

Second, the European dimension in the geopolitical matrix has assumed special significance. Leading European countries — France, Germany, United Kingdom and the Netherlands — have been working on their Indo-Pacific policies. This was followed by the European Union (EU) announcing its Indo-Pacific strategy in April. EU is set to “reinforce its strategic focus, presence and action” in the region, based on the promotion of democracy, rule of law, human rights and freedom of navigation.

However, EU made it clear that its Indo-Pacific strategy was “not anti-China.” India helped its own case with the historic India-EU Summit (on May 8), aiming to expand its relationship with an important global player.

Third, the ASEAN dimension represents the Quad’s vulnerability. ASEAN nations have been largely silent on the Quad’s assertiveness. While China’s continuing aggression is ignored, Quad’s will to constrain it is seen as a new cold war.

Despite daily provocations ranging from harassment of Philippine fishermen to Malaysian air space violations, Chinese measures are underplayed, partly out of fear and partly economic temptations.

A major ASEAN grievance is the Biden administration’s delay in connecting with ASEAN capitals at the highest political levels. Another is the Quad’s relative silence and inaction on Myanmar, even as ASEAN’s mediation initiative has received public support from China.

Four, the Pacific dimension goes beyond the US working closely with Japan, South Korea and the Philippines to enhance maritime security coordination concerning China. It relates to a promising turn for the Quad in the South Pacific.

Against the recent background of public differences on China between Australia and New Zealand, Prime Ministers Scott Morrison and Jacinda Ardern held cordial discussions in Queenstown on May 31. A common way forward to address the China challenge was crafted. In their joint statement, they expressed “serious concern” over developments in the South China Sea as well as human rights violations in Hong Kong and Xinjiang. Beijing reacted adversely by expressing its “firm opposition” to the joint statement.

Two additional policy suggestions may help. First, as unlikely as it is at the moment, despite a deep-seated hostility towards Russia, the US administration needs to initiate a rapprochement with Moscow. The Joe Biden-Vladimir Putin Summit in Geneva on 16 June offers an opening. Will American policymakers remember how the Richard Nixon-Henry Kissinger team executed a strategic breakthrough in 1971, by weakening China’s alliance with Soviet Union? Today, Russia needs to be weaned off China.

Second, Quad’s conflict with China is not only about maritime security and rule of law, but also about economy and new technology. A comprehensive plan is necessary for both facets.