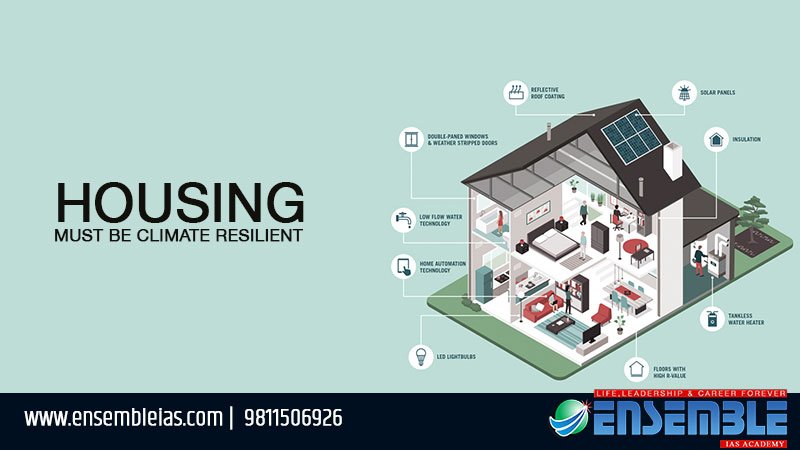 Housing : Whatever happens in our nature is not always in the control of human being. In many instances we do see the global warming taking place not only in India but throughout the world. For example – Delhi recorded its second warmest February since 1901, (with a mean maximum temperature (MMT) of 27.9 degrees Celsius, eclipsed only by 2006 when MMT was 29.7 degrees, as announced by the India Meteorological Department).

Thus to adapt to a warming world, India needs to construct buildings that are

This happened because of clear skies, caused by fewer western disturbances. The higher temperature causes many peripheral areas putting chain effects such as:

To mitigate this problem, the principles that must be followed —

To kickstart this green housing revolution, states must adopt the Eco-Niwas Samhita Part I, an energy conservation building code for residential buildings, which was launched by the Bureau of Energy Efficiency in 2018. This sets standards to

Unfortunately, the codes are voluntary, and many states have not dovetailed them into their by-laws.

2nd March 2021 | UPSC GS Paper-3 |  Editorial | Housing |This article is based on “Housing must be climate-resilient”,

published in Hindustan Times on 02/03/2021. In this article the importance of climate and many of its factors that affect our buildings has been explained.