Malappuram: The list, based on data from the United Nations Population Division, appears unusual; this is because the total fertility rate (TFR, the number of children a woman is likely to have in the childbearing age of 15-49) in Kerala is 1.8 as per NITI Aayog data from 2016 — below the replacement rate of 2.1.

In a chart posted on its official Twitter handle last week, The Economist put Malappuram at the top of the “Top ten fastest-growing cities” in the world, based on “Total % change, 2015-20 forecast”. The list, based on data from the United Nations Population Division, appears unusual; this is because the total fertility rate (TFR, the number of children a woman is likely to have in the childbearing age of 15-49) in Kerala is 1.8 as per NITI Aayog data from 2016 — below the replacement rate of 2.1.

Another Kerala city, Thrissur, is No. 13, and the capital Thiruvananthapuram is No. 33 on the UN list. Tiruppur in Tamil Nadu — which has an even lower TFR of 1.6 — is No. 30. Surat in Gujarat (TFR of 2.2) is No. 27. There is no representation on the list from high population growth states like Bihar and UP.

So, does “fastest growing” refer to population? How is a “city” defined?

The UN list refers to “urban agglomerations” (UA), which are extended areas built around an existing town along with its outgrowths — typically villages or other residential areas or universities, ports, etc., on the outskirts of the town. The Census defines a UA as “a continuous urban spread consisting of a town and its adjoining urban outgrowths or two or more physically contiguous towns together”.

Thus, the UA of Greater Mumbai includes Greater Mumbai and the municipal corporation areas of Mira-Bhayander, Thane, Navi Mumbai, and Kalyan-Dombivali, plus the municipal council areas of Ulhasnagar, Ambernath and Badlapur. The National Capital Territory of Delhi is a UA that includes the Municipal Corporation of Delhi (MCD) and New Delhi Municipal Council (NDMC) areas, as well as 107 “Census towns” — erstwhile surrounding villages where more than 75% of the population is now engaged in non-agricultural pursuits. 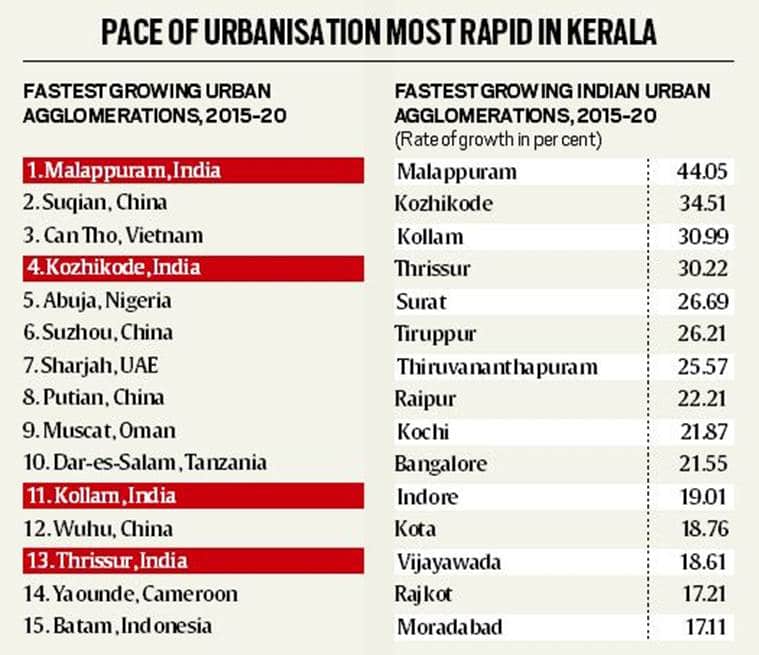 The Economist has listed the rate at which the populations of the UAs are expected to increase between 2015 and 2020. Since data on India and many other countries were not available for 2015 (the last Census in India was in 2011), the UN report used projections of UAs’ populations — estimates based on past population growth data. The rate of growth between 2015 and 2020 thus calculated provides a measure of the pace of urbanisation.

How does urban population grow?

Urban populations can grow when the birth rate exceeds the death rate (natural growth); when workers migrate to the city in search of jobs; when more areas get included within the boundaries of the city; or when existing rural areas are reclassified as urban. The low fertility rate in Kerala means the increase in the population of Malappuram and other cities is not because women are having more children; rather it is because more villages are being transformed into towns, and city borders are expanding.

According to the Census definition, an urban area is either a census town (CT) or a statutory town (ST). An ST is any place with a municipal corporation, municipal council, or cantonment board. A CT can be a village with “urban characteristics” — a population more than 5,000, population density more than 400 people per sq km, and with more than 75% of the population not engaged in agriculture for their livelihood. When a village becomes a CT, its population is included in the urban population of the district.

Could migration have caused the increase?

Migration can either increase or decrease the population of a town. Kerala sees both emigration — migration from the state to other places — and immigration — the migration of workers to the state, said Shamindra Nath Roy of the Centre for Policy Research. Also, Roy said, “the remittances that emigrants send allow the residents of villages to move away from agriculture, which changes the status of a village to census town.” 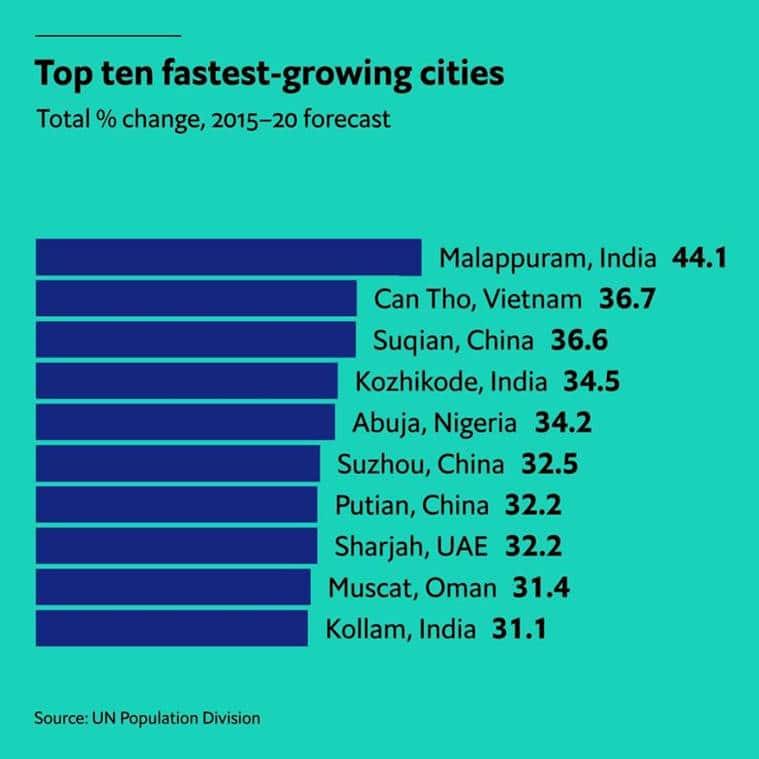 These cities are seeing rapid urbanisation, and the main reason is the inclusion of new ar

eas in the UA’s limits.

In 2001, there were two municipal corporations within the UA of Malappuram. In 20

11, the number of municipal corporations had doubled to four, and an additional 37 CTs were included within Malappuram. The population of the UA (excluding the residents of the outgrowths) increased almost 10 times in the same period — from 1,70,409 to 16,99,060 — obviously because of the inclusion of existing urban areas in the town.

Why is this not seen elsewhere in India?

In Kerala, urbanisation is driven by a move away from agriculture, which leads to a chan

While the pace of urbanisation has been slower in the North, some unnaturally high increases in the population can be expected after the 2021 Census — because in some cases, villages on the peripheries w

ere brought within the administrative boundaries of the cities. In 2017, Maharashtra approved the inclusion of 34 villages in the Pune Municipal Corporation; comparing the population of Pune in 2011 to that in 2021 would therefore, be like comparing apples and oranges, since the city itself will have changed in that period. Similarly, 65 villages may be added to Ahmedabad by the end of 2020.

But is this kind of increased urbanisation good for the economy?

Yes and no. Urbanisation leads to the growth of cities, which are sites of infrastructure like universities, hospitals, and public transport facilities. There are more opportunities for the youth, which is why they attract young people and entrepreneurs. In India, people moving to cities leave behind (to some extent) caste and class divisions that dominate life in the villages, and can hope to climb up the social ladder.

However, unplanned urbanisation can be “exclusionary”, making it difficult for migrants to live there given the high cost. “Unregulated housing, lack of reliable public transport, and longer commutes within these towns puts a strain on the meagre resources of migrants,” said Kanhu Charan Pradhan of CPR, who studies patterns of urbanisation, interaction between rural and urban areas, and migration in India.