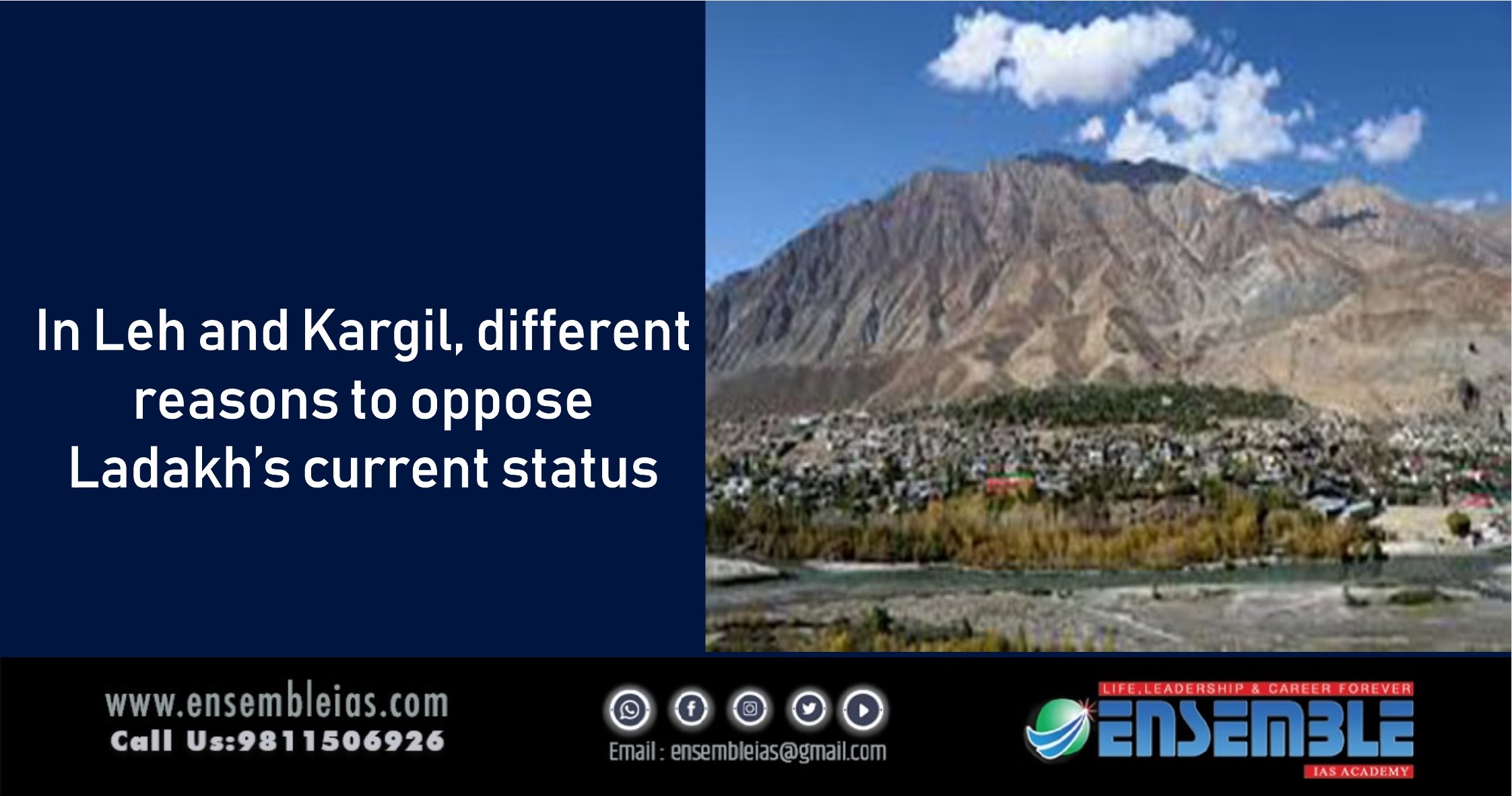 In Leh and Kargil, different reasons to oppose Ladakh’s current status : What both Ladakh districts fear is that alienation of land, loss of identity, culture, language, and change in demography, will follow their political disempowerment.

When Jammu and Kashmir was bifurcated into two Union Territories on August 5, 2019, Ladakh was seen welcoming the reorganisation. Its MP, Jamyang Tsering Namgyal of the BJP, declared in the Lok Sabha that “the PM… has understood the feelings of the people and has given the region respect. He has given an address on the political aspirations, developmental spirit and even recognized the contribution of the people from the region of Ladakh.”

As it turned out, that statement papered over Ladakh’s concerns, and the different demands from its two districts, Leh and Kargil. These demands have come to the fore at different times over the last two years, but the government appears to be paying more attention to them now, at the same time as its outreach to the Jammu and Kashmir political leadership.

Indications are that a committee under Minister of State for Home G Kishan Reddy will seek to address these demands from Ladakh. The formation of such a committee had been announced back in January, but has been in cold storage since.

Leh and Kargil, not alike

Of Ladakh’s two districts, the August 2019 changes were immediately opposed by the people of Kargil, where the leaders of the majority Shia population demanded that the district should remain part of J&K, and that special status be restored to safeguard the rights of Kargil people over their land and employment opportunities.

Opposition from Leh came later. A UT for Ladakh had been a long-standing demand in Buddhist majority Leh, which believed it was marginalised in the larger state of J&K. But what Leh leaders did not bargain for was the complete loss of legislative powers. Earlier, the two districts each sent four representatives to the J&K legislature. After the changes, they were down to one legislator — their sole MP— with all powers vested in the UT bureaucracy. Unlike the UT of J&K, Ladakh was a UT without an assembly.

What both Ladakh districts fear is that alienation of land, loss of identity, culture, language, and change in demography, will follow their political disempowerment.

Leh and Kargil have separate Autonomous Hill Development Councils, set up under the Ladakh Autonomous Hill Development Councils Act, 1997. However, the AHDCs have no legislative powers. The councils are elected, and have executive powers over the allotment, use and occupation of land vested in them by the Centre, and the powers to collect some local taxes, such as parking fees, taxes on shops etc. But the real powers are now wielded by the UT administration, which is seen as even more remote than the erstwhile state government of J&K.

Last year, as the five-year term of the Leh Ladakh AHDC neared conclusion, and elections were scheduled, a group calling itself the People’s Movement for Sixth Schedule, an umbrella of political parties and religious organisations including the all-powerful Leh-based Ladakh Buddhist Association, put forth its demand for an autonomous hill council under the Sixth Schedule, modelled on the lines of the Bodoland Territorial Council in Assam.

The Sixth Schedule is a provision of Article 224(A) of the Constitution, originally meant for the creation of autonomous tribal regions in Assam, Meghalaya, Mizoram and Tripura. Hill councils under this provision have legislative powers.

All political parties in Leh, including the BJP, announced a boycott of the LAHDC-Leh elections. They called off the boycott after a meeting with Home Minister Amit Shah in Delhi at which they were promised “Sixth Schedule-like” protections. Elections were held to the LAHDC-Leh, in which the BJP won a majority of the seats, but fewer than in the 2015 election.

The LAHDC-Kargil elections are not until 2023. Significantly, the Kargil political leadership, grouped as the Kargil Democratic Alliance — it includes representatives from the local units of National Conference, PDP, Congress as well two influential Shia seminaries, the Islamia School Kargil and the Imam Khomeini Memorial Trust — did not join in the demand for the Sixth Schedule.

But with no progress on Leh’s demand for Sixth Schedule protections, the Leh leadership — including former MP Thupsten Chewang and former J &K minister Chering Dorjay Labrook, both earlier with the BJP — has now upped its demands. On June 24, as a delegation from J&K held talks with Prime Minister Narendra Modi and Home Minister Amit Shah in Delhi, Leh leaders addressed a press conference at Thiksey monastery asking for a Union Territory with an elected Assembly.

Meanwhile, a KDA delegation that held talks with MoS Reddy on July 1 demanded full statehood to Ladakh, as well as restoration of special status with Article 35 and 370 of the Constitution. Asgar Ali Karbalai, the head of the LAHDC- Kargil, who led the delegation, said other issues discussed included protections for language, culture, land and jobs, plus a long-standing demand for a route between Kargil and Skardu in territory under Pakistan in Gilgit- Baltistan.

There has been some disquiet in Leh at how the Home Ministry seems to be dealing with the political leadership of the two Ladakh districts separately. But if the committee with planned representation from both districts is set up, it would enable leaders from Leh and Kargil to work out a common negotiating front, leaders from both sides said.