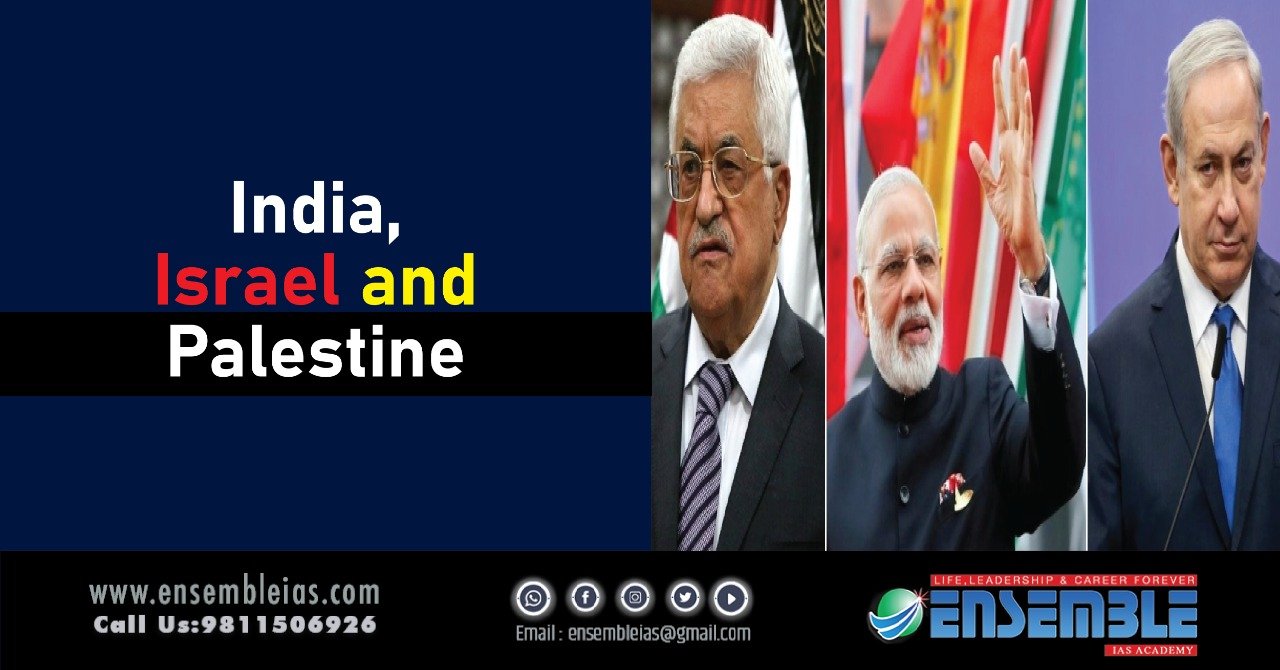 India’s statement at UNSC seeks a balance between its old ties with Palestine and growing relations with Israel. Tracing India’s journey through the world’s oldest conflict, from Nehru years to Modi regime.

On Monday, India’s permanent representative to the United Nations, T S Tirumurti, made a carefully crafted statement at the UN Security Council “open debate” on the escalating Israel-Palestine violence, striving to maintain balance between India’s historic ties with Palestine and its blossoming relations with Israel.

The statement, the first India has made on the issue, appears to implicitly hold Israel responsible for triggering the current cycle of violence by locating its beginnings in East Jerusalem rather than from Gaza. The request that both sides refrain from “attempts to unilaterally change the existing status quo including in East Jerusalem and its neighbourhoods” seems to be a message to Israel about its settler policy.

The statement was also emphatic that “the historic status quo at the holy places of Jerusalem including the Haraml al Sharif/Temple Mount must be respected”. The site, administered by Jordan, is revered in both Islam and Judaism. Jewish worshippers are not allowed inside, but have often tried to enter forcibly.

The balancing was evident in the pointed condemnation of the “indiscriminate rocket firings from Gaza” on civilian targets in Israel, but not of the Israeli strikes inside Gaza; the customary omission since 2017 of any reference to East Jerusalem as the capital of a Palestinian state; and the hyphenation of “Haram Al Sharif/Temple Mount”, equating claims of both Israel and Palestine.

India’s policy on the longest running conflict in the world has gone from being unequivocally pro-Palestine for the first four decades, to a tense balancing act with its three-decade-old friendly ties with Israel. In recent years, India’s position has also been perceived as pro-Israel.

From Nehru to Rao

The balancing began with India’s decision to normalise ties with Israel in 1992, which came against the backdrop of the break-up of the Soviet Union, and massive shifts in the geopolitics of West Asia on account of the first Gulf War in 1990. That year, the Palestinian Liberation Organisation (PLO) lost much of its clout in the Arab world by siding with Iraq and Saddam Hussein in the occupation of Kuwait.

The opening of an Indian embassy in Tel Aviv in January 1992 marked an end to four decades of giving Israel the cold shoulder, as India’s recognition of Israel in 1950 had been minus full diplomatic ties.

PM Jawaharlal Nehru’s reasoning for the decision to recognise Israel was that it was “an established fact”, and that not doing so would create rancour between two UN members. But for long, all there was to show for the bilateral relationship was a consulate in Mumbai, established in 1953, mainly for issuing visas to the Indian Jewish community, and to Christian pilgrims. This too shut down in 1982, when India expelled the Consul General for criticising India’s foreign policy in a newspaper interview. It was permitted to reopen only six years later.

In 1948, India was the only non-Arab-state among 13 countries that voted against the UN partition plan of Palestine in the General Assembly that led to the creation of Israel. Scholars ascribe various reasons for this India’s own Partition along religious lines; as a new nation that had just thrown off its colonial yoke; solidarity with the Palestinian people who would be dispossessed; and to ward off Pakistan’s plan to isolate India over Kashmir. Later, India’s energy dependence on the Arab countries also became a factor, as did the sentiments of India’s own Muslim citizens.

The relationship with Palestine was almost an article of faith in Indian foreign policy for over four decades. At the 53rd UN session, India co-sponsored the draft resolution on the right of the Palestinians to self-determination. In the 1967 and 1973 wars, India lashed out at Israel as the aggressor. In the 1970s, India rallied behind the PLO and its leader Yasser Arafat as the sole and legitimate representative of the Palestinian people.

In 1975, India became the first non-Arab country to recognise the PLO as the sole representative of the Palestinian people, and invited it to open an office in Delhi, which was accorded diplomatic status five years later. In 1988, when the PLO declared an independent state of Palestine with its capital in East Jerusalem, India granted recognition immediately. Arafat was received as head of state whenever he visited India.

Four years after the Narasimha Rao government established a diplomatic mission in Tel Aviv, India opened a Representative Office in Gaza, which later moved to Ramallah as the Palestinian movement split between the Hamas (which gained control of Gaza) and the PLO. New Delhi remained firmly on the side of the PLO, which was seen as ready for a political solution, and had accepted the two-state solution.

India voted in favour of the UN General Assembly resolution in October 2003 against Israel’s construction of a separation wall. It voted for Palestine to become a full member of UNESCO in 2011, and a year later, co-sponsored the UN General Assembly resolution that enabled Palestine to become a “non-member” observer state at the UN without voting rights. India also supported the installation of the Palestinian flag on the UN premises in September 2015.

For two-and-a-half decades from 1992, the India-Israel relationship continued to grow, mostly through defence deals, and in sectors such as science and technology and agriculture. But India never acknowledged the relationship fully.

There were few high-profile visits, and they all took place when the BJP-led NDA-1 under Prime Minister Atal Bihari Vajpayee was in office. Israel is Hindutva’s ideal of a “strong state” that deals “firmly” with “terrorists”. Even back in the 1970s, the BJP’s forerunner Jana Sangh had made the case for ties with Israel.

During the UPA’s 10 years in office, the balancing act intensified, and Mahmoud Abbas, head of the Palestinian Authority that administers the West Bank, visited in 2005, 2008, 2010 and 2012.

It was during NDA-2 that the government under Prime Minister Narendra Modi decided to take full ownership of the relationship with Israel. The first indication of the new phase came with an abstention by India at the UN Human Rights Council on a resolution welcoming a report by the HRC High Commissioner. The report said it had evidence of alleged war crimes committed by Israeli forces and Hamas during the 2014 airstrikes against Gaza that killed over 2000.

The abstention was conspicuous because in 2014, India had voted for the resolution through which the UNHRC inquiry was set up. In 2016, India abstained again at on a UNHRC resolution against Israel. But the big change was the status of the historic city that both Israel and Palestine claim.

A visit by PLO chief Mahmoud Abbas in 2017 became the occasion for New Delhi to signal the substantive shift. Until then, in various statements, with its expression of support for a two-state solution, India had always included a line in support of East Jerusalem as the capital of a Palestinian state.

The reference to East Jerusalem went missing in Modi’s statement during Abbas’s visit. Pranab Mukherjee, who in 2015 became the first Indian President to visit Israel, with a first stop at Ramallah, had also reiterated India’s position on the city as the capital of an independent Palestine.

In February 2018, Modi became the first Indian Prime Minister to visit Israel. His itinerary did not include Ramallah. The word then was that India had “de-hyphenated” the Israel-Palestine relationship, and would deal with each separately. Meanwhile, India continues to improve ties with Arab countries, especially Saudi Arabia and the UAE, and feels vindicated by the decision of some Arab states to improve ties with Israel.

In fact, the de-hypenhation is actually a careful balancing act, with India shifting from one side to another as the situation demands. For instance, even as it abstained at UNESCO in December 2017, India voted in favour of a resolution in the General Assembly opposing the Trump administration’s recognition of Jerusalem as the Israeli capital.

At the UNHRC’s 46th session in Geneva earlier this year, India voted against Israel in three resolutions – one on the right of self-determination of the Palestinian people, a second on Israeli settlement policy, and a third on the human rights situation in the Golan Heights. It abstained on a fourth, which asked for an UNHRC report on the human right situation in Palestine, including East Jerusalem.

In February, the International Criminal Court claimed jurisdiction to investigate human rights abuses in Palestinian territory including West Bank and Gaza and named both Israeli security forces and Hamas as perpetrators. Prime Minister Netanyahu wanted India, which does not recognise the ICC, to take a stand against it on the issue, and was surprised when it was not forthcoming.

That is because India’s own balancing act is a constant work of progress. The latest statement is no different. Though it was not pro Palestine, it hardly pleased Israel. Netanyahu tweeted his thanks to all countries that “resolutely” stood by Israel and “its right to self defense against terrorist attacks”, by posting all their flags. The Tricolour was not among them.