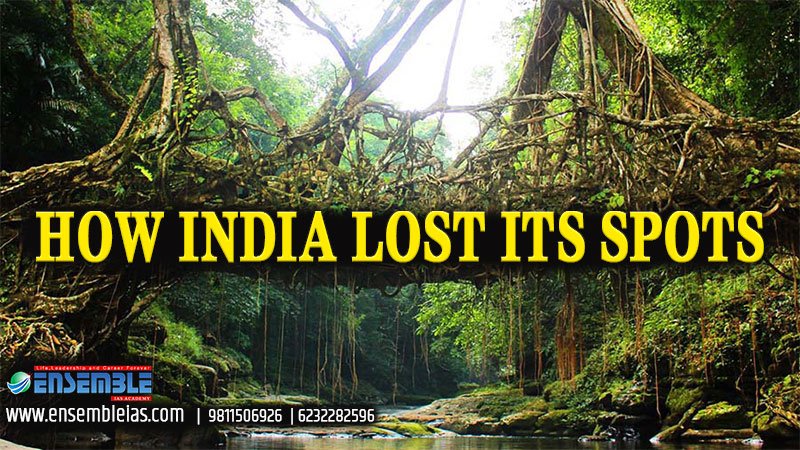 India lost its spots: Was it desertification as was recently claimed? Research suggests otherwise. These docile cats were hunted and captured indiscriminately in the 1700s and 1800s until one day not one was left.

“I was out on leave by myself, chiefly after lions. My native shikari (game tracker) came into my tent with an auspicious grin, just as I was finishing my breakfast, and said, ‘Sahib, I think I have got the big lion for you at last today; I have marked a big beast under a tree about four miles off; what it is I do not know…,’” Colonel E.A. Hardy of the 21st Hussars wrote in 1878, in his book Our Horses. The Colonel set out for his hunt, and some 30 yards away, he saw what he thought was a single large beast lying fast asleep. “I fired. To the shot up sprang six cheetahs, beautiful brutes, growling and rushing over each other, one evidently severely wounded. I was really so taken aback myself, I was stupid for a moment; but before I could determine whether to fire my second barrel or to bolt, the old shikari yelled out, ‘Come quickly for your horse, they are cheetahs, you can spear them; we’ll kill them all!’” Within a century of this book’s publication, we had indeed killed them all; the last Asiatic cheetah, the lesser-known cousin of its more famous African counterpart, was shot in 1947 by Maharaja Ramanuj Pratap Singh Deo of the little-known princely state of Koriya in present-day Chhattisgarh.

But what really sealed the fate of India’s cheetahs?

At the recent meeting of the Conference of Parties to the United Nations Convention to Combat Desertification (UNCCD COP 14), a researcher from the Indian delegation pronounced desertification as the primary cause of the extinction of the cheetah (and also the still-extant great Indian bustard) in India.

This generated great debate and critique, but also for many people a realisation that cheetahs indeed no longer existed in the country: in many Indian languages, the word cheeta is still used to refer to the leopard and is, therefore, confused with the rosetted cat.

So was desertification really the cause? Not exactly. What we know is this: two idiosyncratic traits of the animal undeniably led to its end. One, the cat was very easy to tame: it was often trained to race down and hunt animals, almost like a hound — a ‘sport’ called coursing — and so was caught in large numbers for use in such hunts. Second, cheetahs were nearly impossible to breed in captivity.

Breeding captive cheetahs was such an incredible rarity that in 1613, Emperor Jahangir formally recorded the first and only instance, up to the 20th century, of a cheetah bred in captivity anywhere in the world in the book Tuzuk-i-Jahangiri.

The earliest reference to their domestication for the sport of coursing is from Manasollasa, the 12th century chronicle of the court activities of King Somesvara III of Kalyani. The sport gained popularity across peninsular India during the medieval age. From this era emanate numerous records of retinues of cheetah trained to hunt down black bucks (India’s second fastest mammal) for a legion of nobles and princes. But their inability to breed while in captivity meant that wild cheetahs needed to be constantly trapped from their natural habitats, especially cubs, to keep the sport alive over centuries.

Charles E. Clay, a railway officer, recounts in a 1901 article how he bought a cheetah cub in South Canara in 1896 from “a couple of jungle wallahs,” which he then raised for hunting in the Deccan. The cost of a cheetah caught from the wild at the time was “anything you can agree upon, from ten rupees up”, but rose steadily with the degree of training it subsequently received.

“The price of a well-broken [or trained] hunting cheetah is from one hundred and fifty to two hundred and fifty rupees,” wrote Major Henry Shakespeare, Late Commandant of the Nagpur Irregular Force and a hunter in the 1840s.

Such was the scale of cheetahs being taken out from the wild that Emperor Akbar is said to have acquired a staggering 9,000 cheetahs for his royal menagerie during his 49-year reign in the 16th century. Eventually, somewhere around the early 18th century, the constant removal of cheetahs from the wild, especially cubs, reached a tipping point.

And so, while their prey base and habitat survived till much later, the cheetahs were already very scarce by the time the British consolidated their hold over India and started recording the occurrence of cheetahs. In a recent paper, the wildlife historian and scholar Divyabhanusinh and I recorded written references to a mere 414 individual animals between 1772 and 1997.

Another factor worked against the animal: its intrinsically docile nature. The big cat was so benign that it has been likened to a dog. It never evoked the fear that tigers, lions and leopards did. “The hunting leopard is easily tamed, about six months being required to reduce him to a complete state of obedience and to complete his training. Many of these animals, when tamed, are as gentle and docile as a dog, delighting in being petted, and quite good-tempered even with strangers, purring and rubbing themselves against their friends, as cats do. They are usually kept, when tame, on a charpai or native bedstead, attached by a chain to the wall, and are not shut up in a cage,” wrote the English naturalist W.T. Blanford, the editor of The Fauna of British India, Including Ceylon and Burma in 1888. 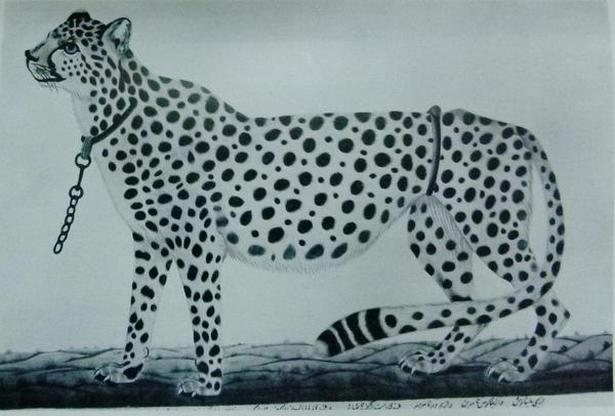 In fact, there is just a single record of a human fatality from a cheetah attack that we know of — the death of O.B. Irvine, Agent of Governor in Visakhapatnam, who died after being mauled by a captive cheetah that belonged to the Raja of Vizianagaram, during a coursing hunt in 1880. Yet, incredibly enough, this didn’t stop the British government from classifying cheetahs as “vermin” and offering rewards for their destruction. Rewards were given both for adult cheetahs and for cubs from around 1871 onwards, as environmental historian Mahesh Rangarajan has noted in his 1998 paper in the Journal of the Bombay Natural History Society. This was, perhaps, the final nail in the coffin that sealed the fate of the species in the country.

In 1951-52, cheetahs were considered de facto extinct by the Indian government. But there were some credible, albeit rare, sightings reported well into the early 1970s — two from the forests of Koriya and the adjoining Surguja in Madhya Pradesh in 1967 and 1968, and then from the open forests around a village named Danto Kalan in Jharkhand’s Hazaribagh district in 1975.

In Pakistan’s Balochistan province, the last stragglers survived right up to the late 1990s with one cheetah being reportedly shot in the Chagai plains of Balochistan in 1997; the same year, another female and two cubs were sighted around Ormara in the same province. In fact, the term ‘Asiatic cheetah’ gained currency only after the species’ extinction in India; before this, it was known as the Indian cheetah.

The word ‘cheetah’ is derived from the Sanskrit chitraka, which means ‘spotted’. The earliest visual evidence of the Asiatic cheetah, dating back to 2500 to 2300 BCE, is found in cave paintings in Kharvai and Khairabad, and in the upper Chambal valley, in Madhya Pradesh. In 1935, a supplement published by the Journal of Bombay Natural History Society gave an indication of the cheetah’s erstwhile range: it roamed from Bengal to the United Provinces, Punjab and Rajputana, Central India to the Deccan.

“Outside India, the range of the Cheetah is said to extend northwards to Russian Turkestan and Trans-Caspia. In South-Western Asia its range is believed to reach from the frontiers of Sind through parts of Afghanistan, Baluchistan and Persia and Mesopotamia to Syria and Palestine,” it added. It also regretfully accepted that “in India the Cheetah is all but extinct in the wild state.”

Unlike the popular visual depiction of African cheetahs speeding across vast open grassland plains, in India, the cheetah’s habitat was diverse: scrubs, bushlands, arid and semi-arid open lands. As the cat was pushed back further, the last cheetahs found refuge in a niche habitat around the edges of sal forests in east-central India — until one day, their tracks faded away forever from the country.

Today, the animal is perilously close to being wiped out from Asia itself. The world’s last Asiatic cheetahs — barely numbering 50 individuals according to latest estimates — roam the cold, stony deserts and arid habitats of central Iran. And even in Africa, where the last few thousands of their cousins are to be found, their numbers are under immense threat.

Since the early 1970s, there were talks between Indian officials and their Iranian counterparts towards bringing the cat back to India. Iran, in return, wanted India to provide it with two big cats that it had lost in the past century — the tiger and the Asiatic lion. However, despite preliminary negotiations, the project never took off primarily because cheetah numbers in Iran were critically low and the animals were dispersed over thousands of square miles of rugged hinterlands with none in captivity. In recent years, India once again showed interest in reviving the project, and looked towards Africa. It was suggested that since the genetic difference between Asiatic and African cheetahs was not very large, the African species could be brought here. Cheetahs could become a flagship species for the revival of India’s critically imperilled grasslands, savannah and arid lands, often dismissed as ‘wastelands’ by policy makers. Currently, the project, proposed to be spearheaded by the National Tiger Conservation Authority, awaits a green signal from the Supreme Court. And so, India’s tryst with the only large cat species it ever lost might not be completely over just yet.