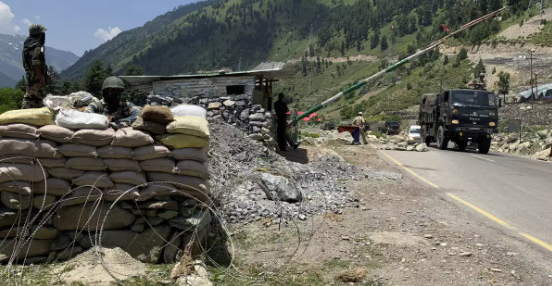 As LAC becomes the new LoC

The New Year has got off to a bumpy start as far as the already tense and uneasy India-China relationship is concerned. Even as troops from both sides are in proximate and prickly contact in the Ladakh region since the middle of 2020, January 2021 has been punctuated by a series of developments that pose a complex set of challenges to the two Asian giants.

The ninth round of talks between the military commanders from both sides, held on January 24, has remained inconclusive. But the silver lining is that even if there was no breakthrough, there has been no breakdown as regards the dialogue process.

This is even more relevant given that there were reports of skirmishes in the Sikkim region on January 20. Earlier in the month, media reports referred to the Chinese having constructed a new village a few kilometers across the Line of Actual Control (LAC) over the last year, thereby altering the demographic patterns in transgression of protocols agreed to in 2005.

To aggravate the territoriality issue further, China asserted, on January 21, that its construction of a village near LAC in the eastern sector was “beyond reproach” because Beijing had “never recognized” Arunachal Pradesh. In summary, the contested territoriality issue is now no longer confined to Ladakh in the western sector, but has moved eastwards with areas in Sikkim and Arunachal Pradesh being brought into simmer mode.

Reviewing the troubled bilateral relationship in a holistic manner, one could argue that India’s approach since Galwan seeks to convey a message of political resolve — that the Narendra Modi government will not be the first to blink — with a visible signal that restraint is still at play. The fact that the Indian military could wrest a minor but significant tactical advantage in the Ladakh region after being initially “surprised” has given Delhi that additional leverage, which has enhanced its resolve to stay firm and seek a return to the pre-Galwan status quo position.

Two signals from Delhi merit scrutiny. The Republic Day gallantry awards included a Mahavir Chakra (the second-highest award) to Colonel Santosh Babu, the commanding officer of the Bihar regiment who, along with 20 other soldiers, was killed by People’s Liberation Army (PLA) troops in the Galwan scuffle. The citation for Babu notes that “his column faced stiff resistance from the adversary who attacked using lethal and sharp weapons along with heavy stone pelting from adjoining heights” and avoids any reference to China or PLA by name. In other places, the choice of word is ”enemy”. One can conjecture that this is a case of Delhi signaling an olive branch in an elliptical manner.

Lest the Modi government be accused of appeasement in not naming the adversary/enemy, external affairs minister (EAM) S Jaishankar’s remarks, on January 28, at a thinktank event, are instructive. Reviewing the entire trajectory of the India-China ties from Delhi’s perspective, EAM reiterated what he has said in the past — namely that Galwan has profoundly disturbed the relationship and that in relation to LAC “any attempt to unilaterally change the status quo is completely unacceptable”. He added, “Significantly, to date, we have yet to receive a credible explanation for the change in China’s stance or reasons for massing of troops in the border areas.”

China, which chose to tie a “knot” in a relationship that was relatively stable since 1993, has to decide on how it wants to frame the relationship with India — but for now, the tactical scenario is bleak. With LAC now becoming troubled in both west and east, from Ladakh to Arunachal Pradesh (the tri-junction with Bhutan having already been aggravated), the focus for the Indian military in monitoring PLA and deterring where required will be the higher priority. In short, LAC will acquire the sheen of the Line of Control (LoC) with Pakistan. And this will dilute the reserve strength and assets that India has maintained till now, when the annual operational tasking prioritized the western neighbor.

The severe constraints imposed by the pandemic will be unveiled soon, when the Union Budget is presented. Delhi’s challenge will be to provide adequate funds for the deployment of troops along LAC for an extended period. Long-term planning must go beyond urgent procurement of some inventory items and focus on enhancing India’s neglected trans-border military capabilities in an astute manner. Apart from air and naval power, India needs to invest in the new domain of new technologies that extend from cyberwarfare to artificial intelligence and spectrum domination in a selective manner. This plea has been made often but in vain.

Jaishankar’s speech is an important diplomatic punctuation in placing markers and identifying the preferred template for the bilateral relationship as being predicated on “the three mutual —mutual respect, mutual sensitivity and mutual interests”. The resonance with the Nehruvian era (Panchsheel) is palpable. And the abiding lesson is that diplomacy and political resolve, however refined, acquire appropriate efficacy only when backed by credible composite national capability, both economic and military. The Covid-19-scarred budget will play a role in framing India’s long-term China policy.