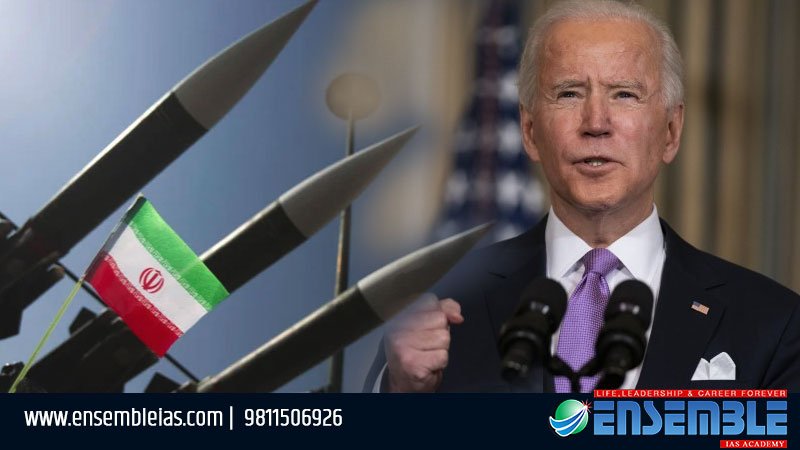 Iran nuclear deal : In July 2015, an agreement, Joint Comprehensive Plan of Action (JCPOA), better known as the Iran nuclear deal was concluded with Iran, China, France, Germany, Russia, the United Kingdom, the United States and the European Union. According to the Agreement it was decided that Iran’s nuclear activities would be limited in exchange for reduced sanctions. The President of the United States was given the responsibility to monitor and having satisfied certify that Iran was adhering to the terms of the agreement.

This JCPOA was not a treaty or an executive agreement and was not a signed document. It had no formal provisions for withdrawal, but if a member of the deal could stop complying with its obligations. The JCPOA reflected political commitments between Iran, the P5+1 (the United States, the United Kingdom, France, Germany, Russia, China) and the EU. The JCPOA ended some of the sanctions on Iran while suspending others, subject to waivers. These included waivers of oil sanctions implemented in January 2012, which required periodic re-certification.

But in May 8, 2018 US unilaterally quit the deal. The reason cited by Trump was that the U.S. would withdraw from the deal on a controversial ground that Iran was not complying with the JCPOA and reveal all of its research into nuclear weapons.

Why it has come into News again?

U.S. President Joe Biden’s attempts to revive JCPOA. The Biden administration says it will return to the deal if Iran starts complying with its terms. Tehran, on the other side, asks the U.S., to return to the agreement first and lift sanctions on Iran.

The EU’s efforts to organise direct U.S.-Iran talks were also unsuccessful as Tehran reportedly rejected the offer. Since the deal had taken place it is seen that Iran has accelerated its nuclear programme. This game of chicken continues as the clock is ticking. In Iran the Presidential Election is round the corner. Iran will elect a new President in June. President Hassan Rouhani, wants US back in the deal. But the other group believe that opposition, if they come to power, may not want US back in the deal.

There is no guarantee that a moderate like Mr. Rouhani would be elected this time. And it is not a secret that there is considerable opposition among the hardliners, a powerful constituency, towards any kind of engagement with the U.S. This is the reason that the US President Mr. Biden’s want to get the nuclear agreement back on track before Mr. Rouhani leaves office.

Action taken by US

To be sure, Mr. Biden has moved with a sense of urgency after assuming power. He appointed a special envoy for Iran, showed signs of rebalancing ties with Saudi Arabia, and sent clear signals to Tehran about America’s desire to get back to the deal. But these actions do not seem to be enough to rebuild the trust after the acrimonious Trump years.

Iran is not happy with other countries approach towards it. Some of Iran’s concerns are genuine.

Both sides need the deal — the U.S. wants to scuttle Iran’s nuclear programme and Iran wants relief from sanctions. They should stick to the diplomatic path for a breakthrough.

published in The Hindu on 03/03/2021. In this article Iran Nuclear Deal between Iran and US has been discussed.