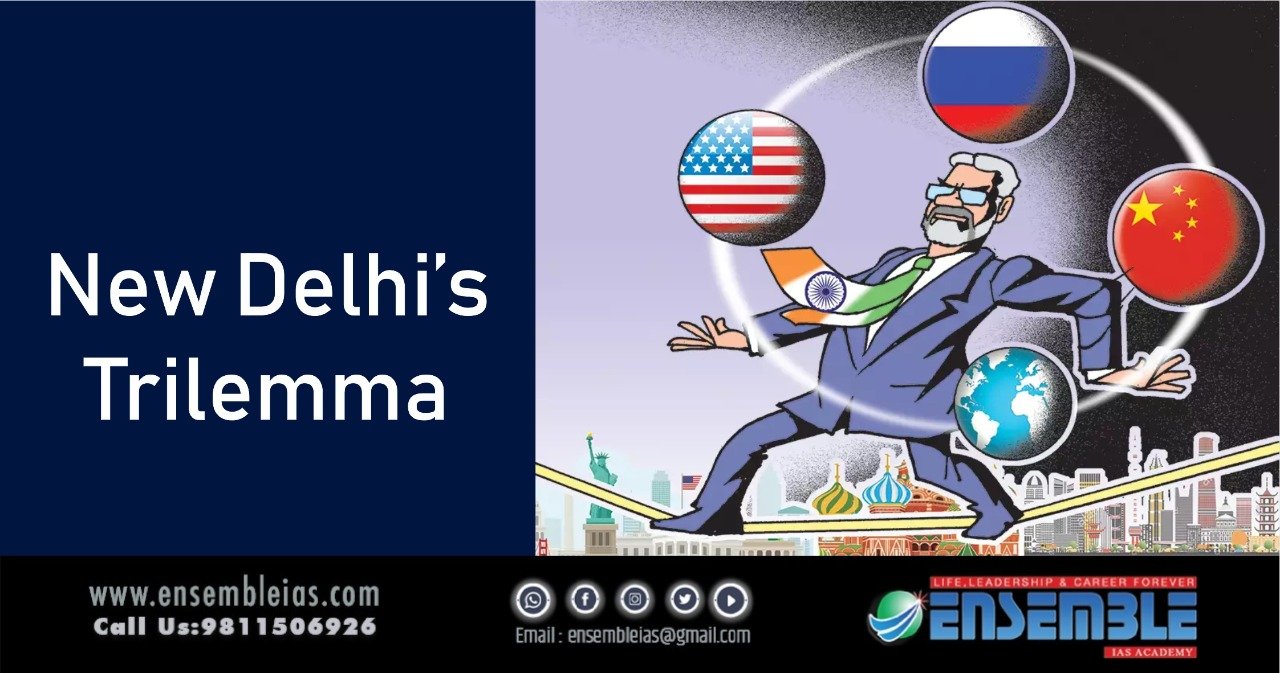 New Delhi’s trilemma: How India manages its interests in the US-China-Russia game will be one of its toughest challenges

New Delhi’s trilemma: How India manages its interests in the US-China-Russia game will be one of its toughest challenges: The first summit between Joe Biden and Vladimir Putin provided a context for what is and will be one of India’s toughest foreign policy challenges. Here’s why. First, US-Russia relations are, at best, bad. Second, Russia is getting close to China, in response to West’s pushback for Moscow’s military ‘muscle flexing’ in Europe. Third, with the West anointing China as the geopolitical rival, the relationship between Washington and Beijing-Moscow may considerably worsen. That presents to India the challenge of managing its interests in a complex US-China-Russia game. A foreign policy trilemma, as it were.

India is potentially a significant ally of the West in any move to contain China. The Quad is a good, if still-evolving, example of this. But it is also doubtful India can fully depend on the US in the event of any serious hostility with China. Therefore, unlike traditional US allies India will need to develop a sharp China policy itself. The Galwan clash showed India is capable of this, despite the huge power asymmetry between the two countries.

In this context, arms and defence knowhow from Russia are very useful for India. But Moscow has not been thrilled with what it sees as New Delhi’s increasing strategic ties with Washington. The Russian leadership hasn’t minced words criticising the Quad and is even reportedly looking to expand the scope of its defence ties with Pakistan. If America-led West and Beijing-Moscow become two clear geostrategic poles, India’s space for manoeuvre may shrink, and China won’t at all mind exploiting that.

There are other worries in this trilemma. India-US economic relations won’t be on a solid footing till there is a trade pact, on which there is little movement. Plus, there’s the impact of America’s military withdrawal from Afghanistan. Will New Delhi need Moscow if Af-Pak hots up?

Also Read: With rampant and illegal sand mining, the Yamuna can’t be rejuvenated

India’s best case scenario is that America and Russia feel better about each other, so that Moscow has less reason to court Beijing. Indeed, for Washington, too, a Beijing-Moscow combo is something to be avoided. It makes sense for America to keep its strategic focus squarely on China. Russia isn’t strong enough to be a global disruptor, China is. But India may not get what it wants – US-Russia and US-China jousting may sharpen the trilemma for it. The best, maybe the only, way out is to seriously expand India’s economy. If India can grow at 8% annually over the next 10 years, the trilemma will wither away.