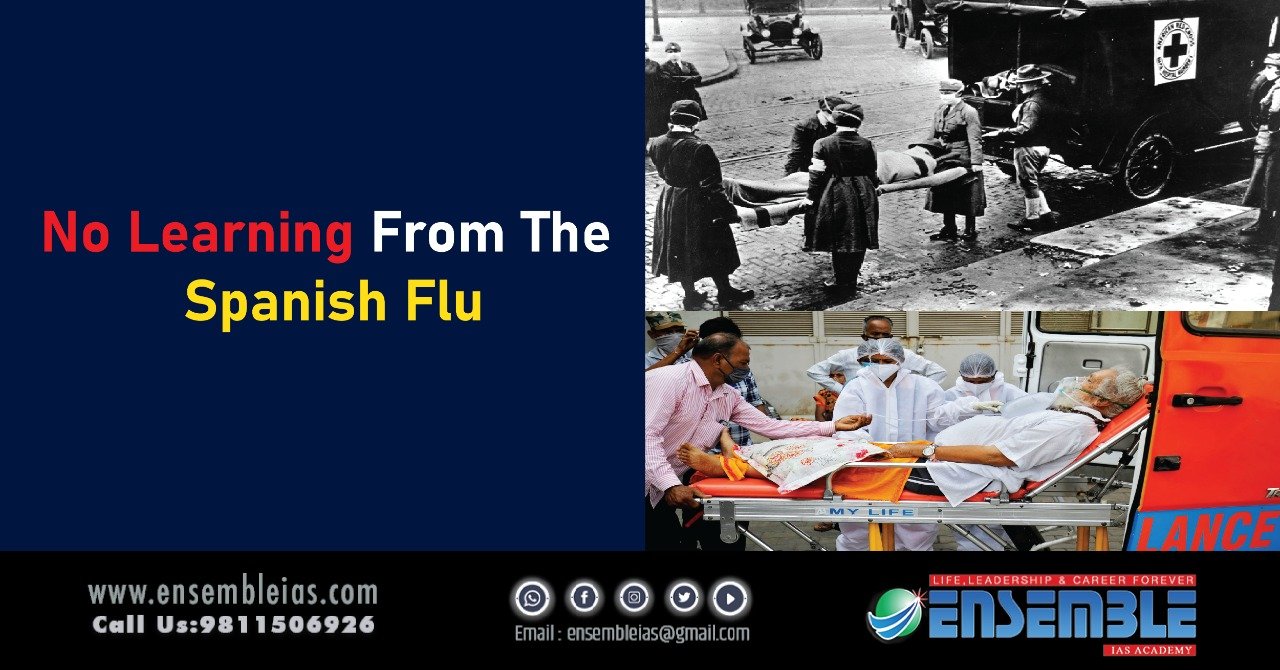 No learning from the Spanish flu: In the beginning of COVID-19 last year, thousands of people around the world shared an image on social media depicting the three waves of the 1918 influenza pandemic, commonly known as the Spanish flu. The image had the headline, ‘Humanity should never allow a repeat of the same mistake made in 1918, in the time of COVID-19’. The image read, “The most severe pandemic in history was the Spanish Flu of 1918. It lasted for 2 years, in 3 waves, with 500 million people infected and 50 million deaths. Most of the fatalities happened in the 2nd wave. The people felt so bad about the quarantine and social distancing measures that when they were first lifted, the people rejoiced in the streets with abandon. In the coming weeks, the 2nd wave occurred, with tens of millions dead.”

This post contained a mix of accurate and inaccurate information. The estimates are accurate and the second wave was indeed the most deadly. However, according to James Harris, a historian at Ohio State University, part of the reason why the flu spread like wildfire causing a second wave was because officials were unwilling to impose restrictions during wartime despite the existence of a new mutated strain.

No learning from the Spanish flu:

Lessons from the past

In most countries, people got tired of lockdowns, wearing masks, staying at home and not socialising last year. Human beings are social animals after all. Social ostracisation has been shown to cause pain in the brain similar to putting up with physical pain. So, as the number of cases began to fall by the end of the first COVID-19 wave, governments and people around the world started to let their guard down. Amongst many businesses that were allowed to resume, for example, restaurants which were suspected to be one of the major centres for the spread of COVID-19 were given permission to open. Signs outside their establishments read ‘No entry without mask’, but once inside, visitors could remove their masks even while not eating. They talked, laughed, sneezed and coughed in indoor non-ventilated spaces. These visitors would have known about the dangers of this behaviour, some of them may have read about the Spanish flu. But awareness and action often lie at opposing ends.

Each one of us has to contribute to break the chain of COVID-19 infections. However, the ultimate responsibility of managing the pandemic cannot lie with the masses in today’s modern societies; it is the job of governments. But governments of most countries failed to learn from the Spanish flu because they failed to understand and predict human behaviour. In India, the government allowed election rallies and religious gatherings. It hesitated in imposing a lockdown despite the emergence of new strains of the virus. Leaders were often seen addressing crowds and conducting meetings without masks. Every politician wants to win over people and give them what they want (in this case, freedom from lockdowns). But declaring victory prematurely gave rise to policies that caused the second wave.

Also Read: Cyclone Tauktae not to affect Mumbai as severely as feared: IMD

India had the opportunity to learn from the mistakes of other countries which opened up too soon after the first wave. But it didn’t. This has led to the huge spike in COVID-19 cases and deaths. Perhaps it was overconfidence in the government’s ability to manage the pandemic or an underestimation of the ability of COVID-19 to cause infections and deaths in the second wave or both that led to the surge in infections. While vaccines weren’t available during the Spanish flu, we have the benefit of curbing COVID-19 by vaccinating people now.

(No learning from the Spanish flu)