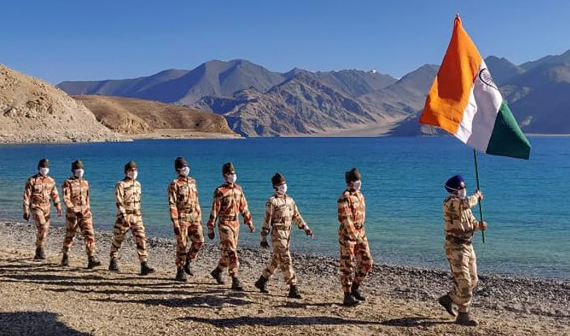 The mutual pulling back of tanks and infantry combat vehicles from heights on the southern bank of Pangong Tso a fortnight after military commanders of the two armies agreed on January 24 to push for early disengagement has raised hopes of a solution to the 10-month military standoff.

The mutual pulling back of tanks and infantry combat vehicles from heights on the southern bank of Pangong Tso a fortnight after military commanders of the two armies agreed on January 24 to push for early disengagement has raised hopes of a solution to the 10-month military standoff.

This is the first significant movement in negotiations to ease tensions in at least eight months — disengagement in Galwan valley took place in early July 2020 but it did not progress in other areas.

According to officials and experts monitoring the border row, India will keep a wary eye on the developments taking place in the area as the process unfolds.

Regaining access to several areas that are now difficult to reach due to actions by the Chinese army along LAC is critical, experts said.

“On the face of it, the disengagement is a positive step. I think we will have to wait for details of the process, whether it includes all military presence or only heavy equipment and aspects such as future patrolling pattern in vacated areas. It is hoped that this is a part of a more comprehensive agreement covering all areas in Ladakh,” said former Northern Army commander Lieutenant General DS Hooda (retd).

PLA’s deployments in forward areas in Depsang have hindered access of Indian soldiers to routes including the ones leading to Patrolling Points (PP) 10, 11, 11-A, 12 and 13. Also, before PLA grabbed positions on Finger 4, the Indian Army would patrol right up to Finger 8, which New Delhi considers within Indian territory.

The Indian claim line in this sector extends to Finger 8, while the Chinese claim is up to Finger 4. The two are about 8km apart.

China on Wednesday said that frontline troops of the Chinese and Indian armed forces have begun to disengage at the southern and northern banks of Pangong lake in line with the consensus reached at the 9th round of corps commander-level talks on January 24. No withdrawal of troops has taken place in the Finger Area on the northern bank, said one of the people cited above.

India has pushed for comprehensive disengagement at all flashpoints and restoration of status quo ante of early April 2020 during the ongoing military talks with China.

“The 10th round of military talks is expected to be held soon. Aspects related to disengagement will be discussed during the dialogue. Verification will be a critical aspect of the disengagement process, which is likely to take place sector-wise and in phases,” said an Indian official who asked not to be named.

Some experts warned that China could not be trusted, and India should be extremely cautious in dealing with the neighbor during the disengagement process.

“They (the Chinese) are masters in creating optical illusion. Their withdrawal from southern heights of Pangong Tso could be a decoy move. They must withdraw to a distance from where swift build up is not possible. De-escalation of the military build-up to a sufficient depth is more critical than disengagement,” said Lieutenant General BS Jaswal (retd), also a former Northern Army commander.

He said the Chinese forces must retreat to such a depth that doesn’t allow them to surprise the Indian Army and reoccupy strategic locations.

“On the one hand, PLA is trying to show that it is withdrawing from the heights on the southern bank. On the other, China is building villages on our borders. It‘s a ploy as those villages house soldiers. These areas will serve as logistics hubs to support future ingress and will minimize troop build-up signatures,” Jaswal added.

India has made all preparations to hold ground in Ladakh for an extended duration. On January 12, Army chief General Manoj Mukund Narayana said that the Indian Army was prepared to hold its ground in eastern Ladakh “for as long as it takes” to achieve national objectives in case the ongoing military and diplomatic talks with China are prolonged.

“Resolving the border row is a priority. But nothing will be done in a hurry,” said a second official on condition of anonymity.