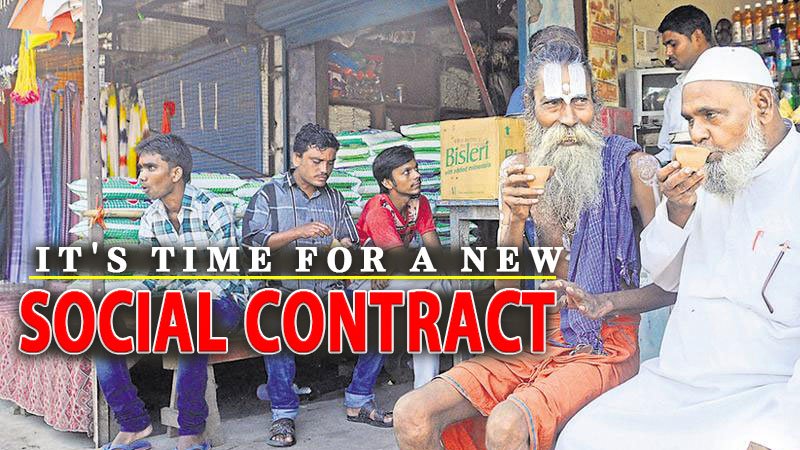 Social Contract : The gulf between Hindus and Muslims appears to have grown. A sustained conversation is needed.

Last month, the dispute in Ayodhya finally came to a conclusion following the unanimous verdict of the Supreme Court. The dispute, accompanied by a considerable measure of Hindu-Muslim acrimony, had been simmering locally in the Awadh region for nearly four centuries and had assumed a pan-Indian dimension since the Ramshilan pujas of 1988.

It affected the politics of the country, caused innumerable deaths, led to sharp polarisation along communal lines and even changed governments. Its overall impact was awesome and arguably one of the most profound in independent India.

Yet, when the resolution of the dispute was announced by the Supreme Court, the reactions were very muted. There were no joyous celebrations in the ranks of those who had made the construction of a grand Ram temple in Ayodhya their life’s foremost mission. Nor was there a mood of absolute dejection among those who felt terribly let down. The restraint may have been occasioned by the decision of the Narendra Modi government and the Bharatiya Janata Party (BJP), not to mention the Rashtriya Swayamsevak Sangh, to downplay its achievement. Perhaps the real celebrations will take place the day the mandir is finally built and opened for worship.

There was some heartburn in the ranks of the secular intelligentsia that had resolutely opposed the Ayodhya movement and done its utmost to impede the movement politically and in the courts. However, apart from the decision of a section of the Muslim community to file a review petition — which can, at best, delay the inevitable — the proclamation of a funeral service for Indian secularism evoked very little response. People digested the verdict, expressed their happiness or scepticism in private, and then moved on with their lives. So placid was the response that a casual observer would, indeed, have been mystified that this was the dispute that had turned India upside down.

Maybe the reactions — both celebratory and angry — have merely been bottled up and need a small trigger to explode. However, if the muted public reaction stands the test of time, it would suggest that the end of the Ayodhya dispute could be the signal for moving beyond the communal-secular schism.

The tendency in India very often is to let things quietly evolve in the hope that society — like the market in economic thinking — will somehow manage to achieve a prudent balance. Society, however, does not operate in a vacuum. Despite its understated nature and away from the glare of shrieking TV channels, there are silent interventions that will shape the course of the future.

First, it is quite clear that the Supreme Court verdict has met the demand for the construction of a Ram temple on the site of a pre-existing temple. In the context of the gradual evolution of a distinctive “Hindu” vote bank beginning from the election of 1991 and culminating in the absolute majority for the BJP in 2014 and 2019, the Ayodhya verdict could be — and has been — interpreted as a triumph of Hindu nationhood. The process may well get another fillip if the Citizenship (Amendment) Bill is passed in Parliament.

There have been some regressive facets of this shifting nature of the Indian “self” in the political domain. The most striking of this is the unfortunate incidents of lynchings over beef and the intolerance of intercommunity marriages. These have bred a sense of insecurity among the Muslim minority.

Second, while the Muslim community has, by and large, accepted the Ayodhya verdict with equanimity, there is concern over lynchings and the erosion of Muslim representation in the political sphere. The more farsighted Muslim leadership has recognised that some of the Hindu reaction is a consequence of the impression that secularism was used as a fig leaf to impose a Muslim veto. In addition, the rise of Islamic terrorism all over the world has disoriented Muslim communities and resulted in the radicalisation of a small section of its youth.

The net consequence of all these developments is that a mood of nervous sullenness has overtaken the community. While there is now a discernible middle class in the Muslim community, its strategic influence in the community is still tenuous. Indian Muslims, as a whole, are still excessively influenced by a religious orthodoxy that remain suspicious of modernity. Along with ghettoisation, India’s Muslims seem insufficiently integrated into the mainstream. Religious distinctiveness has also resulted in social and political distinctiveness.

The gulf between the Hindus and Muslims has, it would seem, increased over the past few decades. Communal amity isn’t only measured in terms of sectarian clashes. There are other indicators that cannot be measured statistically, but emerge from anecdotal evidence and social perceptions.

This is unfortunate. While Indian development will always be stymied and distorted if the majority community is out of sync with the prevailing ethos of the governing elite, the same will be the case if the largest minority feels distanced from the aspirations of the majority.

The problem cannot be resolved overnight or with electoral verdicts. What is needed is a sustained conversation at different levels of society between members of the two communities, regardless of whether or not they flaunt their religious identity as being paramount.