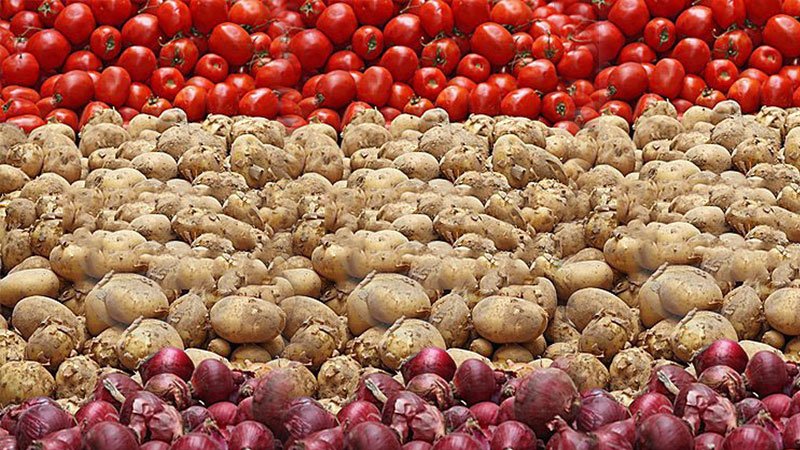 Tomatoes-onions-potatoes (TOP) are the three basic vegetables that face extreme price volatility and the government often finds itself on the edge in fulfilling its dual objectives of ensuring remunerative prices for farmers and affordable prices for consumers. Tomatoes-onions-potatoes (TOP) are the three basic vegetables that face extreme price volatility and the government often finds itself on the edge in fulfilling its dual objectives of ensuring remunerative prices for farmers and affordable prices for consumers.

Last month, on September 13, when onion retail prices crossed Rs 40/kg in Delhi, the government was hyperactive and imposed a minimum export price (MEP) of $850/tonne. Later on, as prices went further up to Rs 50-60/kg, stocking limits were imposed on traders and exports of onions were banned. It created problems in neighbouring countries, especially Bangladesh, inviting a sharp jibe from the visiting Prime Minister Sheikh Hasina on how this ban, without any notice, affected her cooking and how she had to instruct her cook to prepare all vegetables without Indian onions.

But, now, when tomato retail prices have gone beyond Rs 50/kg across the country, what will the government do? Will PM Hasina have to cut down even Indian tomatoes from her cooking, and be forced to turn to China? Anytime, the same situation may arise in the case of potatoes. Such knee jerk reactions like export bans or stocking limits on traders only show the hollowness of our policies. We can certainly do better in addressing large price volatility of basic vegetables.

Tomatoes-onions-potatoes (TOP) are the three basic vegetables that face extreme price volatility and the government often finds itself on the edge in fulfilling its dual objectives of ensuring remunerative prices for farmers and affordable prices for consumers. Figure-1 presents the wholesale price index of TOP since 2012. With a coefficient of variation (CV) of 52 per cent, onion is the most volatile, followed by tomato (47 per cent) and potato (31 per cent). Potato is the least volatile because of higher processing-to-production share (7 per cent) than onions (3 per cent) and tomatoes (1 per cent), and also because of large storage facilities for potatoes. In fact, of the total 8,000 plus cold storages in India, 90 per cent are used for storing potatoes. But tomatoes can’t be stored for long. The current spike in tomato prices is due to lower supply from major tomato producing states like Maharashtra and Karnataka owing to heavy rains.

The government had announced “Operation Green-TOP” with an allocation of Rs 500 crore in its budget of 2018. The idea was to build value chains of TOP on the lines of “Operation Flood” (AMUL model) for milk in such a way that will ensure a higher share of consumer’s rupee goes to farmers and stabilises their prices. The scheme is nested with the Ministry of Food Processing. But, so far, progress is tardy. The AMUL model is based on large procurement of milk from farmers’ cooperatives, processing, storing of excess milk in skimmed milk powder form during the flush season and using it during the lean season, and distributing milk through an organised retail network. Milk does not pass through any APMC, involves no commissions, and farmers normally get 75-80 per cent of the consumer’s rupee, as per AMUL’s claims.

But TOP are mostly traded in APMC markets, with layers of mandi fees and commissions, and farmers get less than one-third of the consumer’s rupee. In a forthcoming ICRIER-NABARD study on “Deconstructing Value Chains of Tomatoes, Onions and Potatoes”, we estimate the farmer’s share to be 32.1 per cent, 29.1 per cent and 26.6 per cent of a consumer’s rupee for TOP respectively. This cries for massive reforms in APMC.

For stabilising retail prices of fresh TOP, and ensuring a higher share of the consumer’s rupee to farmers, policy makers need to focus on three things. First, ample storage for buffer stocks has to be created. While potatoes and onions can be stored, repeated stocking limits on onion traders discourages private investments in modern cold storages. For inviting large private investment in storages, the Essential Commodities Act has to go. If the government feels that traders are colluding to rig the market, then the Competition Commission of India should look into it. The government banning exports or imposing stocking limits is not a solution.

Second, increase processing capacities for TOP. Since buffer stocking for tomatoes is not possible, processing remains the only solution. For this, the GST for tomato puree and juice should be reduced from 12 per cent to 5 per cent. Milk and most milk products attract 0 to 5 per cent GST. To propagate the use of processed products (tomato puree, onion flakes, powder) among urban and bulk consumers (hospitals, schools, armed forces), the government should run campaigns in association with industry organisations, as was done for eggs. Most of the advanced countries use large quantities of processed tomatoes and onions, which can be stored conveniently. India needs to have time bound targets to process and export at least 10-15 per cent of TOP production. While India exports 10-12 per cent of onion production in fresh and dehydrated form, it exports less than 1 per cent of tomatoes and potatoes production (see Figure-2). 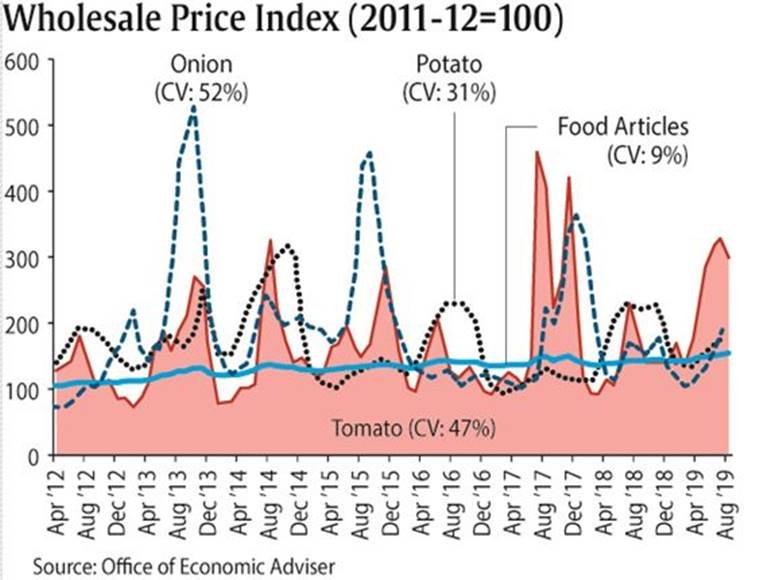 Third, direct buying by organised retailers from farmer producer organisations (FPOs) through contract farming, bypassing the mandi system, should be encouraged. Like dairy cooperatives, TOP cooperatives and retail outlets like Safal across the country should be opened. With over 400 Safal outlets across Delhi-NCR, onions are being sold at Rs 25/Kg when retail prices are hovering between Rs 50-60/Kg. A similar thing could have been done for tomatoes. However, this will require value chain development starting with market reforms along with overhauling the infrastructure of existing APMC mandis in the country. With crumbling infrastructure, many APMC mandis are running over their capacity. Our visit to the Kolar mandi, one of the largest tomato mandi in the country, spread over 20 acres, revealed that the operations of the mandi have spread to adjoining areas. For better functioning, it requires at least two to three times more land and much better infrastructure. These reforms and investments can be undertaken on a public-private partnership (PPP) basis, commissions can be reduced, contract farming can be encouraged, along with setting up of private mandis for better efficiency.

The government needs to find a sustainable solution for price stabilisation of TOP, rather than taking temporary ad hoc measures. It is time to TOP up.