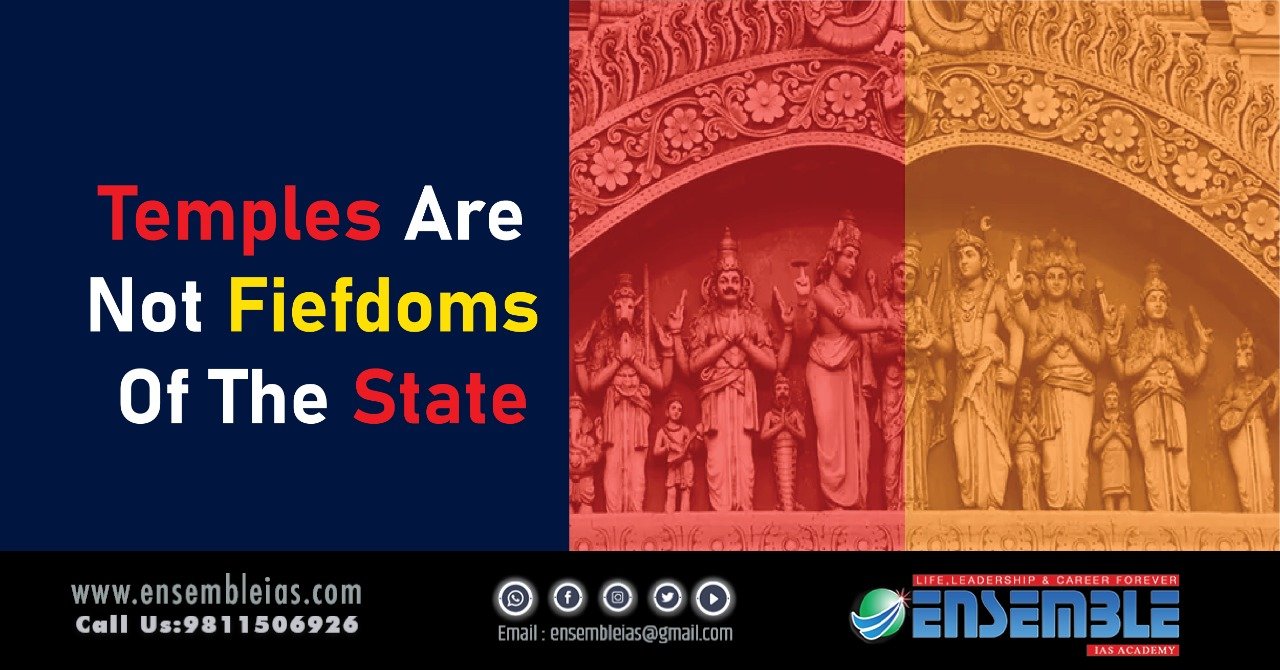 Temples are not fiefdoms of the state: In the article, The last word on the state and temples,  in the absence of any answer as to whom temples would be entrusted to — if the government were to cede its control — the writer enters the realm of imagination and divines an answer — “powerful private interests”. No doubt the problem of hierarchical division in Hindu society is prevalent. But the issue of government control of temples is distinct from the issue of throwing open Hindu religious institutions to all classes and sections of society. To confuse the two is constitutionally misleading. Separate pieces of legislation exist — the [Madras] Temple Entry Authorisation Act, 1947 — to address these issues.3

Read More: Vaccine Maitri is a pragmatic response to the pandemic

A myth is trotted out to justify sovereign control of temples: that Hindu temples were supervised and managed by kings, who “habitually employed ministries to supervise temples and charitable bodies”. Like many myths the colonials perpetuated, this too must be disabused: there is not a shred of historical source to support this claim. On the contrary there are inscriptions, cast in stone, that attest that temples were managed wholly and entirely by local communities.

Why is the community demanding that the government stay away from temples? Unbridled corruption; theft and destruction.

If the gross mismanagement of financial resources and indisputable corruption by the state along with the loss and destruction of temple antiquities were not sufficient reasons for the government to relinquish its (mis)management, a mere glance at state legislations will reveal a deeper malady. The state has assumed the role of religious functionaries to determine who will be heads of Mutts and the authority to conduct poojas. For example, The Shri Jagannath Temple Act, 1954 entrusted the committee appointed by the state with the task of ensuring the performance of seva pooja. When the Act was questioned by the Raja of Puri before the Supreme Court, in Raja Birakishore vs The State Of Orissa, the Court made a revelation: the performance of a puja is in fact a secular act and, therefore, the state is justified in its regulation.

Temples are not fiefdoms of the state:

The exercise of state regulation of secular aspects of religion was taken to extreme lengths when the Court ruled that the state, by appointing temple priests, was exercising a secular function (Seshammal & Ors, Etc. Etc vs State Of Tamil Nadu). Whatever style of secularism we subscribe to, surely the Indian state is not to tell the believer how he/she is to offer worship to the deity nor is it to tell the custodian of the deity how she will be appointed.

The writer of the article rightly points out that the Constituent Assembly framed the religious liberty clauses keeping in mind the historical prohibition of entry to certain classes and sections of Hindu society. Article 25(2) grants power to the State to enact law on two distinct aspects. Article 25(2)(a) empowers the state to regulate “economic, financial, political or other secular activities which may be associated with religious practice”. Article 25(2)(b) enables the state to enact law to prohibit the exclusion of ‘classes and sections’ of Hindu society to enter into Hindu temples of a public character and also make law for social welfare and reform. Thus, the control of secular aspects associated with religion and the power to throw open Hindu temples to all classes and sections of society are distinct. The control of secular aspects is not a measure of any social reform. Viewed from this standpoint, the Hindu Religious and Charitable Endowments Department is not a “tribune for social justice” as argued in the article nor has it ever guaranteed equal access to worship.

The history of legislative practice of endowment laws reveals the state prerogative in ensuring regulation of only secular activities. As a matter of fact, the Shirur Mutt case, while upholding certain provisions of the 1951 Act, struck down a major portion of the Act characterising the provisions as a “disastrous invasion” of religious liberty. In 1959, the Legislature ‘cured’ the defects pointed out by the Supreme Court, by inserting verbatim the very provisions that the Supreme Court had stuck down in 1954.

The Waqf Act justification for the legitimacy of control of Hindu religious endowments is misleading. A reading of the Act reveals that it applies to charities and specifically excludes places of worship such as mosques. In fact the scheme of the Waqf Act supports the argument that the government should not regulate places of worship.

The most fundamental criticism against the release of Hindu temples from government control to the society is two-fold. First, it is asked to whom will the temples be handed over to? Second, once restored to the community, will it not perpetuate class hierarchies? What is being asserted by the community is the right of representation in the affairs of the management of temples. This right of representation can be effectuated by the creation of boards representative of religious heads, priests and responsible members from the dharmik sampradaya. The logic is simple. Members who profess a particular dharmik sampradaya will have its due interest in mind.

When the British government realised that a secular government should take no part in the management of religious institutions, it enacted the Religious Endowments Act (Act XX of 1863) repealing the pre-existing Bengal and Madras Regulations. Interestingly, in handing over the religious institutions to the society, it created committees in every district to exercise control over temples. Section 8 of the Act provided that the members of the committee to be appointed from persons professing the religion, for purposes of which the religious establishment was founded or maintained and in accordance with the general wishes of those who are interested in the maintenance of the institution. For this purpose the local government caused an election. In the spirit of equality of all religions, this scheme should be applicable to all religious institutions which would guarantee adequate community representation in the management of their places of worship.