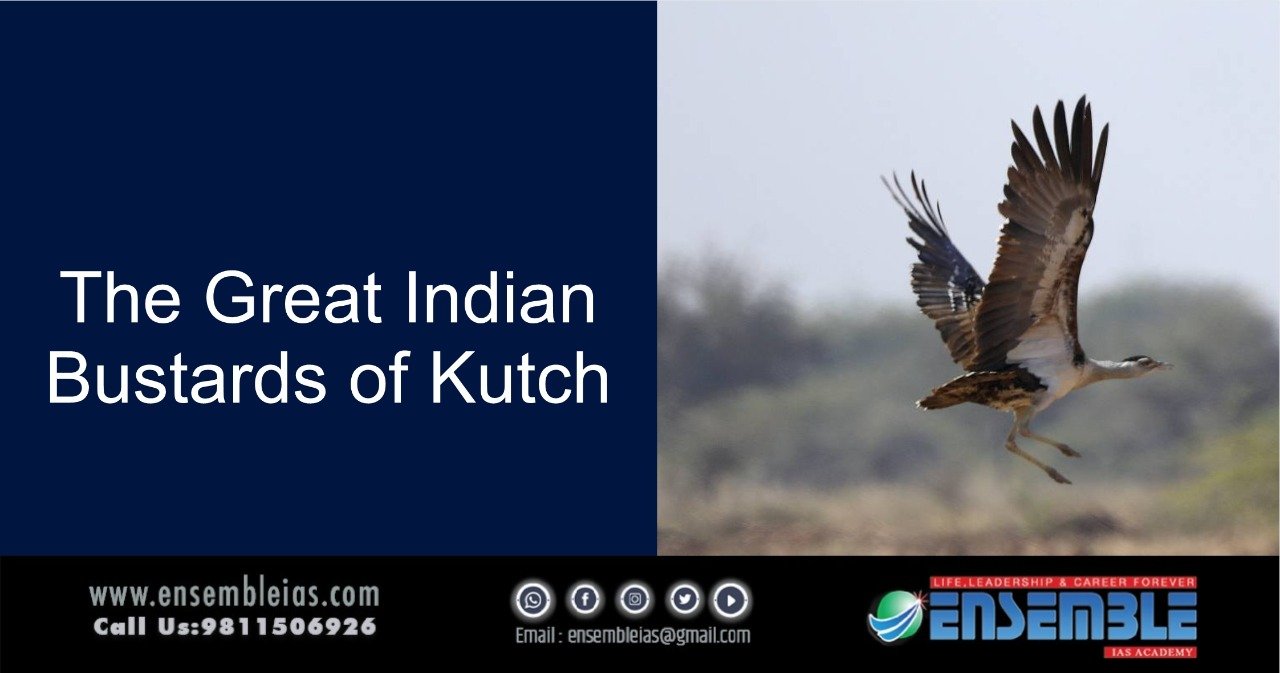 The Great Indian Bustards of Kutch: their habitats, existential threat

The government has said there are no Great Indian Bustards in Kutch Bustard Sanctuary in Gujarat, a claim that has raised eyebrows among conservationists and wildlife enthusiasts.

On Monday, the Central government informed the Rajya Sabha that there were no Great Indian Bustards (GIB) in Kutch Bustard Sanctuary (KBS) in Gujarat’s Kutch district as on January 1 this year. The reply, which came in response to a question asked by Congress MP Shaktisinh Gohil, raised many eyebrows among conservationists and wildlife enthusiasts as it had come just three months after the Supreme Court order to power companies to place their overhead powerlines underground in GIB habitat in Rajasthan and and Kutch to save the species from going extinct.

Great Indian Bustards and their habitats

GIBs are the largest among the four bustard species found in India, the other three being MacQueen’s bustard, lesser florican and the Bengal florican. GIBs’ historic range included much of the Indian sub-continent but it has now shrunken to just 10 per cent of it. Among the heaviest birds with flight, GIBs prefer grasslands as their habitats. Being terrestrial birds, they spend most of their time on the ground with occasional flights to go from one part of their habitat to the other. They feed on insects, lizards, grass seeds etc. GIBs are considered the flagship bird species of grassland and hence barometers of the health of grassland ecosystems.

On the brink of extinction

In February last year, the Central government had told the 13th Conference of Parties to the United Nations Convention on Migratory Species of Wild Animals (CMS) held in Gandhinagar, that the GIB population in India had fallen to just 150. Of them 128 birds were in Rajasthan, 10 in Kutch district of Gujarat and a few in Maharashtra, Karnataka and Andhra Pradesh. Pakistan is also believed to host a few GIBs. The historical range of these majestic birds included much of Indian sub-continent but it has now shrunk by 90 per cent, experts say. Due to the species’ smaller population size, the International Union for Conservation of Nature (IUCN) has categorised GIBs as critically endangered, thus on the brink of extinction from the wild.

Scientists of Wildlife Institute of India (WII) have been pointing out overhead power transmission lines as the biggest threat to the GIBs. WII research has concluded that in Rajasthan, 18 GIBs die every year after colliding with overhead powerlines as the birds, due to their poor frontal vision, can’t detect powerlines in time and their weight make in-flight quick manoeuvres difficult. Coincidentally, Kutch and Thar desert are the places which have witnessed creation of huge renewable energy infrastructure over the past two decades, leading to installation of windmills and construction of power lines even in core GIB areas. For example, windmills whirr on the north, south and western border of the 202-hectare KBS while two power transmission lines run on its eastern border. KBS has also recorded deaths of two GIBs after hitting powerlines. Change in landscape by way of farmers cultivating their land, which otherwise used to remain fallow due to frequent droughts in Kutch, and cultivation of cotton and wheat instead of pulses and fodder are also cited as reasons for falling GIB numbers.

Why no bustard in KBS

KBS near Naliya in Kutch district’s Abdasa block is a tiny sanctuary notified in 1992 and spread over just two square kilometres (sqkm). But its eco-sensitive zone spread over 220 sqkm covers most of present-day core GIB habitat. The creation of safe-haven for the birds led to an increase in the GIB population in KBS—from 30 in 1999 to 45 in 2007. But windmills and powerlines started coming up right on the borders of the sanctuary from 2008 onward and GIB numbers started dwindling hence. The population fell to just 25 individuals by 2016 and field staff of KBS say, now there are only seven, all of them female. No male has been sighted for the past two years. Besides the KBS, Prajau, Bhanada and Kunathia-Bhachunda are important grasslands which have been declared unclassified forests recently. Due to the barrier created by the power infrastructure on all its sides, sightings of GIB inside the KBS’ notified two sqkm area is becoming increasingly rare.

In response to a petition filed by Ranjitsinh Jhala, the retired IAS officer known for his efforts for conserving wildlife in the country, the Supreme Court in April this year ordered that all overhead power transmission lines in core and potential GIB habitats in Rajasthan and Gujarat should be undergrounded. The SC also formed a three-member committee, including Devesh Gadhvi, the member of the bustard specialist group of IUCN, to help power companies comply with the order. But Gadhvi notes that nothing has happened on the ground.

Also Read:Centralisation not a Risk Worth Taking

In 2015, the Central government launched the GIB species recovery programme. Under the programme, the WII and Rajasthan forest department have jointly set up conservation breeding centres where GIB eggs harvested from the wild are incubated artificially and hatchlings raised in controlled environment. Till last year, nine eggs had hatched successfully and the plan is to create a population which can act as insurance against the threat of extinction and release the third generation of these captive-bred birds into the wild.