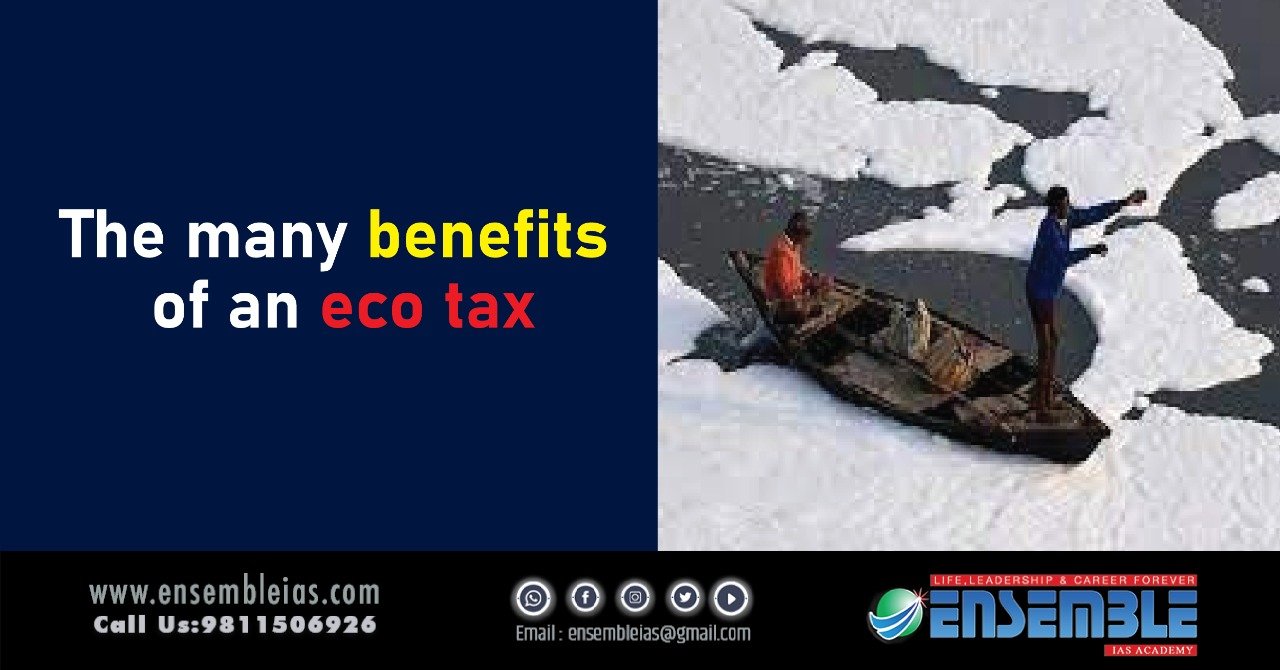 The many benefits of an eco tax: Environmental fiscal reforms will reduce pollution and generate resources for financing the health sector

The Indian government announced a pandemic-related stimulus package in FY 2020-21 though there was large decline in tax revenue. The fiscal deficit for FY 2020-21 (revised estimates) is projected to be 9.5% of the GDP; for 2021-22, it is pegged at 6.8%. The focus is on maintaining fiscal discipline. In this peculiar scenario, sustained health financing in India remains a challenge.

The World Health Organization (WHO) provides data on the percentage of the total population where the household expenditure on health was greater than 10% and 25% of the total household expenditure or income in India in 2011. This provides a clear picture of the status of spending on health by the rural and urban populations. As far as health expenditure above 10% is concerned, 17.33% of the population in India made out-of-pocket payments on health. The percentage was higher in rural areas compared to urban areas. Globally, the average was 12.67%, which means that 12.67% of the population spent more than 10% of their income (out of their pocket) on health. In Southeast Asia, 16% spent more than 10% of their household income on health. The Western Pacific region came second in the list of regions that saw a rate higher than the global average. Similarly, 3.9% of the population in India made more than 25% of out-of-pocket payments on health, with 4.34% in the rural areas.

The Economic Survey of India 2019-20 has outlined the fact that an increase in public spending from 1% to 2.5-3% of GDP, as envisaged in the National Health Policy of 2017, can decrease out-of-pocket expenditure from 65% to 30% of overall healthcare expenses. This is where the importance of alternate sources of health financing in India needs to be stressed. The COVID-19 pandemic has also forced countries all over the world to rethink climate change and the need for preservation of the environment. Fiscal reforms for managing the environment are important, and India has great potential for revenue generation in this aspect.

Environment regulation, in turn, may take several forms: command and control; economic planning/urban planning; environmental tax (eco tax)/subsidies; and cap and trade. India currently focuses majorly on the command-and-control approach in tackling pollution. The success of an eco tax in India would depend on its architecture, that is, how well it is planned and designed. It should be credible, transparent and predictable. Ideally, the eco tax rate ought to be equal to the marginal social cost arising from the negative externalities associated with the production, consumption or disposal of goods and services. This requires an evaluation of the damage to the environment based on scientific assessments. This would include the adverse impacts on the health of people, climate change, etc. The eco tax rate may, thus, be fixed commensurate to the marginal social cost so evaluated. The Madras School of Economics had already undertaken extensive studies in this regard.

In India, eco taxes can target three main areas: one, differential taxation on vehicles in the transport sector purely oriented towards fuel efficiency and GPS-based congestion charges; two, in the energy sector by taxing fuels which feed into energy generation; and three, waste generation and use of natural resources. Tax revenues can be generated through eco taxes. There is also a need to integrate environmental taxes in the Goods and Service Tax framework as highlighted by the Madras School of Economics in its studies.

Negligible impact on the GDP

Environmental regulations may have significant costs on the private sector in the form of slow productivity growth and high cost of compliance, resulting in the possible increase in the prices of goods and services. However, the European experience shows that most of the taxes also generate substantial revenue and there is no evidence on green taxes with sustainable development goals leading to a ‘no growth’ economy. Most countries’ experiences suggest negligible impact on the GDP, though such revenues have not necessarily been used for environmental considerations. Thus, the negligible impact on the GDP may be a temporary phenomenon.

Hence, this is the right time for India to adopt environmental fiscal reforms as they will reduce environmental pollution and also generate resources for financing the health sector.

The many benefits of an eco tax:

Eduardo Araral is Associate Professor at the Lee Kuan Yew School of Public Policy and Surjith Karthikeyan is an Indian Economic Service officer. Views are personal