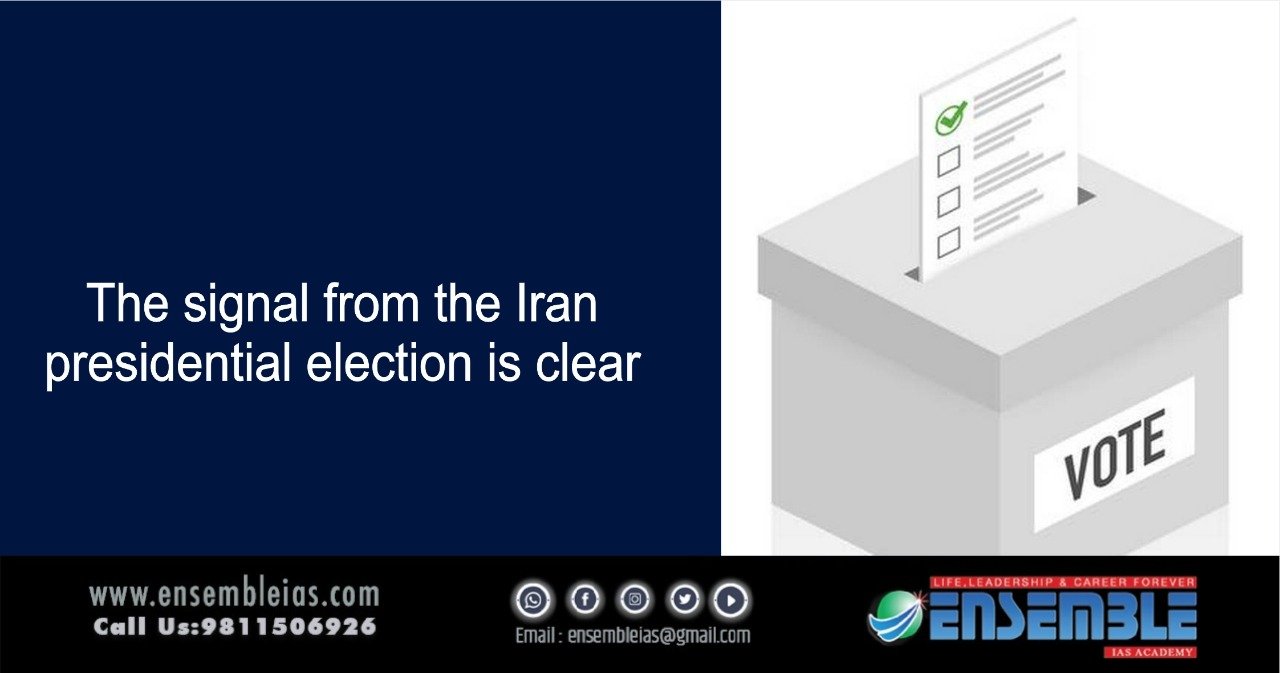 The signal from the Iran presidential election is clear

The signal from the Iran presidential election is clear: The non-transparent process of candidate selection has carefully rejected reformists and focused on hardliners

On May 25, the Guardian Council in Iran announced a slate of seven candidates who would compete in the presidential election on June 18. The council, in a non-transparent process, selected these seven candidates from among 592 applicants, including 40 women. The list does not include a woman candidate.

Iran has a dichotomous political order whose two parts are constantly at odds with each other. It has the institutions of a normal democratic system — a directly elected President, an elected national assembly, and a government responsible to the assembly. The other part of the political order is devoted to safeguarding the ideology and principles of the Islamic Revolution; this has provided the country with institutions that are unique to Iran and do much to dilute, if not undermine, the country’s democratic credentials.

Placed above the popularly elected President is the Supreme Leader, who wields supreme authority in all matters of national governance — security, defence, foreign relations, the judiciary. One of the bodies under the Supreme Leader is the 12-member Guardian Council.

The council has now carefully rejected reformist candidates and retained two who seem to be centrist, so that the slate has five so-called “hardliners”. But many of them are relatively light-weight: prominent personalities such as Assembly Speaker Ali Larijani, have also been excluded. Clearly, the Guardian Council has decided to ensure the election of one specific candidate, Ebrahim Raisi.

Raisi at the helm

Raisi has been a high-profile legal luminary in Iran since the days of the Revolution. He is now head of the judiciary and deputy chief of the Assembly of Experts which selects the Supreme Leader. Raisi had stood against Hassan Rouhani for the presidency in 2017, but was soundly defeated. Raisi has been in campaign mode for the last two years and has made “fighting corruption” and “caring for the down-trodden and the under-privileged” the centre-piece of his platform.

The list announced by the council has evoked sharp criticisms across the political spectrum. President Rouhani has expressed concern about the “minimal participation” in the elections that could now occur. Ali Larijani’s brother has called the list “indefensible”. Surprisingly, the Supreme Leader Ali Khamenei himself has said that in the vetting process “some candidates were wronged”, but,so far, the Guardian Council has not revised the candidates’ list (https://bit.ly/3cBIXR7).

Khamenei appears to have backed the narrow selection of candidates to ensure that Iran’s politics will now shift from Rouhani’s moderate reform to the hard ideological posture of Ebrahim Raisi, who is his long-term political associate. As Iran is now once again engaged in dialogue on the nuclear issue with the United States and other interlocutors in Vienna, Khamenei would like the credit for the lifting of sanctions to go to the hardliners.

But Khamenei has taken this gamble despite considerable public hostility to the overt manipulation of the election. Recent polls suggest a low voter turnout of about a third of the electorate which could dilute the credibility of the new President and condemn the country to domestic turmoil.

There could be longer term political implications as well. The economist Djavad Salehi-Isfahani has pointed out (“Iran’s middle class and the nuclear deal”; brookings.edu) that the educated middle class plays a central role in determining the direction of Iran’s elections: earlier, in the absence of harsh sanctions, Iran’s economy had grown exponentially and expanded the size of the middle class.

In 2013, with the prospect of the end of sanctions, Rouhani won the presidential election, when the middle class was nearly 60% of the population. The lifting of sanctions after the nuclear agreement saw him through during the 2017 elections as well.

However, the re-introduction of sanctions by the Donald Trump administration cost the economy about $200 billion: the middle class has been reduced by eight million, while those living in extreme poverty have increased five-fold to 20 million. Poor medical facilities have caused pandemic-related deaths of around 80,000 people.

U.S. sanctions have also changed political attitudes: support for the nuclear agreement has gone from 80% in 2015 to just 50% today, while reformist politicians have been discredited due to their failure to obtain the easing of sanctions.

The principal concern of the new President will be economic: Iran’s inflation rate has gone from 10% in 2017 to 50% today, the national currency has depreciated four times in value, while unemployment is over 12%. The easing of sanctions after an agreement on nuclear issues in Vienna will remove restrictions on Iran’s oil and financial sectors and help bring much-needed relief to the beleaguered population.

However, it does not seem that much else will change. Iran’s politics is likely to remain fractious, with the clerics seeking to ensure that effective authority remains with them, while the reformists will try to nibble away at the ideological edifice, usually with limited success.

In the regional arena, Iran is likely to continue its present approach of combining pragmatic peace moves with confrontation: quiet dialogue with Saudi Arabia on the Yemen conflict could make progress, though Syria will take longer to settle as the Islamic Revolutionary Guard Corps and its ally, Hezbollah, are deeply invested in that theatre.

Again, there will be no let-up in Iran’s confrontation with the U.S. and Israel. The Carnegie scholar, Karim Sadjadpour, has reported Khamenei’s observation that “the revolution needs enmity with America” (https://bit.ly/3veSaoW). However, hostility to Iran and its Revolution is also deeply ingrained in the U.S. psyche,which has meant that earlier peace overtures from the Islamic republic have repeatedly been rebuffed by Washington.

Thus, the “Cold War” between the two will continue, along with occasional skirmishes with Israel, not just in Syria, but also in the Red Sea and the Gulf of Aden. Iran will seek strategic comfort in closer ties with Russia and China.

Donald Trump’s policy of “maximum pressure” that, with its crippling sanctions, was meant to achieve regime change in Iran, has had the ironical effect of tilting Iran’s political balance sharply in favour of the hardliners. They will now control the levers of power in Iran for the foreseeable future.