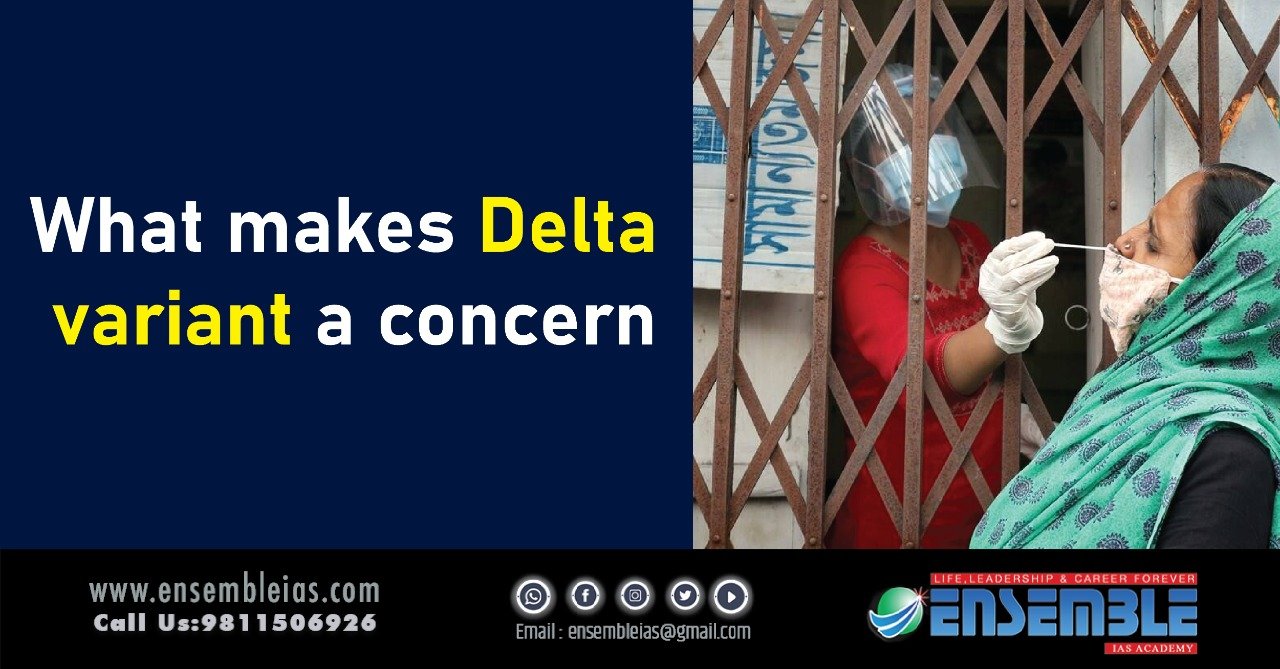 What makes Delta variant a concern

What makes Delta variant a concern: In its latest risk assessment for SARS-C0V-2 variants, Public Health England (PHE) has said a staggering 61% of the samples sequenced are now of the Delta variant (B.1.617.2). This means the Delta variant, first detected in India, is more dominant in the UK than the Alpha variant that had last year triggered a surge in the UK.

Multiple SARS-CoV-2 variants are circulating globally. One of these is the B.1.617 lineage, detected in India earlier this year. Early evidence suggests that its sub-lineage B.1.617.2, known as the Delta variant, is more transmissible than contemporary lineages.

The World Health Organizaton (WHO), which has given it the label Delta, has categorised it as a variant of concern (VOC). It has said it continues to observe “significantly increased transmissibility” and a “growing number of countries reporting outbreaks associated with this variant”.

WHO classifies a variant as a VOC when it is associated with an increase in transmissibility or detrimental change in Covid-19 epidemiology; increase in virulence; or decrease in the effectiveness of public health measures or available diagnostics, vaccines, therapeutics.

What makes the Delta variant a VOC?

Different variants are characterised by mutations — or alterations in the virus’s genetic material. An RNA virus, such as SARS-CoV-2, is made of about 30,000 base pairs of amino acids, placed like bricks next to each other.

An alteration in any of these base cause a mutation, effectively changing the shape and behaviour of the virus. The Delta variant contains multiple mutations in the spike protein. At least four mutations are important.

One of these is called L452R, first reported in Denmark in March last year. This mutation has been found more transmissible than wild-type strains and also been associated with reduced antibody efficacy and reduced neutralisation by vaccine sera.

The mutation P681R has been associated with chemical processes that may enhance transmissibility, PHE says.

The D614G mutation was first documented in the US early in the pandemic, having initially circulated in Europe. “There is evidence that variants with this mutation spread more quickly,” the Centers for Disease Prevention and Control (CDC) says.

Another mutation in Delta is T478K. This was present in around 65% of occurrences in variant B.1.1.222, first detected in Mexico last year and associated with higher infectivity.

What is the evidence so far on transmissibility?

Public Health England said Delta continues to demonstrate a substantially increased growth rate compared to Alpha across multiple analyses. In the week beginning May 17, PHE analysis of genome sequencing data in the UK found that 61% of cases are delta.

What is the evidence on severity?

PHE said early evidence from England and Scotland suggests there “may be an increased risk of hospitalisation compared to contemporaneous Alpha cases”. “A large number of cases are still within the follow-up period. In some areas, hospital admissions show early signs of increasing, but the national trend is not clear,” it said.

How effective are vaccines?

On Friday, a paper in The Lancet said adults fully vaccinated with the Pfizer-BioNTech vaccine are likely to have more than five times lower levels of neutralising antibodies against the Delta variant than against other variants. “In the longer term, we note that both increased age and time since the second dose of BNT162b2 significantly correlate with decreased NAb activity against B.1.617.2 and B.1.351—both of which are also characteristic of the population in the UK at highest risk of severe Covid-19 ,” the study states.

Also Read: lesson From an About-Turn

Is the Delta variant associated with reinfection?

The latest analysis of 874 cases of reinfection in the UK shows that 556 were of Alpha variant, and only 96 were with the Delta variant. “During the period of time that Delta became prevalent, there has been no increase in PCR-positive participants in the… cohort overall and reinfections remain at very low numbers in individuals previously either PCR positive or seropositive,” the PHE said.