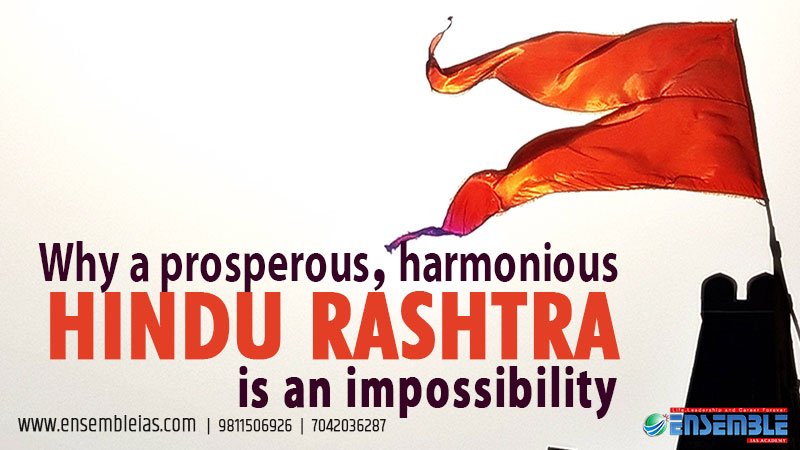 While most Indians understand India’s pluralism, secularism and democratic credentials, there’s still a fair percentage of the population that likes the concept of a Hindu Rashtra. Ethics, morals and bigotry apart, it is important to understand that even in practical terms, a prosperous Hindu Rashtra (harmonious Hindu Rashtra) is an impossibility.

Instead, India and Hindus would do better if we focus on economic growth for a few decades, and use our new clout due to prosperity to promote Hindu culture. The purpose of this piece is not to denounce Hinduism, Hindu culture or present an extra-liberal argument. It is to figure out how best we can achieve maximum glory for our religion and culture.

While definitions of a Hindu Rashtra vary, the people who like the idea think it comprises one or more of the following: an India where Hindus are first among equals; where rules give priority to Hindu sentiment; no special preference is given to minority religions; a certain degree of Hindu religious diktat determines how people live and behave; laws are framed keeping in mind the principles of the religion.

While elite liberals may scoff at these ideas, it is important to understand the thinking of those who back them. Hindu Rashtra supporters feel Hinduism is an excellent, tolerant religion so a good base to govern a nation; India is effectively the only true home of Hindus, so India should adhere to it more; our ancient dietary, relationship and lifestyle advice is wonderful for everyone to follow anyway. After all, what is wrong in using a good code of life to govern ourselves?

Well, the simple answer is that it is utopian to think a religion with wonderful rules will translate to wonderful execution of those rules by humans in power. In the hands of the Taliban, who were also trying to enforce God’s way on people, Afghanistan became a living hell. To say that Hindus and Hindu rulers will be different is silly. Christian religious states have exploited people. With a horrendous caste system, Hindu states have oppressed their people too. We will find other ways to divide ourselves, whether it be caste, or region or even sects like Sanatan Dharma and Arya Samaj. If you have hated a community before, you will hate another community later.

However, there’s another huge problem with India as Hindu Rashtra(harmonious Hindu Rashtra). We may become one, but we just won’t make much money. History has shown that countries have become rich either because they have been blessed with enormous natural resources or they have embraced modern scientific thinking and lived in social harmony.

The only rich Islamic countries in this world are those that struck oil. The Middle-East does run religious states and enjoys high per capita income. However, they literally have petro-dollars flowing out of the ground. With so much money, you can get away with it. Without money, Islamic countries don’t do well. Afghanistan, Pakistan, Sudan and Somalia are some examples.

Hindu Rashtra (harmonious Hindu Rashtra) lovers, unfortunately, have no oil. So unless we discover huge oil pits in Nagpur or Varanasi, we pretty much have only one way to make India rich — hard work, modern science and social harmony. Otherwise, even if you snatch a Hindu Rashtra, you are not going to be a glorious one.

India’s demographics suggest we just cannot even attempt to re-engineer India’s pluralistic democracy. You cannot wish away 15 crore Muslims or turn them into second-rate citizens. The rise in resentment and therefore radicalism alone will make India a living hell. We also have a very young population, most of which needs good jobs. Hindu Rashtra attempts will destroy investment, business sentiment and harmony.

India has risen in per capita GDP terms, and we are at a respectable $2,000 level right now, from languishing at $300 in 1991. This rise in affluence is partly responsible for the rise in India’s pride and nationalism. It is also responsible for our hidden repressed desires coming out — such as asserting Hindu supremacy and hardline nationalism. But this prosperity has not come because of a religion but because India is seen as a democratic, modern, hard working, entrepreneurial country. If we had chosen to turn India a Hindu land in 1991, we would be nowhere today. Hindus are proud today because we remained harmonious and focused on growth. Let us remain that way. The day this per-capita GDP reaches $10,000, everything about India will be more glorious. Let us put our heads down and focus on growth and harmony — the rest will follow. We don’t have oil. We only have our hard work and our ability to work as a team to prove ourselves to the world.

Source: The Times of India  |