Why did Pakistan stop the imports of cotton and sugar from India, and why has it reversed its decision? What kind of trade relations have the two countries had?

Pakistan on Wednesday decided to lift its nearly two-year ban on imports of cotton and sugar from India.

Given their tumultuous relationship, trade between the neighbors has always been linked to politics. So, India’s exports to Pakistan fell around 16 per cent to $1.82 billion in 2016-17 from $2.17 billion in 2015-16 after relations deteriorated in the aftermath of the Uri terror attack and the Indian Army’s surgical strikes on militant launchpads in Pakistan-occupied Kashmir in 2016.

Growth of imports from Pakistan slowed to around $494.87 million in 2018-19 — an increase of around 1 per cent – before political relations entered a deep freeze in 2019.

Over the years, India has had a trade surplus with Pakistan, with much less imports than exports. Pakistan was among India’s top 50 trade partners in 2018-19, but was pushed out of the list in 2019-20. It had been anticipated that a trade ban between the countries would affect Pakistan more, since it relied heavily on India for key raw materials for its textiles and pharmaceuticals industries.

In 2018-19, cotton ($550.33 million) and organic chemicals ($457.75 million) accounted for around half of Pakistan’s imports from India. Other major Pakistani imports from India that year included plastic ($131.19 million), tanning/dyeing extracts ($114.48 million), and nuclear reactors, boilers, machinery, and mechanical appliances ($94.88 million).

After the ban, imports of these five products fell drastically to $1 million to $2 million between April 2020 and January 2021, while cotton imports stopped altogether. The only increase has been in pharmaceutical products – Pakistan has so far imported around $67.26 million worth of drug products, and over $115 million worth of organic chemicals to ensure sufficient supplies of medicines during the Covid-19 pandemic.

The country imported these products in substantially higher volumes from other countries – $25.51 billion worth of mineral fuels and oils from Saudi Arabia; $840.80 million in edible fruits and nuts from the US; $566.52 million in salt, Sulphur and plastering materials from the UAE; $862.00 million in ores, slag and ash from Chile; and $83.36 million in raw hides, skin and leather from Italy. 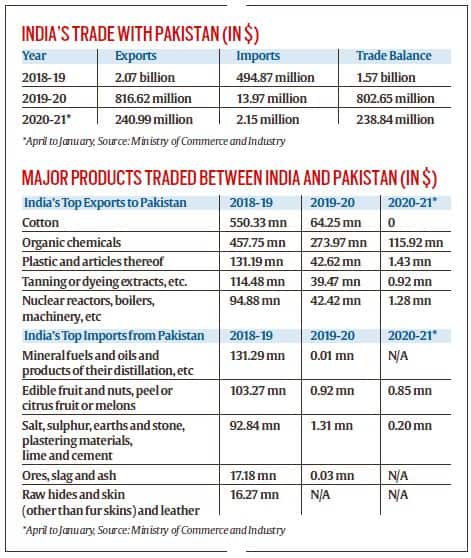 Pakistan’s decision to suspend bilateral trade with India in August 2019 was a fallout of the constitutional changes in Jammu and Kashmir, which Pakistan said were “illegal”. However, an underlying reason for suspending trade was the 200 per cent tariff imposed by New Delhi on Pakistani imports earlier that year after India revoked Pakistan’s Most Favoured Nation (MFN) status in the aftermath of the Pulwama terrorist attack.

Also in Explained |A step in Pakistan’s ‘rational shift’, result of multiple pressures

Why the change in position now

The Pakistani decision to lift the ban on cotton imports comes in the backdrop of a shortage in raw material for Pakistan’s textile sector, which has reportedly suffered due to low domestic yields of cotton. Also, imports from countries like the US and Brazil are costlier and take longer to arrive.

“A meeting was held with the Prime Minister @ImranKhanPTI escalating prices of cotton yarn were discussed,” Abdul Razak Dawood, commerce and investment adviser to the Pakistani Prime Minister, tweeted on March 29.

The decision on sugar was dictated by high domestic prices. Pakistani sugar imports in the period July 2020-February 2021 zoomed to 278,733 metric tonnes from 4,358 metric tonnes in the same period in 2019-20. The increase in imports of the commodity was a measure “to stabilize the market prices”, Dawood said in a tweet on March 2.

Following the meeting of the country’s Economic Coordination Committee (ECC) on Wednesday, Pakistan’s Finance Minister Hammad Azhar said sugar imports would be allowed from India, as the price of the commodity was lower in India than in Pakistan.

“There has been sugar dependence between the two countries forever. Typically, what happens is, (because) they (Pakistan) produce sugar and we (India) also produce sugar, whenever they have a shortage, we have supplied their requirement and vice versa,” said Prof Nisha Taneja of the Indian Council for Research on International Economic Relations (ICRIER), an expert on India’s regional trade.

“Even when we had a very small positive list (of goods for trade with Pakistan), agricultural commodities were always there in the list,” she said.

Several experts expect Wednesday’s decisions to re-open the door for trade between India and Pakistan. This might be a good time for India to explore a reduction in its 200 per cent import duties on products that its industries can benefit from, Prof Taneja said.

“We have not reduced duties on anything…at 200 per cent duty, everything becomes unviable,” she said.

“I think the (Indian) industry would play a very important role in this. It is for the industry to say this is what we need and this is where duties can be brought down.”