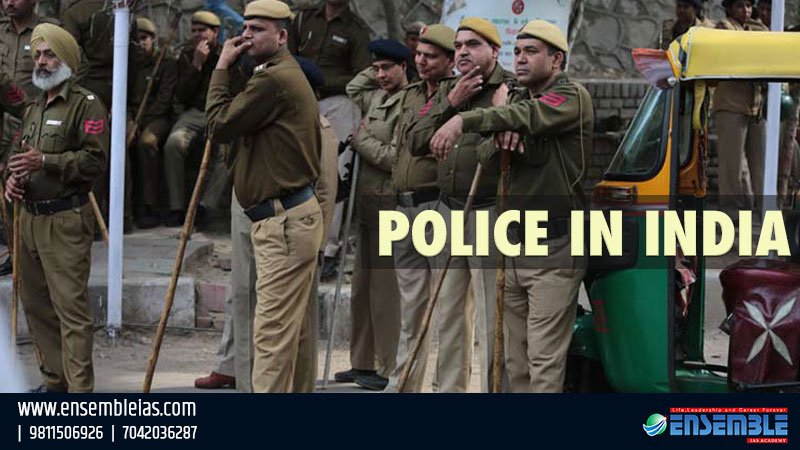 Police in India are subject to dual control — although their administration under The Police Act, 1861 is vested in the police hierarchy, the District Magistrate exercises general control within his jurisdiction.

Police in India are subject to dual control — although their administration under The Police Act, 1861 is vested in the police hierarchy, the District Magistrate exercises general control within his jurisdiction. All preventive actions initiated by police — from securing bonds of good behaviour from potential trouble makers, including habitual offenders, to using force during any law and order situation — require the executive magistrate’s order.

The Inspector General of Police (nowadays called DGP) is also entrusted with magisterial powers under the Act, although these are subject to limits imposed by the state government from time to time. Although most states have drawn up their own police Acts (and repealed The Police Act of 1861) following directions issued by the Supreme Court in Prakash Singh v Union of India in 2006, dual control over police has been retained.

The draft Model Police Act prepared by the Soli Sorabjee Committee to have a uniform law for police forces across the country, has not been adopted by any state. Since ‘public order’ and ‘police’ are part of the State List in the Seventh Schedule of the Constitution, it is for the states, and not the Centre, to initiate the bulk of police reforms.

Subsequently, separate Acts (i.e., The Calcutta Police Act, 1866, The Madras City Police Act, 1888, The Bombay Police Act, 1951) were created to regulate these presidency towns. Ahmedabad in Gujarat was the fourth city to get a Police Commissioner vide The Gujarat Adaptation of Laws (of Bombay) Order in 1960. Delhi got its Commissioner of Police following the recommendations of the Khosla Commission, and the enactment of The Delhi Police Act in 1978.

Later, the metropolitan cities of Tamil Nadu (Madurai and Coimbatore in April 1990, and Salem, Tiruchirappalli, and Tirunelveli in June 1997); Odisha (Bhubaneswar-Cuttack in January 2008); Haryana (Gurgaon in June 2007, Faridabad in August 2009, and Panchkula-Ambala in August 2011); Punjab (Amritsar, Jalandhar, and Ludhiana in February 2010); Rajasthan (Jaipur and Jodhpur in January 2011); Andhra Pradesh (Cyberabad in December 2003), Gujarat (Surat, Rajkot and Vadodara); West Bengal (Bidhannagar and Barrackpore in January 2012); and Karnataka (Kalaburgi in October 2018) too, got police commissionerates.

Maharashtra has the most cities — 11 — with the police commissionerate system; the latest to join the list was Mira-Bhayander late last year. Hyderabad got its Police Commissioner through The Hyderabad City Police Act of 1348F. (‘Fasli year’, which is 590 years behind the Gregorian calendar)

Powers of the police

The most important source of the police’s magisterial powers is The Code of Criminal Procedure (CrPC), 1973. Section 20(1) authorises the state government to appoint as many executive magistrates “as it thinks fit”, and Section 20(5) provides for conferring the powers of an executive magistrate on a Commissioner of Police in a metropolitan area. Under Section 8, the state can declare any area with a population of more than 1 million, a metropolitan area. The previous CrPC of 1898 too contained similar provisions.

Much depends on how much power is entrusted to police to effectively check crime. The Orissa Urban Police Act, 2003 (Orissa Act 8 of 2007) for example, gives ample powers to police to prove their mettle; the Police Commissioner of Gurgaon, on the other hand, had no powers of an executive magistrate to begin with.

The powers of an executive magistrate provided under several special Acts (such as The Arms Act and the Excise Act), which are essential to check the mafia and effectively control crime, remain out of reach of police in many states including Rajasthan and UP. Although Salem, Tiruchirappalli and Tirunelveli got Police Commissioners in 1997, powers under certain special Acts were transferred only in November 2006.

In June 2019, the posts of Inspector General of Police of Kochi and Thiruvananthapuram were changed to Commissioners of Police without any transfer of powers of the executive magistrate. Madhya Pradesh, Bihar, Jharkhand, Chhattisgarh, the Northeastern states, Jammu & Kashmir, Uttarakhand and Himachal Pradesh are yet to introduce the Police Commissioner system.

The idea of entrusting greater powers to police via a police commissionerate system is often accompanied by apprehensions of a “police raj”, alongside questions over the fitness of police to exercise these powers. These apprehensions are baseless.

While certain aberrations are indeed seen in some states, the Police Commissioner system in itself has many advantages. It enlarges the role of the police and allows it to work as an agency that promotes the rule of law and renders impartial service to the community. Unified control over the crime prevention and detection mechanism in the hands of the police hierarchy has great potential to improve public order. An integrated command structure enables the police to exhibit its comprehensive responsiveness, and to avoid the game of blame-shifting to other agencies.

The National Police Commission set up in the 1970s to suggest police reforms, noted that large urban areas in which crime and law and order situations develop rapidly, require a speedy and effective operational response from police. This can be possible only when the police are organised to perform the twin basic functions of decision-making and implementation.

The Commission recommended that in cities with populations of 5 lakh and more, and in places that witness special circumstances like speedy urbanisation, industrialisation, etc., the system of police commissionerate would provide more effective policing. In fact, the situation in cities changes so quickly that the system of consultations between executive magistrates and police officers before taking preventive measures often leads to delays and confusion in urgent situations, which eventually attracts criticism from the public.

An overall strengthening of the police structure and many reforms are needed — the adoption of the commissionerate system is an effective first step in achieving the objectives of crime-fighting and maintaining the rule of law.