Why this winter is extra cold: December is always cold in northern India but has been much more so this year. A look at temperature trends, records broken or on the way to being broken, and the possible causes leading to the extreme chill

Extreme cold temperatures, rainfall and intense fog in the months of December and January are not something new for north and northwest India. And yet, this December, north India is feeling the cold much more than earlier. How low have the temperatures been, and why? Winter Extra Cold.

What is usual, what is different

Every year, in the second half of December and the first half of January, temperatures routinely drop to 2-4°C at some point of the day in many places in north and northwest India.

In December, the maximum daily temperature does not rise beyond 16-18°C in most of Punjab, Haryana, Himachal Pradesh and western Uttar Pradesh. In Delhi and northern Rajasthan, daily maximum temperatures are usually not over 20-22°C for most of December.

This winter, in many parts of the region, maximum temperatures on some days have been nearly 10°C below normal.

In Delhi, the average maximum temperature for December has been less than 20°C until December 27. This has happened only four times in the last 118 years, and the IMD has said this month would most likely become the second coldest December for Delhi since 1901. The maximum temperatures had averaged 17.3°C in December 1901.

How cold is cold

Cold-day conditions prevailed in the north since December 15, and intensified after December 21. The most intense cold day — when maximum temperatures fell 7°to over 12°C below normal — was on December 25 over Punjab, Haryana, Chandigarh, Delhi, Uttar Pradesh, north Rajasthan and some isolated areas in Bihar and Madhya Pradesh.

While the extreme cold in north India could point to some special causes, scientists say there is nothing unusual in the climatic conditions that influence temperatures in this region at this time of the year. The cold wave usually arrives from the west, through the Western Disturbance wind system.

This system is also responsible for causing rains in northern and northwestern parts, after having picked up moisture on its way from the Mediterranean Sea. The intensity of the cold also depends on the amount of snowfall that happens in Jammu and Kashmir, Ladakh, Himachal Pradesh and nearby areas.

“All these factors have their annual variabilities. They combine in different ways to produce different kinds of winter conditions. If you look at the climatic conditions this year, no special set of circumstances is visible at the macro level that can be held responsible for causing extreme cold.

That can imply that the extreme cold being witnessed is just one of the outlying cases of natural variability that we see from year to year,” said a former India Meteorological Department (IMD) scientist. 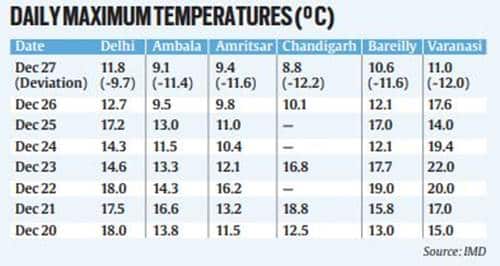 A cold-wave condition now prevails in areas north of Jammu and Kashmir, in northern Afghanistan, Tajikistan, Uzbekistan, Turkmenistan and parts of northern Iran.

In all these areas, average temperatures have been 1° to 5°C below normal for the last few days. This could add to the chill bring brought about by the Western Disturbances. North-central China and Mongolia are also experiencing similar conditions.

CLIMATE CHANGE: The unusually cold December this year could just be another instance of extreme climates becoming more and more frequent, a result of climate change. Across the world, the frequency and intensity of both heatwaves and cold waves have increased in the last few years, and are predicted to increase further.

The same is the case with extreme rainfall and drought. Just this year, India experienced an unusually wet August and September. The amount of rainfall that September produced was a once-in-a-century event. Scientists also agree that climate change was bringing in greater uncertainty in weather patterns, making them more difficult to predict.

WESTERN DISTURBANCES: Frequent western disturbances varying from moderate to intense have mainly contributed to the severe cold over all of north India this year.

In addition, the flow of northwesterly winds over northwest India, that too over much lower levels, further fuelled the chill factor, making the days much colder than normal during December. This December also witnessed haze, fog and rainfall after the passing of each western disturbance, triggering cold weather conditions over north India.

This extended cold spell has been triggered due to low stratus clouds that are blanketed over a large geographical area — between Pakistan, cutting across India and running up to Bangladesh. Similarly, it is prevailing over a stretch of 500 km to 800 km north-south, affecting the entire north India.

R K Jenamani, senior scientist at IMD’s National Weather Forecasting Centre (NWFC), New Delhi, said that formation of such clouds are unique over the Indo-Gangetic Plains (IGP) and that these clouds have been observed only since 1997. “ As these clouds are formed at a height of 300 metres to 400 metres from the surface, they largely block the day’s sunlight, resulting in cold days,” he said.

“The average maximum temperatures for the month stands around 19.8 degrees (in Delhi, until December 27) and with cold days forecast till month end, December 2019 could be the second coldest after 1997. But, the impact could be higher than that experienced in 1997,” Jenamani said.

In fact, cold conditions during the daytime can be more dangerous, said Anupam Kashyapi, head of the weather department at IMD, Pune.

Why this winter is extra cold: