Situation: Antarctica, centred on the South Pole, is situated 960 km from South America, 2,700 km from Australia and 4,000 km from South Africa. It is surrounded by Southern or Antarctic Ocean, formed from the southern waters of Pacific, Indian and Atlantic Ocean.

Shape: Except for the deep indentations of the Ross and Weddell Seas and the projecting peninsula, the continent is roughly circular in shape.

Climate: World’s coldest continent and remains covered with very thick layer of ice, therefore known as ‘white continent’. Precipitation, in the form of snow (equal to 5 cm of rain) making Antarctica, one of the earth’s great desert.

The Land: Antarctic Continent is the highest of all the continents, averaging 6000 feet in elevation. Ice sheet covers 95% of Antarctica, and exposed areas are rugged and mountainous. The principal mountain chain is Trans Antarctic which divides the continent in almost two equal parts. Ellsworth Mountain, fringing the coast, contains Antarctica’s highest peak, the Vinson Massif (5,140m). Mt. Erebus, the only active volcano, is located on the Ross Island.

⮚ The only continent with no permanent population.

⮚ It is linked to Tierra del Feugo by the submarine Scotia Ridge.

⮚ It is a great scientific laboratory hence also called ‘ continent for science.’

⮚ There are valuable minerals like iron, copper, coal, petroleum in Antarctica but high costs involved makes exploitation of these resources uneconomic.

⮚ Expedited by many, and first expedition by India in 1981-82 near Queen Maud region of Antarctica, and named it as Dakshin Gangotri (Mount Indira).

⮚ Other countries have base camps to carry out research throughout the year.

⮚ South Magnetic Pole is located to the southeast of Greater Antarctica in the Indian Ocean.

⮚ The sheer weight of the ice has warped the continent downward so that much of the land of Antarctica lies below sea level.

⮚ In 1985 at the South Polar Region an alarming discovery was made by British Antarctic Survey. An ozone hole (formed due to ozone depletion) was found over the polar atmosphere.

It includes the Arctic Ocean and the North Polar Seas. 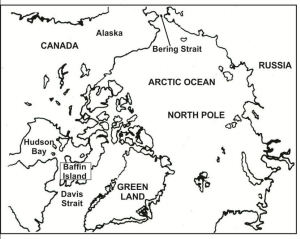 CHARACTERISTICS OF THE REGION

⮚ Stationary polar ice. Polar ice is about 3 m thick and is located directly over the North Pole.

⮚ Absence of vegetation (only mosses and lichens at very few places may be found).

⮚ The coldest place in the northern hemisphere is not the North Pole (because of moderating influence of Arctic Ocean) but 2,414 km south of North Pole (Siberian town of Verkhoyansk).

⮚ Polar Bear is the best known animal in the Arctic Region.

⮚ Huge Alaskan oil reserves is the most important resources of the region.

⮚ The Arctic fringe and offshore islands are part of CIS territory and it is a very sensitive area with aircraft and missile detection devices. Now the region is becoming new home for many Russian scientists.