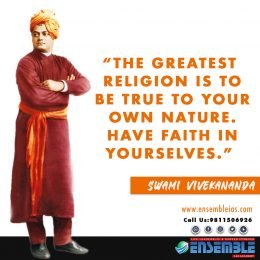 Swami Vivekananda is the one of the greatest spiritual leaders of India. He not only brought glory of the Hindu philosophy in the forefront of the world but worked for its propaganda and spread the deeper meaning of Hinduism .
Born on January 12, 1863, as Narendra Nath Datta in Kolkata belonged to an aristocratic Bengali Kayastha family. But was not happy with the luxuries of life and soon he became a deciple of the famed saint of Dakshineshwar, Swami Ramkrishna Paramhansa. He renounced worldly pleasures and became a sanyasi to serve humanity.

Swami Vivekanada was a key figure for introducing the Indian Vendanta and philosophies of Yoga to the world which put India on the world’s spiritual map.
His speech at the World’s Parliament of Religions in Chicago, 1893 became very famous and it changed the way the world looked at India. This enhanced the respect towards India and the Indians.

Vivekanand had the vision to revive the culture and ancient language of India. He wanted that every Indian should be educated in the real sense and should have a sound foundation. Therefore to fulfil this objective he founded Ramakrishna Math and the Ramakrishna Mission. This was a platform to enlighten and awaken people’s religious consciousness. He worked for uplifting the downtrodden. He promoted the idea of nationalism in India in the 19th century.

“The greatest religion is to be true to your own nature. Have faith in yourselves.”