Land and Sea Breezes
Coastal areas often experience land breezes and sea breezes. They are caused due to diurnal differential heating of land and sea. During the daytime, the land warms up more than the water. Thus, there is low pressure over land and high pressure over water body. Over the land, as the warmed air rises, creating a low pressure, air from the surrounding ocean which are comparatively cool and moist blows into the land to replace the air that is rising. This flow of air is called a Sea Breeze. During the night, the land cools more rapidly than the water. This not only produces a local High Pressure but conserves heat and remains warmer for a longer period. The resultant energy and high pressure induces a flow of air from land to sea. This flow is called a land breeze.
Sea and land breezes are common in the tropics during most of the year and at middle latitudes during the summer. Sea breezes usually produce a line of clouds just inland along a tropical coastline or above tropical islands.

The influence of sea breeze is over a small area and does not exceed 25 km from the Coast. Its speed is between 8- 30 km/ph and is generally stronger in tropical than temperate regions. The coastal resorts are most benefitted by these winds.

The life of the fishermen in the tropical coastal area hinges on these winds. During the night time they are blown seaward by the land breeze while during the day time the sea breeze blows them back towards the coast.

Mountain and Valley Winds
On clear nights, long wave radiation loss from the mountain ridge will lead to considerable cooling of that surface and its overlying air. Cooling of the valley sides and floor will be much less marked because of the radiation exchanges between the two valley walls and the floor. As a result, the cooler denser air of the top will start sinking to the floor following the mountain slope (hence slope winds), moving down as low generally smooth flow. This is the katabatic wind. Steep slope accelerate katabatic flow. Along the edge of massive Greenland and Antarctica ice sheets, katabatic winds frequently exceed 100 km-1/h. Although the speed of the flow depends on the angle of slope and the roughness of the surface, it is found to be approximately proportional to the square root of the temperature difference between the top and the bottom of the valley. Katabatic winds are frequently experienced in certain areas and are given local names. In the Adriatic Sea, a katabatic wind forms between north and east, which usually blows in winter and is known as Bora. The Mistral, which blows down the Rhône valley and over the Gulf of Lyons is another Katabatic wind. Where such winds reach the sea, being cold and dry, they increase the density of water through cooling and evaporation and thus, promote convective mixing of the water in addition to mechanically induced turbulence.
During sunny days in summer, the higher parts of mountains, the slopes facing the Sun, in particular, become appreciably warmer than the adjacent valleys. This is because the air above the mountain slope, besides being heated by insolation, is also warmed by conduction more effectively than the valley floor. Thus, the air just above the valley top becomes warmer than the air at the same level over the valley itself. This causes convectional activity, leading to light and irregular drift of air up and along the mountain slope. This is known as anabatic wind. 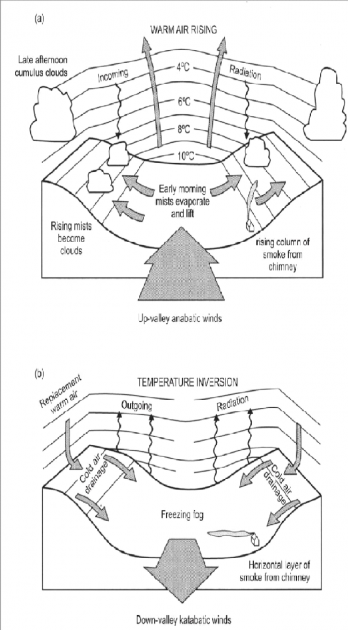 A variation of these winds is the glacier wind, which arises as the air adjacent to the icy surface is cooled and moves downslope because of gravity. These may blow continuously as the refrigeration source is always present but they tend to reach their greatest depth and intensity in the mid- afternoon, when the thermal contrast is greatest.

Föhn Winds
It is a general name given to winds caused by barrier effect and they have their own name in different parts of the world. Air, which is forced to flow over a hill or a mountain range, produces distinctive changes in the characteristics of the flow locally. One such modification is the föhn wind, which blows as a warm and dry wind down ice slopes (leeward side).
This wind develops when relatively mild air descends the leeward slopes of mountain ranges and is adiabatically compressed with increased pressure. For every 1000 m of descent the air temperature rises about 100C, thus the air is greatly warmed as it descends. Similar type of winds are known as Chinook in the Andes and Rockies. Chinook literally means snow-later-in local Red Indian language in America. Chinook melts snow and causes avalanches. But, it brings lots of benefits as well, such as it makes the winter milder,it hastens the growth of crops and fruits through the snow covered pastures.

Similar winds in other parts of the world are Yamo in Japan, Tramontane in Central Europe, Samun in Iran, Norwester
in New Zealand, Berg in South Africa, etc. 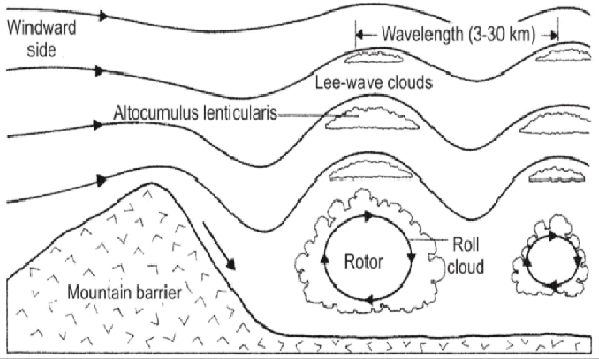 A further consequence of the barrier effect on winds is the creation of lee waves. When the wind passes over a mountain, its normal flow is disrupted and a train of waves is created that extends downwind for considerable distances. Such lee waves are associated with high wind speed up to 160 km per hour. Lee waves may also have rotors, roll-like circulation that develops into the immediate lee of the mountains.

Depression Winds
The position and relief of certain regions gives distinctive character to winds associated with depressions. A moving wind involves air masses originating both on its poleward and equatorward side and therefore, both warm and cold winds result. A depression moving towards Mediterranean results in warm dry winds from the Sahara in the warm sector. The Sirocco in Italy, the Leveche in Spain, the Khamsim in Egypt, the Gibli in Tunisia and the Brickfielders of Victoria in Australia are examples of this. The Polar masses cause strong cold winds. They are Southerly burster in New South Wales, the Pampero of Argentina, the Friagem or Surazo in Brazil, the Norther in Texas, and the Norte and Papagayo in Mexico. In the Mediterranean-Mistral over southern France and the Bora over the Adriatic. 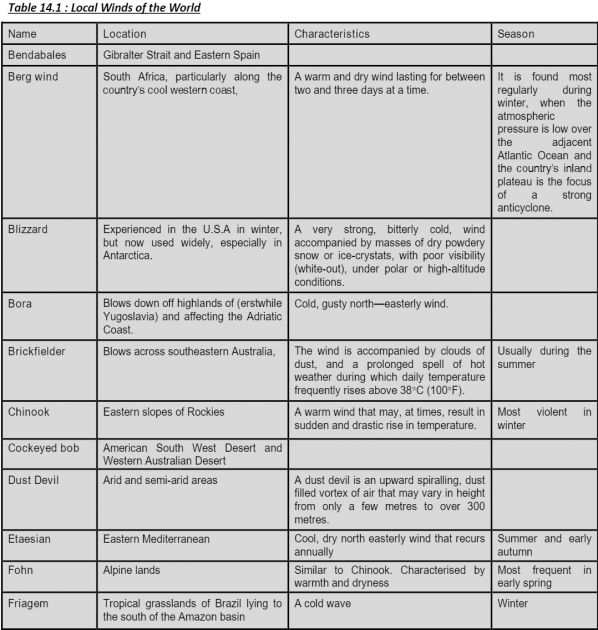 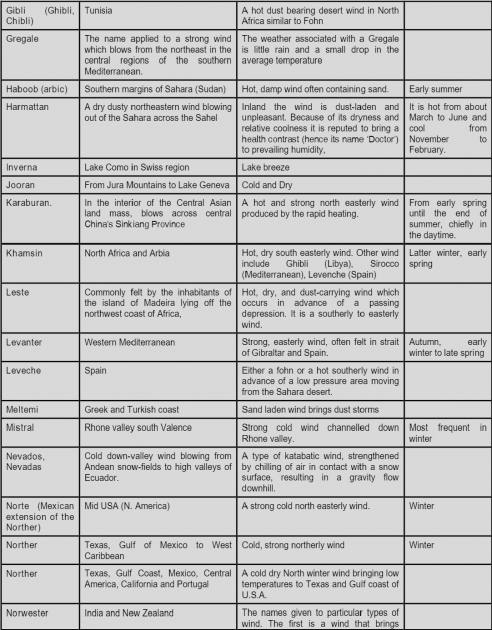 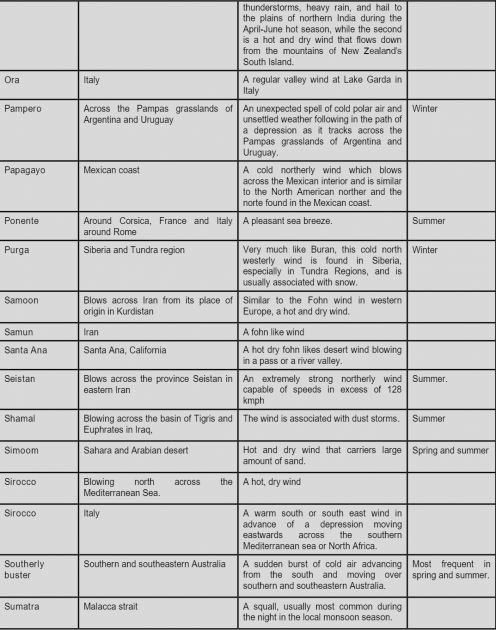 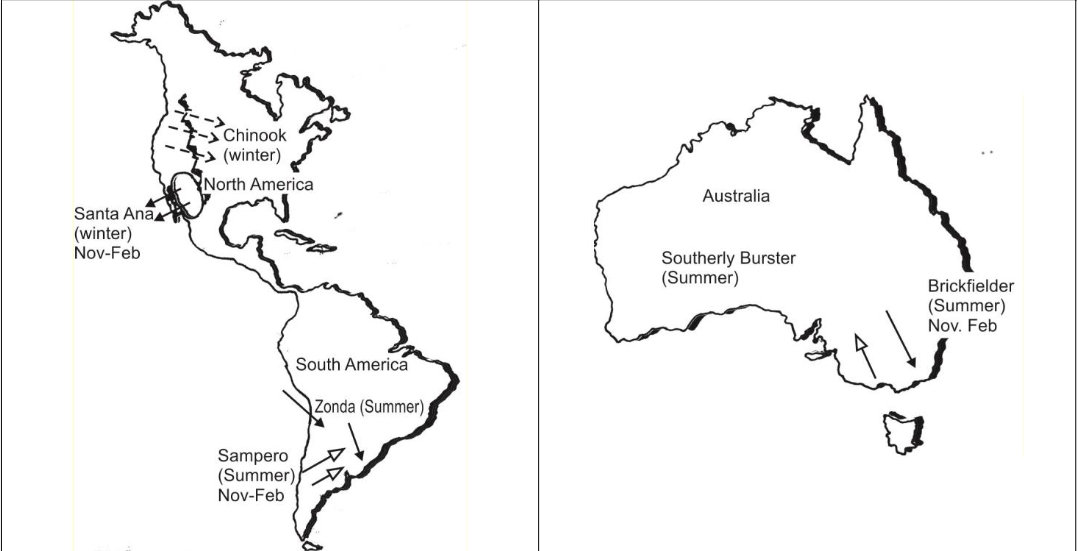 Certain desert winds are the product of intense heating of the ground producing a steep lapse rate, which in turn, induces vigorous convection and gusty surface winds. The strength and gustiness of the wind varies with the intensity of solar radiation, so that wind speed and gustiness peak in early afternoon and during warmest months.
Some variation in desert surface characteristics cause some spots to become hotter than others. If regional winds are weak, local surface winds converge toward hot spots, replacing the hot air rising over hot spots. As the winds converge, they rotate about its vertical axis on much the same way, as water converges towards a drain in a sink. In the process of this rotating convergence, dust is lifted from the ground and the circulation is visible as whirling mass of dust laden air, known as dust devil. Microbursts and dust storms are other forms of convection wind. A cloud of raised dust is generally considered to be a dust
storm, if visibility is reduced to about one kilometer. It is considered severe, if visibility decreases to half a kilometre or less.
Dust storms are caused largely by strong winds. Strong winds are always capable of lifting topsoil and scattering it over large areas, but occasionally, certain conditions combine to produce huge walls of moving dust that carry thousands of tons of soil and debris to another location. Such events tend to occur after an extended drought has left the ground dry and dusty.

Dust storms can lift particles as high as 3000 m and travel several thousand miles. Dust storms generated by vigorous fronts over southeastern Australia have carried soil right across the Tasmania Sea to New Zealand producing a dust coloured red snow on the New Zealand Alps. In North America, a similar phenomenon occurs in the plains. The dust carried from the plains produce dust coloured snow and rain along the Atlantic coast.
Large dust storms leave an enormous amount of fine dust that infiltrates every corner of the house. But the most serious problem that it poses is the removal of the valuable topsoil from farmland.

Thunderstorms
A thunderstorm is a violent storm that develops from cumulonimbus clouds on a hot and humid afternoon. Thunderstorms get their energy from the condensation in the clouds. 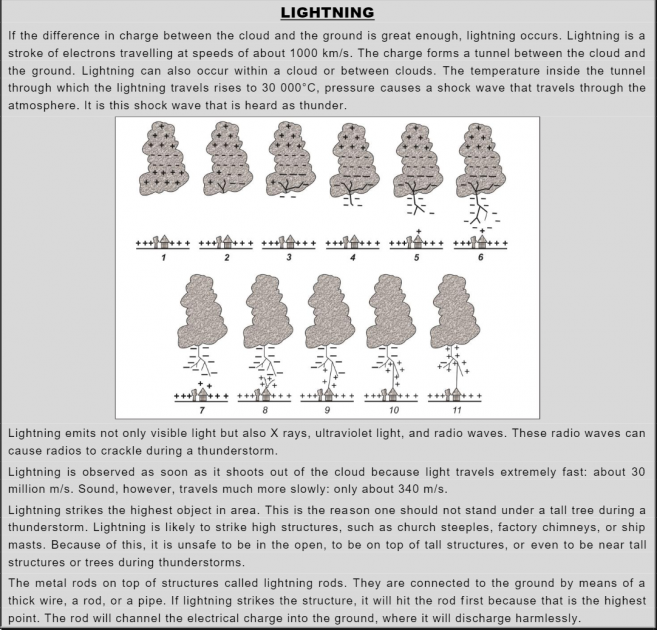 Tornadoes
A tornado is a small, extremely violent storm. Tornadoes are a kind of cyclone because the air is rapidly circulating around a small area of very low pressure. Tornadoes appears like a dark funnel cloud.

Tornadoes occur where two very different air masses collide. One air mass must be warm and humid, the other cool and dry. The advancing cool air pushes the warm air up and away. Warm air rising rapidly along the front condenses into a line of thunderclouds called a squall line. The energy given off by condensation causes violent motions along the squall line, and many small, but very intense, low-pressure areas develop. Some of these areas may form tornadoes.

A tornado starts as a Centre, or vortex, of low pressure. The tornado’s vortex develop from the bottom of the thundercloud toward the ground. These clouds are called as Mamma Clouds. This downward extension is caused not by the air moving toward the ground, but by the air below the cloud being drawn into the vortex.

Air pressure at the center of the vortex is estimated to be 10 to 15 per cent lower than the pressure outside the storm. This sudden pressure drop causes the air drawn into the vortex to become saturated with water vapour. When saturation occurs, water vapor in the cloud begins to condense, making the funnel visible.

The path of a tornado along the ground averages 5 km in length. However, tornado paths often are not continuous. The funnel may touch down and destroy one house on a street and not even disturb the house next door. A tornado lasts, on the average, only five to ten minutes.

Tornadoes are very destructive because of their wind speeds. Horizontal wind speed within a tornado can be as high as 500 km/h. Upward wind speed may be as high as 300 km/h. There are few precise measurements of wind speed within a tornado because the measuring instruments are usually destroyed by the wind. Wind speeds are estimated from the damage caused by the tornado. Updraft speed is based on the fact that objects such as roofs, farm machinery, cattle, and even people have been lifted and carried for hundreds of meters. Tornadoes occur in specific parts of the Earth, and they are most frequent in an area of the United States called tornado alley. As many as 300 tornadoes form there each year.

A Waterspout is a vortex that occurs over open water. Waterspouts are much less powerful than tornadoes because the temperature difference between air masses at sea is usually less than it is over land. Wind speed within waterspouts rarely exceeds 80 km/h. Waterspouts are common in the coastal waters or tropical and semi-tropical areas.