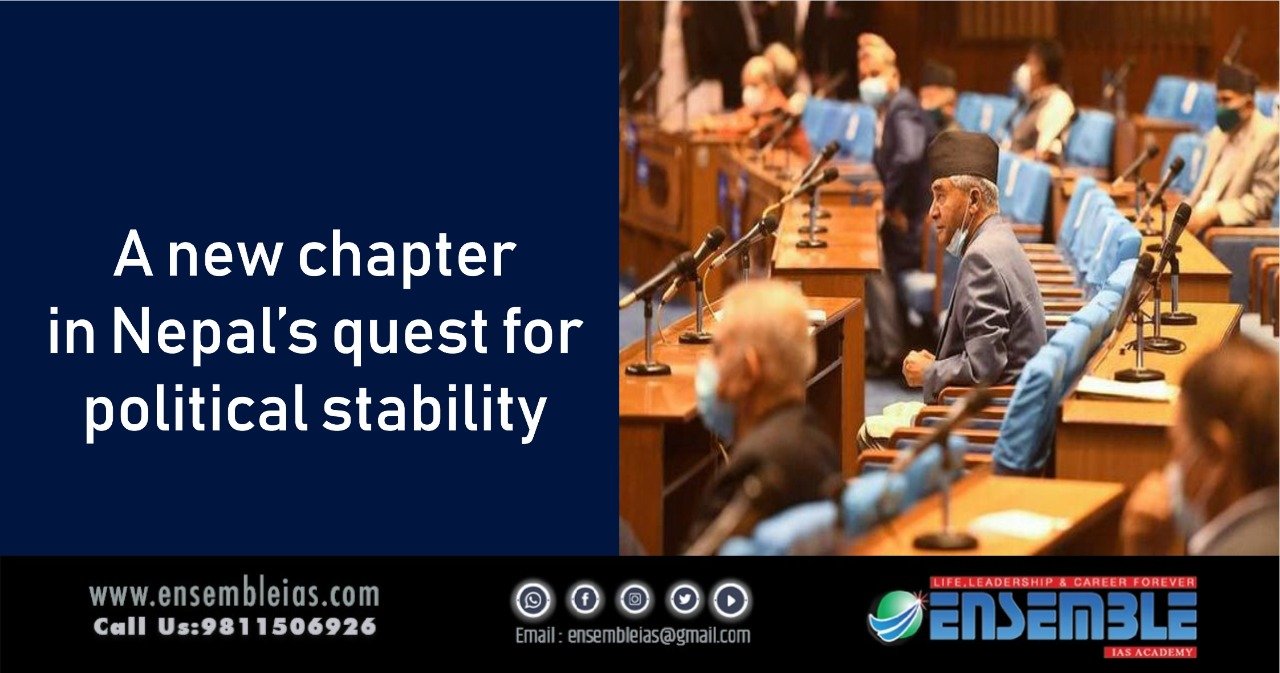 The Supreme Court order offers some respite amidst the political uncertainty, with lessons for Indian diplomacy too

On July 12, 2021, the Supreme Court of Nepal handed over a 168-page verdict on a case filed by 149 lawmakers out of the 275 parliamentarians demanding that Sher Bahadur Deuba be made the Prime Minister. Although the parliamentarians had gone to the Supreme Court as Mr. Deuba had gathered enough support to become the Prime Minister of Nepal under Article 76(5) of the Constitution, President Bidhya Devi Bhandari refused to entertain it. Instead,the President re-appointed K.P. Sharma Oli as the caretaker Prime Minister till the elections that they decided to hold in October and November 2021 were concluded. This ends now.

On Wednesday, July 14, 2021, Mr. Oli left his official residence at Baluwatar which, for the past three and half years, had become his office, party headquarters and the centre of power in Nepal comparable to Narayanhiti Palace during the direct rule of the Kings. He left his residence after addressing the nation in a manner similar to when King Gyanendra left the Narayanhiti Palace on June 11, 2008. His supporters had a procession.

The Oli years
In the past, Mr. Oli’s popularity rose when he challenged India during the blockade in September 2015 and whipped up nationalism to emerge as the leader who could lead Nepal. For the 2017 Federal and Provincial elections, the two major communist parties, the Nepal Communist Party (Maoist) and the Communist Party of Nepal (United Marxist Leninist–UML), joined hands, and with a landslide victory, were to provide a stable government in Nepal in three decades. This coalition between the two parties had laid out some conditions, one of which was that Pushpa Kamal Dahal Prachanda and Mr. Oli were supposed to rotate the prime ministership. Even amidst these conditions and party coalitions, for the general Nepali public, Mr. Oli came with many expectations. He appointed a technocrat Finance Minister, a former Governor of the central bank, and other team members who, in people’s eyes, were perceived to deliver the goods. Prior to taking over, he held various consultations. In one of the long sessions, he gave the impression that he means business. He had a slogan, ‘Prosperous Nepal–Happy Nepali’, that appealed to Nepalis both in the country and abroad, giving a feeling that, perhaps, the great moment has arrived for Nepal’s transformation.

However, the infighting within the ruling party that united in May 2018 began to surface in December 2019. Mr. Oli had, in two years of his rule, ensured that his kitchen cabinet ran the country while his image and international relations were being handled by prominent citizens who kept defending him till the end. He unleashed crony capitalism. Many business groups gained from his rule.

International relations plummeted with Mr. Oli taking on India with an amended map of the country, which only affected bilateral relations. With the United States Millennium Challenge Corporation (MCC) grant not being ratified, ties have been hit as far as U.S. investors are concerned. With China, while he hosted Chinese President Xi Jinping during a whirlwind transit stop, the agreements never saw the light of the day when it came to implementation. The complaints of Chinese investors in Nepal in terms of governance and bureaucracy have been no different than the complaints of others.

However, his handling of the novel coronavirus pandemic created a public outcry due to a lack of health-care facilities. He was personally dragged into the Nepal vaccine scam in the purchase of vaccines from the Serum Institute of India. In his swan song, he tried to take credit for the support that Nepal received, which was more due to the goodwill Nepal has and the efforts of many known and unknown activists who ran from pillar to post in different countries to get support and vaccines for Nepal.

Looking ahead
The newly appointed Prime Minister, Mr. Deuba, has served as Prime Minister four times but does not have a great track record. He may have won the confidence vote of July 18 (picture). But in this, there is a great lesson for India to be learnt: on how not to push relationships through intelligence agencies and other tacit ways as it fails each time. This has been seen in earlier decades. India needs to continue to build on people-to-people relationships and engage through official channels of bilateral platforms and diplomacy. Let us not forget that geopolitics is changing as Nepal is now free from being ‘India locked’.