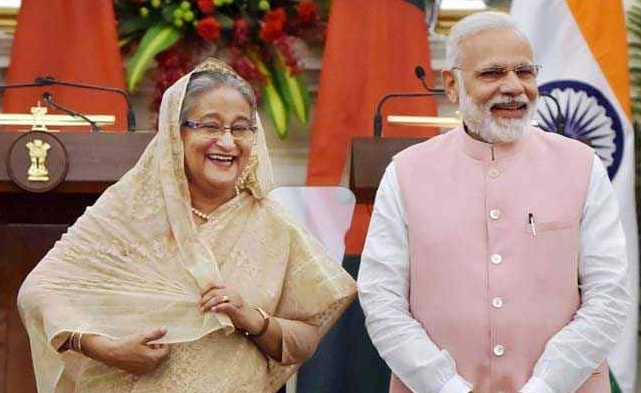 India and Bangladesh, acting together, can drive South Asia’s economic and social progress

PM Modi’s visit to Bangladesh last week was symbolic of the extant golden phase in bilateral ties between the two neighbors. It showcased the breadth and depth of a very unique relationship which has not only been forged in blood but has also been tested at times in the last 50 years, yet managing to navigate occasional turbulence effectively.

While critics of Modi and Bangladesh PM Hasina can continue to focus on irrelevancies in targeting the leaders primarily for domestic political reasons, it remains a matter of fact that the two leaders have managed to put the relationship on an orbit few would have envisioned a few years back.

They have had the foresight to recognise the transformative potential of India-Bangladesh ties for each other’s developmental priorities as well as for wider regional imperatives. And therefore, when Modi visited Bangladesh last week, he was not only celebrating 50 years of Bangladesh’s liberation war and India-Bangladesh diplomatic ties, he was also marking an important inflection point in Bangladesh’s evolution as an economically dynamic and politically stable South Asian state which can, along with India, become a driver of regional momentum.

Bangladesh, long derided by critics, has responded with a spectacular economic performance as it seeks to find its place in the world’s top 25 economies from one of the poorest. It is now an exemplar on economic and social indicators for a large part of the world which is struggling with underperformance and penury. This is particularly true of South Asia where several states continue to struggle with economic and social progress.

Bangladesh’s determination under a resolute leadership has demonstrated what can be achieved if national priorities are defined and operationalised with vision and clarity. Notwithstanding an entrenched political polarisation in the country’s body politic, the focus on effective governance and economic issues in recent years has paid dividends.

Hasina could only provide that leadership after recognising that stable ties with India would be key to ushering in domestic transformation. As Modi remarked during his visit, Bangladesh is a strong example of development and change for the world and India is Bangladesh’s “shoho jatri” (fellow traveler) in these efforts. New Delhi’s unflinching support to the Hasina government during periods of internal and regional turmoil allowed a sense of trust to emerge, which was reciprocated by Dhaka in showing greater sensitivity to Indian concerns.

The Modi government, despite domestic political challenges, got the Land Boundary Agreement approved by Parliament and also accepted the verdict of an international tribunal in the maritime territorial dispute with Bangladesh, which went against India. As New Delhi re-envisioned its foreign policy priorities with a shift to the Bay of Bengal. India-Bangladesh ties emerged as central to that foreign policy vision.

From ‘Neighborhood First’ to ‘Act East’, from connectivity to trade, from security to development, Dhaka’s centrality to India’s regional outlook is key not only for India realising its own interests but also for larger regional imperatives. If India is becoming more ambitious in defining its priorities in the eastern frontier, Bangladesh is more confident than ever in leveraging these opportunities to its advantages. India’s Northeast can hope to gain significantly from this convergence, especially at a time when New Delhi is focusing on the country’s Northeast like never before.

India’s prioritisation of the Bay of Bengal in its regional re-imagination is not only a function of the collapse of Saarc but is also a response to the tremendous opportunities which remain untapped in that maritime space. From making BIMSTEC the core of its regional outreach to shaping BBIN (Bangladesh, Bhutan, India, Nepal) Motor Vehicle Agreement, allowing for the possibility of Bangladeshi exports to Bhutan and Nepal via India, there is a new drive to operationalise the idea of a Bay of Bengal Community.

This will be even more significant as India’s desire to emerge as the locus of the Indo-Pacific narrative becomes even sharper in the coming years. Both traditional and non-traditional security issues shaping this maritime geography will be implicated in the evolving Delhi-Dhaka dynamic.

So even as India and Bangladesh celebrated the historical legacy of their bilateral engagement last week, Modi and Hasina were cognisant that the future of this relationship will be governed by a very different set of factors such as trade, connectivity, health, energy and the aspirations of youth. Even as Modi donated 1.2 million doses of Covid-19 vaccines as a grant, he invited 50 entrepreneurs of Bangladesh to join India’s startup and innovation ecosystem and meet Indian venture capitalists, as well as announcing Swarna Jayanti scholarship for the youths of Bangladesh.

The MoUs on the establishment of sports facilities at Rajshahi College, cooperation between Bangladesh National Cadet Corps and India’s National Cadet Corps, and the supply of ICT equipment, reference books and training for the Bangladesh-Bharat Digital Service and Employment Training Centre are also targeted at the youth, underscoring their key role in shaping the future of India-Bangladesh ties.

The golden age in India-Bangladesh relations may just have begun. Challenges remain but the leadership in the two countries has indeed ushered in a transformative moment in bilateral relations and regional geopolitics. If Delhi and Dhaka are able to leverage this unique moment effectively and realise the full potential of their partnership, not only will South Asia be able to emerge as the anchor in the wider Indo-Pacific, but the people of India and Bangladesh will also be able to once again write another chapter in their shared destinies.