People walk down a busy street in Moscow. Russia’s aging workforce will greatly suppress the country’s economic growth over the next decade. 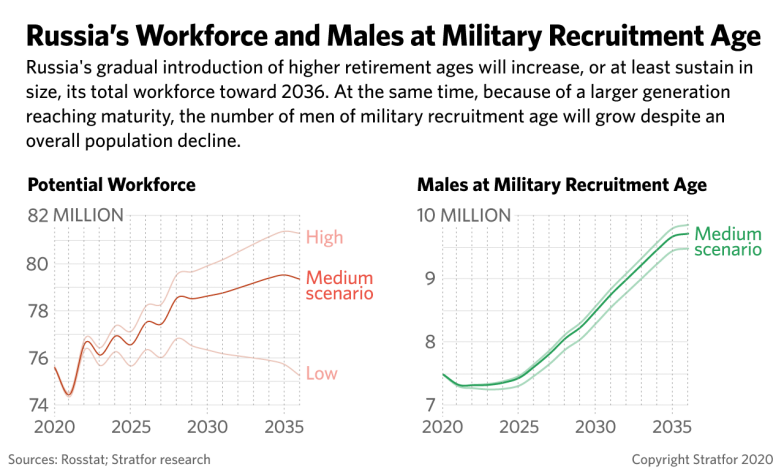 Russia’s population has long been projected to shrink in the coming decades due to high emigration and low birth rates. But recent projections forecast an even faster reduction than previously anticipated, raising new concerns over the severity of the country’s demographic decline and the potential impact on the Russian economy. For now, extended retirement ages and an upcoming boom of young workers will help Moscow temporarily manage the effects of its demographic decline — though that won’t keep Russia from hemorrhaging the high-quality workers needed to keep its economy chugging in the meantime.

Indeed, substantially improving the country’s population prospects will first require improving its economic prospects to the point where it either keeps Russians at home or attracts foreign workers. Otherwise, Russia will continue to edge ever closer to economic and political turmoil, as its deepening demographic crisis starts to significantly erode its labor force for potentially decades to come.

Calm Before the Storm?

At the end of last year, Russia’s national statistics office Rosstat released its latest population forecast. Overall, the report showed trendlines similar to the long-accepted realities of demographic decline in Russia. But the country’s population also dropped for the first time in a decade last year. Deaths outpace births at a record rate as well, marking Russia’s highest natural population decline in 11 years. These downward trends were coupled with lower-than-anticipated migration inflows and higher-than-anticipated immigration outflows in 2019. The most negative of the three scenarios in the Rosstat forecast shows a potential population drop of 12 million by 2036, as opposed to the 8 million drop forecasted just two years ago.

Despite Russia’s long-term projections of population decline, its labor force is actually expected to grow slightly, or at least remain at its current level, for the next 15 years. This counter intuitive growth will stem largely from Moscow’s 2018 decision to gradually extend retirement ages over the next decade. The current retirement ages for Russian men and women are 61 and 56, respectively. By 2028, Moscow will increase these ages to 65 and 60, respectively. Extending the duration of its citizens’ economic activity will help temporarily freeze Russia’s dependency ratio, or the gap between those participating in the labor force (adults) and those who aren’t (mostly children and seniors). It will also help reduce the strain on public spending by increasing the segment of the population from which it can derive income taxes while limiting the growth of those dependent on pensions.

A growing number of young people is expected to enter the workforce starting in 2024, which will also help maintain the size of Russia’s labor market in the coming years. In addition to the obvious economic benefits, this boost of youthful workers starting in around 2025 will limit the other effects of Russia’s demographic decline as well, such as difficulties in military recruitment. Russians between the draft-eligible ages of 18 and 27 currently make up one of the smaller segments of the country’s population, which has forced Moscow to downscale its ambitions for numbers for both conscripted and contracted military personnel in recent years. But by 2025, this age group is poised to start rising again as the next, larger generation of Russians reaches maturity.

Yet while this influx of younger people may help support both military recruitment and sustenance of the labor force in the short term, it won’t provide a permanent fix for Russia’s aging workforce. The productivity of workers is generally assumed to peak at around 40 years old before their output and inclination toward innovation progressively decline with age. Currently, the bulk of the Russian population and workforce is either right at or on the cusp of that peak, falling between the ages of 30 and 40. But as this generation grows older and works longer under the extended retirement age, and as a larger wave of younger people enters the workforce, there will be growing concentrations of workers under the age of 30 and over the age of 45 between now and 2036. The number of the most experienced and motivated workers in the middle, meanwhile, will begin to decrease as part of Russia’s returning 30-year cycle of expanding and contracting fertility rates following World War II. Russia’s population contracted massively during and directly after the war due to a combination of low birth rates and the sheer loss of lives in battle. This contraction between 1938 and 1945 then contributed to another contraction in the 1970s once this war-time generation began having children, which is still visible in the smaller segment of the population between the ages of 45 and 54. The birth rates of this already small generation were then further suppressed by a 1998 financial and political crisis, which hit right as they were coming of age and starting families. As a result, their children — who are now between the ages of 15 and 24 — make up a particularly small segment of the Russian population. And once this generation reaches prime working age in 2035, it will thus shrink the most productive segment of the workforce.

Given this reality, the Russian government could continue to push retirement ages back, though doing so would be wildly unpopular. Indeed, the latest hike sparked waves of protests after it was proposed in 2018, which led the Kremlin to limit the female retirement age to 60 instead of 63 as initially planned. But in addition to threatening political stability, such a move would also only further deteriorate the efficiency and quality of the Russian workforce by forcing older and less motivated Russians to remain employed for longer. 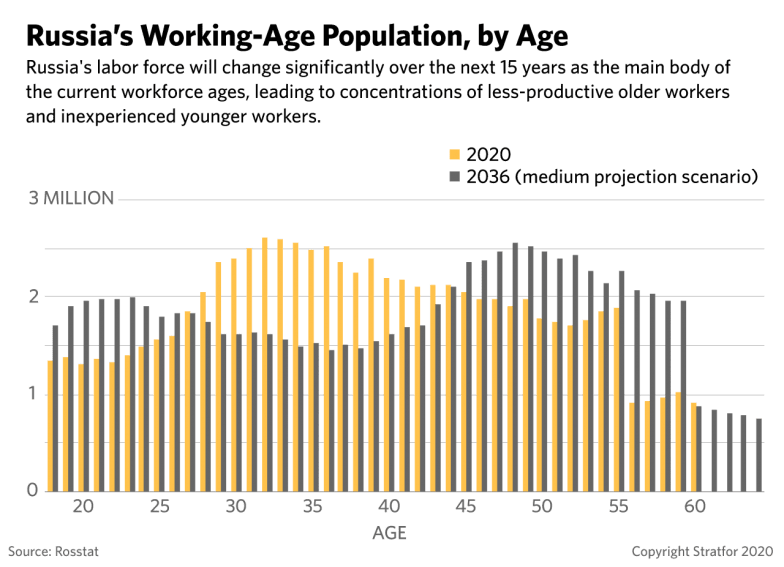 Mitigating the actual severity of Russia’s demographic decline will instead largely depend on the country’s economic performance in the coming years. Significant growth could not only entice more nearby foreigners to seek out new job opportunities in Russia, but also encourage more Russians to have children. On the flip side, however, continued economic stagnation or a recession risks exacerbating the plummeting migration numbers and low birth rates chipping away at Russia’s population. But given that neither demographic patterns nor other factors signal such an economic comeback in the coming decades, the latter scenario remains far more likely.

In the longer term, these demographic pressures will continue to build and impose extreme stress on the foundation of the Russian economy by severely restricting its potential for growth, as well as its resilience against other greater global threats and external shocks. Too weak to risk inviting more sanctions pressure or embargoes, Russia will find itself less able to sustain its adversarial posture toward the West. In the face of diminishing industrial capacity, the need to both insulate the Russian economy and build up financial reserves will also make collaborative economic relations — such as the one Moscow is currently developing with China — all the more crucial.

As Russia’s economy worsens, it will propel even more of its younger, more capable workers as well as would-be immigrants to establish their lives elsewhere.

But perhaps most importantly is the fact that these greater economic repercussions risk exacerbating the very drivers contributing to its labor woes by making the notion of working or starting a family in Russia all the more undesirable. As Russia’s economy worsens, it will propel even more of its younger, more capable workers — as well as would-be immigrants — to establish their lives elsewhere. Thus, barring an economic comeback that drastically changes its demographic fortunes, the spiraling population decline that has haunted Russia for decades will likely continue to haunt Russia for decades to come.