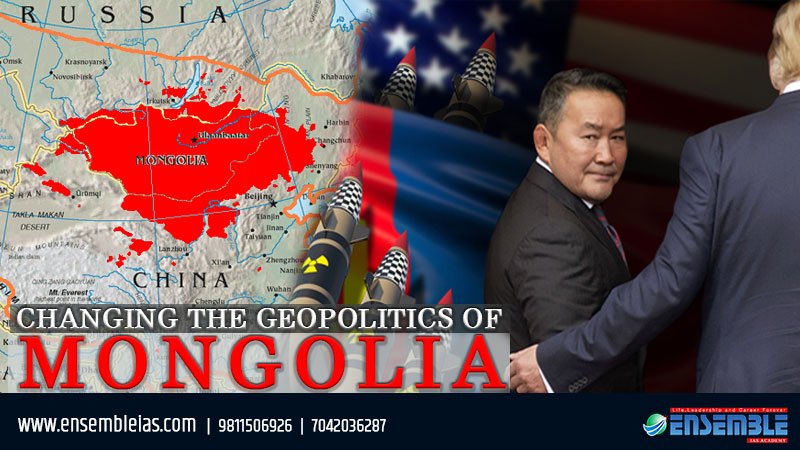 How Great Power Competition Is Changing the Geopolitics of Mongolia

Mongolia is in a uniquely precarious situation, geographically, demographically and economically. Landlocked and isolated in East Asia, it has the lowest population density of any sovereign nation in the world. Its 3 million people, in a country about the size of Alaska, are dwarfed by 133 million Russians to the north and 1.4 billion Chinese to the south. It also has one of the coldest climates in the world. While these factors greatly constrain Mongolia economically, it has the world’s best cashmere, huge ecological and cultural tourism potential and — most critically — an enormous mineral resource endowment.

Mongolia in the 20th Century

Mongolia has a proud cultural history dating to the founding of the Mongol Empire (1206-1368). Its later occupation by China’s Qing dynasty lasted from 1691 to 1911, when Mongolia deposed the local ruler and declared independence. The 1915 Treaty of Kyakhta briefly reestablished Chinese control, but Russia helped Mongolia finally expel the Chinese after the 1917 October Revolution.

The Soviet Red Army settled in, abolished the Mongolian monarchy in 1924, and used Mongolia as a buffer with China. Mongolia maintained good relations with both China and the Soviet Union until the Sino-Soviet schism of the 1950s. By 1968 the Soviets had six military divisions in Mongolia, which Russia kept there until December 1992.

After the Cold War

Russia’s departure left Mongolia facing two major problems. The most immediate was a severe economic crisis. Russia had accounted for 40 percent of Mongolia’s national income, all of its gasoline, 90 percent of its imported machinery and half of its consumer goods. As Russia withdrew, Mongolia’s economy effectively collapsed.

The second problem was existential. For the first time, Mongolia was truly on its own. Although Beijing recognized its independence in 1945, China by some accounts still harbors latent territorial designs on Mongolia. Some see Mongolia as part of China’s historical domain, and Mongolian elites are concerned that younger and more nationalistic Chinese could press for annexation. China’s history with Inner Mongolia, Tibet, Hong Kong and Taiwan — as well as Mongolia itself — isn’t reassuring.

Because of this, protecting its sovereignty and preserving its independence is Mongolia’s top priority. Its strategy has been to walk a geopolitical tightrope tethered by two policies: a “good neighbor” policy with Russia and China, and a “third neighbor” policy to build ties to other countries — especially the United States, Japan, South Korea, India, Germany, the United Kingdom, Australia and Canada.

In the three-dimensional chess game of Mongolian geopolitics, great power competition is now changing the calculus on Mongolian sovereignty.

After the Cold War, rooted in Francis Fukuyama’s idea that the end of history was nigh, there was great initial enthusiasm for a lasting new liberal international order. That notion proved both illusory and short-lived. By 2014 great power competition had fully reemerged, bringing with it a fundamental shift in the international security environment. In the three-dimensional chess game of Mongolian geopolitics, great power competition is now changing the calculus on Mongolian sovereignty.

The most visible feature of great power competition is China’s emergent regional and global hegemony. It relies on using big infrastructure as leverage, built in countries of strategic importance through its Belt and Road Initiative.

One of the initiative’s six transnational corridors would connect China to Eastern Europe via Mongolia and Russia. That would open new mineral export markets for Mongolia and help it develop as a regional logistics hub. China appears to be slow-rolling the project, however, even as it rapidly builds expensive infrastructure around the globe.

Economic leverage is a potent tool of Chinese foreign policy. In 2016 it slapped import tariffs on Mongolian goods as punishment for the Dalai Lama’s visit. With China now weaponizing its 80 percent share of global rare earth production, the geopolitics surrounding Mongolia’s rare earth deposits are likely to heat up.

Perhaps the most consequential impact on Mongolia derives from the new political, economic and military alliance formed by Russia and China to counter the United States. As the Sino-Russian alliance strengthens, Mongolia’s value as a buffer state will weaken.

Moscow, however, still sees China as a potential long-term threat. Balancing China’s influence in Mongolia is a priority, and Russia is attempting to rebuild and strengthen its economic ties there. It supplies about 80 percent of Mongolia’s oil market, and trade has grown nearly 40 percent since 2017. In 2019 the two countries announced a strategic partnership that includes a $1.5 billion infrastructure investment fund, an upgrade of the trans-Mongolian railway and possible routing through Mongolia of a Russia-China natural gas pipeline.

Russia worries that if its 3,485-kilometer (2,165-mile) border with Mongolia falls under Chinese control, its Siberian underbelly would be exposed. Meanwhile, Russian territorial issues elsewhere concern Mongolia because of their potential to strengthen Chinese arguments for reoccupation. These include Russia’s annexation of Crimea in 2014 and its negotiations with Japan over the Kuril Islands.

While Mongolia’s location is strategically important, the United States has broader interests in the country. These include commerce, democracy, security, nonproliferation, trade, investment, sovereignty, the rule of law, peacekeeping and North Korea. What the United States most wants, however, is to see Mongolia remain a sovereign and independent state — one that is successful, prosperous and plays a constructive role in the region and beyond.

The U.S. national defense and security strategies — both constructed around great power competition — are opening doors for bilateral and regional cooperation that can strengthen Mongolia’s geopolitical hand.

The significance of democracy in U.S. foreign policy has arguably declined. But the U.S. national defense and security strategies — both constructed around great power competition — are opening doors for bilateral and regional cooperation that can strengthen Mongolia’s geopolitical hand. These include the U.S. emphasis on Russia and China, the U.S. pivot to the Indo-Pacific and U.S. outreach to North Korea — where Mongolia is positioned well to facilitate peace negotiations.

Ultimately, the final guarantor of Mongolian sovereignty remains Russia. It has a clear and enduring interest in an independent Mongolia, and its strategic control over Mongolia’s energy and transportation sectors would make it a formidable adversary in the event of future Chinese threats, be they economic, political or military.

Mongolia under President Khaltmaa Battulga is deepening that relationship, but it also needs to strengthen the threat of hard global pushback from multiple directions should an aggressive China ever decide to move on it. To do that, Mongolia needs to deepen its strategic alliances with select allies, and build regional bridges in peace and security in the Indo-Pacific.

At the geographical nexus of great power competition, Mongolia has its work cut out for it.