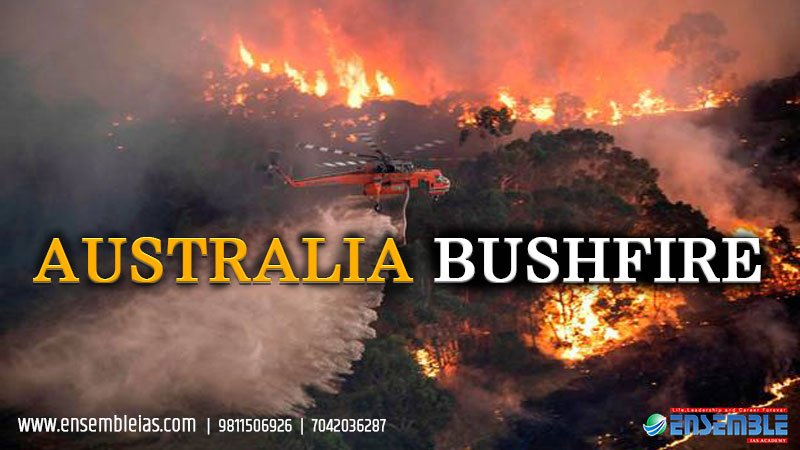 Australia Bushfire: What role did the delayed retreat of the Indian monsoon play on the climate of the southern continent?

The story so far: Australia bushfire have razed more than 10.3 million hectares (103,300 sq km) of land — roughly the size of South Korea — since September. News agencies reported that 27 people and up to a billion animals have been killed and thousands subjected to repeat evacuations as the unpredictable fires spread over large areas in the east and south-east. An extended weather reported in one country (wet monsoon in India) appears to have translated into an unmitigated disaster half a world away for another (delayed monsoon, dryness, drought and wildfires in Australia.

Why did Australia suffer from drought?

Playing out to the north and south of the equator, the progression of monsoon winds more or less corresponds to the natural occurrence of troughs and ridges in the same pressure field as seen on the weathermap. The 2019 June-September monsoon in India started its withdrawal on October 9, against the normal date of September 1, making it the most delayed in recorded history. It was also the strongest in recent years with a surplus of 10% in 2019 — both attributed in part due to the positive phase of the Indian Ocean Dipole (IOD). During a positive IOD phase, the west Indian Ocean warms up anomalously (creating lower pressure and wet climes) relative to the east (higher pressure and a dry phase, towards the Australian side).

Climate models had indicated that the positive IOD may persist longer than typical events do — active right from May 2019 before peaking in October-November and decaying only during the first week of January 2020. In this manner, a positive IOD that persisted longer than usual is thought to have contributed to a delay in transition of the monsoon trough from the Northern Hemisphere to the Southern Hemisphere and onset of the Australian monsoon.

The IOD breakdown occurs when the monsoon trough moves into the southern hemisphere in early December (this is when the North-east monsoon in India draws to a close).

What followed the delay of rain?

The resulting drought and heat have seen Australia grapple with fire over many parts of the country from September. New South Wales (NSW), the country’s most populated state, alone reported loss of more than 2,000 homes and over 650 damaged. The south-eastern state of NSW alone saw more than 4.9 million hectares being scorched. No single Australian state seems to have escaped the wrath of ravenous fires, but none more deadly than in NSW. A plume of smoke has drifted from Down Under across the South Pacific Ocean, reaching Buenos Aires, thousands of kilometres away.

The number of total animals affected could be as high as one billion nationwide, and that is at best a conservative guess. The persistent heat and drought buttressed by the positive IOD conditions may have acted as a perfect foil for the tinder-like conditions, with climate change scientists and naysayers pitched on either side of a towering inferno, arguing their respective cases of what might have triggered the devastation. Timely arrival of the monsoon rains could have helped the federal and state governments contain the spread of the fires but its delay past the normal December-end timeline seem to have let them down badly.

Is it due to climate change?

Scientists and researchers see an indelible stamp of climate change etched on the conflagration. In recent years, Australia has experienced longer dry conditions and exceptionally low rainfall. On the other side, climate change naysayers have been quick to point out at other triggers; for instance, one of the strongest IOD events ever on record. Claims that a big wave of arson may have fuelled the raging bushfires also have gone viral on social media, with U.S. President Donald Trump leading in the front. But the NSW Police have clarified that only 24 people are currently facing criminal charges for deliberately igniting fires and even fewer have actually managed to start large fires. There are close to 150 different fires burning across NSW even as this is being written. Commentators fear that the mindless politicisation of climate change may have given enough cannon fodder for lot of misinformation on social media.

Why does it matter?

Experts say climate change has worsened the scope and impact of natural disasterssuch as fires and floods. Weather conditions are growing more extreme, and for years, the fires have been starting earlier in the season and spreading with greater intensity. South-east Australia has been abnormally dry since September under prevailing positive IOD conditions, which means that it would need bouts of significant rainfall to have an impact on the fire risk. Although the region experienced some rain early this week, it is not enough. Given this, the risk of additional fires remains high.

Early in January, the State of Victoria had declared a state of disaster and NSW a state of emergency. The State of Queensland also briefly declared a state of emergency in November. There are currently more than 2,000 firefighters working on the ground in NSW alone, and more support is on the way with the U.S., Canada, and New Zealand promising to despatch additional firefighters. But unfortunately, Australia is only just entering its summer season.

Typically, a “positive IOD brings below-average winter-spring rainfall to southern and central Australia, with warmer days for the southern two-thirds of the country. Positive IOD events are often associated with a more severe fire season for South-east Australia. Natural causes are known to light up the fires most of the time, such as lightning strikes in drought-affected forests. Dry lightning was responsible for starting a number of fires in Victoria’s East Gippsland region in late December, which then travelled more than 20 km in just five hours, according to State agency Victoria Emergency. The fire season in Australia is always dangerous, with the 2009 Black Saturday fires killing 173 people in Victoria, making it the deadliest bushfire disaster on record. But conditions have been unusually severe this year, fanning the flames and making firefighting difficult. Australia is also experiencing one of its worst droughts in decades. The Bureau of Meteorology said in December that last spring was the driest on record. Meanwhile, a heatwave in December broke the record for highest nationwide average temperature, with some places sweltering under temperatures well above 40º Celsius. Strong winds have also made the fires and smoke spread more rapidly, and have led to fatalities. Normally, temperatures peak in January and February”, meaning the country could be months away from finding relief.