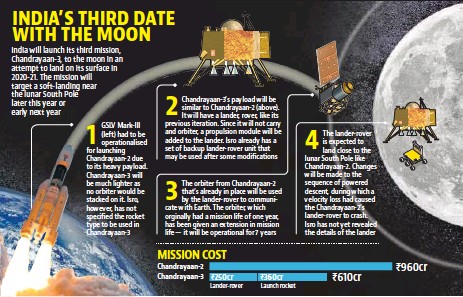 India will launch its third mission, Chandrayaan-3, to the moon in an attempt to land on its surface in 2020-21. The mission will target a soft-landing near the lunar South Pole later this year or early next year.

GSLV MARK-III (left) had to be operationalised for launching Chandrayaan-2 due to its heavy payload. Chandrayaan-3 will be much lighter as no orbiter would be stacked on it. Isro, however, has not specified the rocket type to be used in Chandrayaan-3

Chandrayaan-3’s payload will be similar to Chandrayaan-2 (above). It will have a lander, rover, like its previous iteration. Since it will not carry and orbiter, a propulsion module will be added to the lander. Isro already has a set of backup lander-rover unit that may be used after some modifications

The orbiter from Chandrayaan-2 that’s already in place will be used by the lander-rover to communicate with Earth. The orbiter, which originally had a mission life of one year, has been given an extension in mission life — it will be operational for 7 years.

The lander-rover is expected to land close to the lunar South Pole like Chandrayaan-2. Changes will be made to the sequence of powered descent, during which a velocity loss had caused the Chandrayaan-2’s lander-rover to crash. Isro has not yet revealed the details of the lander.