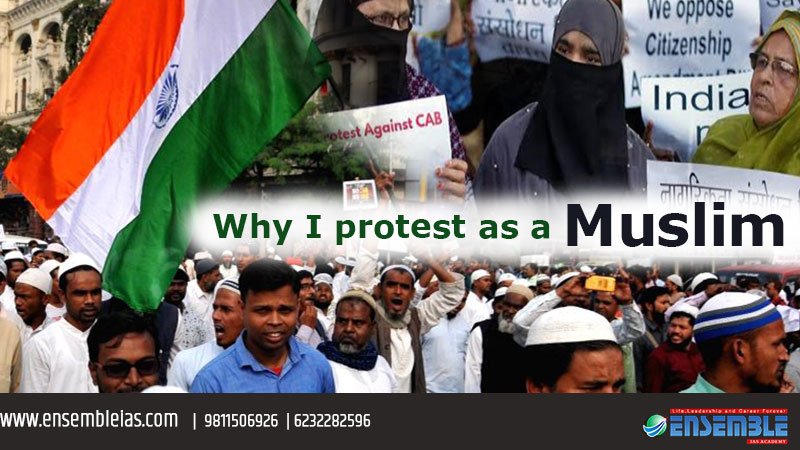 Why I protest as a Muslim: If the state bullies me because of my faith, I shall publicly assert it.

When I protested against the Citizenship Amendment Act at Parivartan Chowk in Lucknow on December 19, I did not protest just against the legislation. That was the obvious, immediate protest.

Why did Muslims take so long to feel “enough is enough”?

In Modi’s first term as prime minister, the anti-Muslim agenda was played out strategically, one that averted a collective protest. Individual Muslims were lynched frequently, but in different states and at different points of time. No collective action was taken at one point of time against the entire Muslim community. The state’s attack on Muslims was indirect, executed through ragtag cow “vigilantes”, WhatsApp myths and shrill TV discussions on “why don’t Muslims chant Bharat Mata ki jai?” or “why does AMU have a Jinnah portrait?” or “what is love jihad?”

Designed to intimidate Muslims, the state’s confrontation was successful, as few Muslims protested in the BJP’s first term. Those like me, who did, merged invisibly into multi-religious crowds, ineffectually chanting “Not In My Name”. The inability to protest as one large, visible unit came across as “weak submission”. Among ourselves, we said it was “better to be wise than to be bold”. Wisdom meant not actively resisting the confrontation, quietly going about our work, and building each other up economically.

In its second term, beginning May 23, 2019, however, the government began upgrading the anti-Muslim narrative to law. In July, the Triple Talaq Bill was passed, threatening to imprison Muslim men for instantaneously divorcing their wives. In August, Article 370 was abrogated, locking down Muslim-majority Kashmir indefinitely. In December, a month after the SC announced its verdict in the Ayodhya title suit, the Citizenship Amendment Bill became law. Along with the NRC, it threatens to strip Muslims of their citizenship.

When agenda is written into law, the “wisdom” of not resisting won’t save you. When you are pushed to the wall, you can’t be pushed further. You must rise back. So, after six years of patience despite repeated provocations, Muslims began rallying across cities in large numbers, holding placards against CAA-NRC. The protests allegedly turned “violent” in BJP-ruled UP and Karnataka, giving an excuse to the police to crack down on protesters. The fear of such a crackdown was the precise reason for Muslims not protesting in Modi’s first term. But one has to rise above fear, and sadly, pay the price for active resistance.

Many non-Muslims, too, are participating in the active resistance and calling for “azaadi” from Hindutva. Some, though, have expressed discomfort with Muslim protestors chanting distinctly Islamic slogans like “Allahu Akbar” (God is Great) and “La ilaha illallah” (There is no God but Allah). Shashi Tharoor, for example, tweeted: “.You can’t fight Hindutva communalism by promoting Muslim communalism. Identity politics will destroy India.”

If Muslims are asserting their religious identity with their religious slogans, it is because they have been targeted on account of their religion. If the state wants to bully me because of my faith, I will only publicly assert it. Hannah Arendt, the Jewish political philosopher who fled Nazi Germany in the 1930s, wrote, “If one is attacked as a Jew, one must defend oneself as a Jew. Not as a German, not as a world-citizen, not as an upholder of the Rights of Man.” A democracy allows you to protest from your standpoint. An unaffected majority can protest solely as an Indian. An affected minority has the right to protest as an Indian and as a minority.

At a small protest in Lucknow, on December 16, I was stopped from chanting “Allahu Akbar” and told, “The issue is about India, not religion.” I walked out after being denied the right to protest as a Muslim. Some argue that religious slogans play into the government’s agenda and harm the “idea of India”. Why should Muslims always strategise to uphold the “idea of India”, be it during protests or during polls (“vote to keep fascists at bay”)? Instead of asking Muslims to “secularise” protests, non-Muslims can carry “I am Muslim” placards, like the Whites did in the US against Trump’s “Muslim ban” in 2017. The onus of saving India from majoritarianism is on the majority, not on minorities.

Some ordinary Hindus have commendably taken up that responsibility. Indulekha Parthan, a law student in Ernakulam, and Prabha Raj, a social media influencer in Chennai, for example, wore hijabs at anti-CAA rallies to protest against Modi’s “recognise the protesters by their clothes” remark. The burkha and the hijab, being markers of Muslim identity, have become symbols of the anti-CAA protests. Many Muslim women, who don’t wear the hijab, donned it for the protests to assert their identity. I did so too, as I wanted to be “recognised by my clothes”. Since then, I have been wearing the hijab at public spaces. The state wants to target me for being Muslim? I shall be “too Muslim” for its comfort.