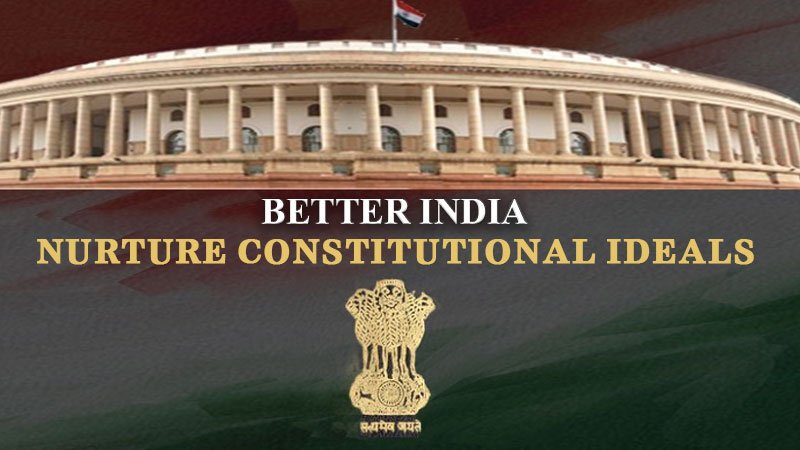 Constitutional: Democracy,federalism,equality, pluralism, and justice are India’s foundation principles. They must be preserved and deepened.

When India marked the 70th anniversary of the Constituent Assembly ratifying the Constitution last week, it was a moment to reflect on all that the country has achieved.

The founders took the bold step of introducing universal adult franchise and trusting and empowering Indian citizens to choose their representatives. This democratic structure persists till today. It has only got deeper, with the marginalised segments of the population finding a voice in the polling booths. It ensures a government which has to be accountable to Parliament, and to the larger public. It legitimises power, but also serves as a check on it.

Indian federalism was yet another gift of the Constitution, though it did not use the term, and instead called India a “Union of States”. Scholars described it as a “quasi-federal” system, for the power balance was tilted in favour of the Centre. But over the decades, as regional aspirations grew, regional parties emerged, and grassroots political mobilisation deepened, India assumed a truly federal character.

The Constitution’s third gift was the idea of a plural, diverse society where the State would not discriminate between citizens on the basis of religion, caste, gender, or class. The idea of equality and the principle of State neutrality in matters of faith remains a key reason for Indian unity.

And finally, the principle of socioeconomic justice was central to the idea of the Constitution. How could it be otherwise? India was poor; citizens lacked basic amenities; the caste system had trapped individuals in a brutal, hierarchical order where the routes for upward mobility were blocked; there was widespread illiteracy. India adopted a progressive outlook, where the State took on the responsibility of lifting millions out of poverty.

These key tenets of the Constitution — democracy, federalism, equality, pluralism, justice — have sustained India. They also provide a template for conversations about building a better tomorrow, the theme of this year’s Hindustan Times Leadership Summit.

Every election in India shows how deeply robust democracy is. A glance at Parliamentary proceedings shows the vibrancy of political debates. The judiciary’s role in checking the excesses of the political executive is an important element of democracy. The noisy, often chaotic, public sphere — from social media to everyday tea-shop conversations in villages — shows an aware and engaged citizenry. These are all good signs. At the same time, democracy has to be carefully preserved and nurtured. For the future, it is important that there remains a strong Opposition, that institutions remain autonomous, that free speech (subject to reasonable restrictions stipulated in the Constitution) remains sacrosanct, and that the government functions within the bounds of law. India is, to reiterate, more federal than ever before. Real power is often exercised at the level of the states, and even below, at the level of the panchayati raj institutions. Recent elections have shown that voters carefully, and often differently, vote in national and state elections. Local concerns, local alliances at the local level are critical if a party wants to succeed. At the same time, for the future, it is important to maintain this careful equilibrium between the Centre and states, be it in terms of taking into account the concerns of the regions on political issues, finances, and equitable development.

India has made tremendous strides in becoming a more just society. There have been achievements in terms of education; many have moved beyond caste-ordained professions; the remotest villages now have access to basic facilities; incomes have grown; aspirations have blossomed; citizens are better connected and more well-informed; economic reforms over the past three decades have seen an unprecedented expansion in opportunities; urbanisation and migration have provided paths of upward mobility; and government welfare schemes have begun delivering benefits on the ground. For the future, India needs to return to a high-growth trajectory, for that is the only route to battle poverty and provide jobs. It needs to boost manufacturing and investment. It needs to continue providing welfare to the most needy citizens, so that they are equipped with the tools required to access opportunities. It needs to continue battling caste-based injustices and atrocities. And it needs to provide better public education and health on a war footing.

India has achieved a lot. But it has a long way to go before truly meeting all the ideals of the founders. Fortunately, there is a framework to create a better tomorrow, a framework provided by the Constitution itself. A more democratic, a more federal, a more equal, a more just, and a more tolerant India is possible.