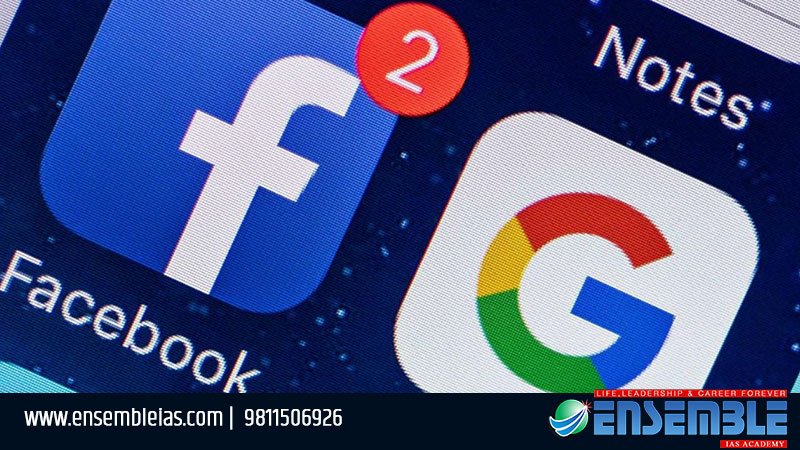 Google Facebook : As the world’s largest democracy, as its second-largest online market, as a soon-to-become fastest growing major economy, India should have taken the lead on making Google and Facebook – two alarmingly dominant global super-monopolies – pay a fair share of earnings they make from domestically produced news content on the internet.

Even more so because, first, India’s government has demonstrated it is perfectly willing to take on Big Tech on multiple other fronts and, second, it has made atmanirbharata (self-reliance) its economic policy mantra. A large democracy with growing internet market power run by a government that champions local enterprise and can get tough on global players is just about the perfect candidate to be a key player in this fight.

But it was Australia that took the lead. A law that’s almost certain to be passed by its parliament will impose payment obligations on Big Tech. And Australian PM Scott Morrison was entirely right to call for a global alliance of democracies to make Google and Facebook pay much more for news content they profit from.

Some other democracies have taken a few steps or half steps. Led by France, European countries have started making rules and launched investigations. Discussions on remedial action are gathering momentum in the US. So far, there’s nothing in India. Even though, nothing could be clearer than the case for making Big Tech cough up more money to democratic India’s news content publishers. Let’s explain it simply, point by point:

Now think of a scenario where Google and Facebook are by law or regulation obliged to pay a fair share of earnings from digital distribution of news. This is what will happen:

This is the premise Australia’s proposed law is based on. Its government wants the news publishing business to be financially viable because it knows Australian democracy needs a viable Australian news media. That’s why France and the UK, Germany and Spain have started taking on Big Tech. And this is why India’s government must act, too.

And India has one advantage as a late starter. It can see that concerted government action can unbend global super-monopolies. In Australia, Google is making deals with individual publishers. Facebook, after a petty blackout of news, is seeking to renegotiate. And variations of the Australian law are a looming threat both tech giants now face across democracies.

India can – and must – start acting on its own version of a law or an appropriate set of regulations. And once it does, because of its current market size and future market potential, there’s no way Google and Facebook can simply ignore what’s being done here.

How can the government start the process? There are several options. The Competition Commission of India can start a suo motu investigation. Or the information and broadcasting ministry can be the agency that kickstarts the process. For example, it can call for, say, a 45-day consultation period asking for inputs from all stakeholders. And then set a time frame for drafting a bill, as Australia did.

Some experts suggest the government can down the line set up a new digital agency to tackle all complex issues, including those involving news publishing, arising out of dominance of Big Tech. Others suggest looking at the Copyright Act for options on imposing licensing fee for content, roughly the route France has taken.

Therefore, there’s plenty the government can do, and do quickly. The global environment has finally turned. Big Tech is on notice in other democracies for destroying the viability of independent journalism. It must be on notice in India, too. An atmanirbhar India needs an atmanirbhar news industry.