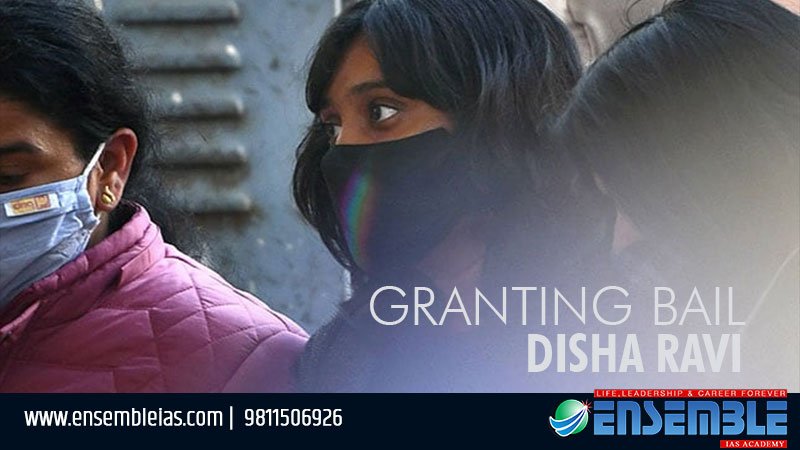 While granting bail to 22-year-old Bengaluru activist Disha Ravi, Judge Dharmender Rana asked questions and drew distinctions that are vital to a constitutional democracy. In the process, the Delhi trial court judge underscored the judiciary’s special responsibility, including and especially in cases involving the protection of the citizen’s freedom of expression against arbitrary state action. “The nub of the issue”, said Judge Rana, “is whether applicant/accused Disha was merely involved in peaceful protest and dissent against the farm acts or she was actually involved in seditious activities under the guise of protesting against the said legislation”. The evidence on offer against the activist arrested by Delhi Police in connection with a Toolkit on the farmers’ protest that was tweeted by Swedish campaigner Greta Thunberg, he said, did not amount to sedition under Section 124A — exciting or the attempt to excite disaffection towards a government established by law. Nor the offence defined by Section 153A — promoting enmity between different groups on grounds of religion, race etc. Judge Rana remained unmoved and unpersuaded by the prosecution’s attempt to substitute the missing evidence of direct incitement or link to violence — which the apex court has held to be necessary to the sedition charge — by an allegation of “larger conspiracy”. Because: “… what is difficult to prove for the prosecution in the affirmative is virtually impossible for the defence to prove in the negative”.

In times when the state disquietingly, and frequently, seeks to criminalise dissent by slapping Section 124A and/or Section 153A against the dissenter, and when the spectre of a “conspiracy” — as sinister as it is unsubstantiated and unsubstantiatable — is all too often invoked to tar and taint protests against the government, the Delhi trial court ruling is necessary reading for all courts. It raises the bar, or rather, restates the bar, for the state to move against the citizen’s freedom to disagree. Judge Rana quotes previous judgements of the Supreme Court and the High Courts. The SC in Kedar Nath v State of Bihar 1962, and the Punjab and Haryana High Court in Balbir Singh Saina v State of Haryana 1989, laid down the centrality of violence in sedition. The Mumbai High Court in the matter of Arun G Gowli v State of Maharashtra 1998, observed that conspiracy cannot be proved merely on the basis of inferences that are not backed by evidence. Judge Rana quotes the higher courts to make the basic point that is in danger of being lost sight of by the higher courts: That the right to dissent is firmly enshrined under Article 19 of the Constitution. He goes further, saying that “the freedom of speech and expression includes the right to seek a global audience”.

In a ruling that is as reasoned as it is compassionate, as grounded in first principles of justice as it is in the higher judiciary’s own illustrious legacy, Judge Rana sets a benchmark. The next time a government wants to come down on the dissenting or protesting citizen, the next time it weaponises a harsh section of the IPC, and gets the police to do its bidding, State vs Disha A Ravi should be a compass. One hopes it will be.