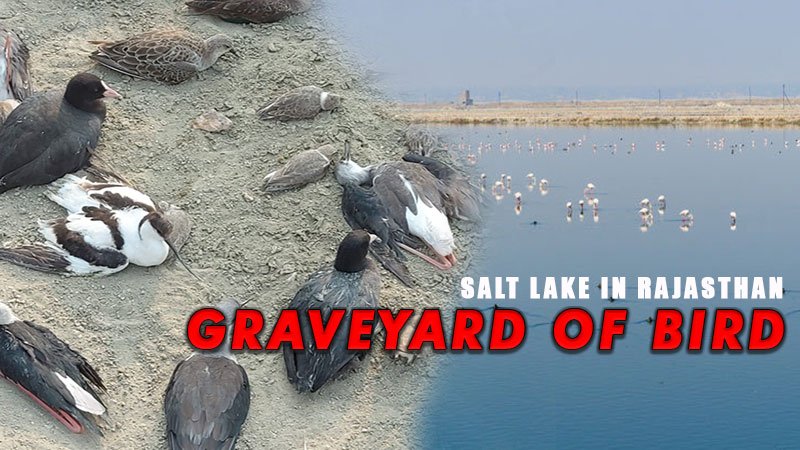 Graveyard of Birds Salt Lake: As Tests Confirm The Presence Of A Toxin, Experts Say Worst May Not Be Over With More Migratory Birds Headed To Sambhar In Coming Months.

One moment they seemed to have covered the sky, and in the next, the ground. Thousands of migratory birds — from the green winged teal to the long-necked northern pintail — that cut through countries and continents to wing their way to Sambhar Lake in Rajasthan every winter had suddenly died, their bodies piled up on the sandy shores.

In just 10 days, more than 18,000 carcasses have been found, turning the inland salt lake into the site of India’s largest recorded mass dying of birds. Ironically, an above-normal monsoon this year has attracted an even higher avian number. What would have been a birdwatcher’s delight has turned into a tragedy that has shocked ornithologists and common people alike. It is estimated that currently there are about 1.5 lakh birds at the lake.

While the Indian Veterinary Research Institute (IVRI) in Bareilly, UP, has now sent a report to Rajasthan CM Ashok Gehlot confirming avian botulism — a neuromuscular illness caused by a toxin produced by the bacterium Clostridium botulinum — as the cause of death, it remains a concern that the disaster shows no signs of abating. On Wednesday, 430 birds were reported dead.

Birds of as many as 28 species, including the eastern imperial eagle, classified as vulnerable by the International Union for Conservation of Nature (IUCN), and others like the northern shoveler, common redshank and little stint, have been found dead.

As both migratory and resident birds continue to perish, experts are still divided over what lies at the bottom of the deaths. If there is unanimity on one thing, it is that unless something is done quickly, more birds may be at risk. An estimated one lakh-plus migratory birds visit Sambhar Lake from mid-September to the end of February. “This was just the first set of migratory birds. The administration needs to take preventive measures at the earliest because more migratory birds from colder climates are expected to arrive soon,” said Babulal Jaju, state coordinator, People for Animals (PFA).

While a battery of tests were performed at IVRI, the Wildlife Institute of India (WII), Dehradun, Salim Ali Centre for Ornithology and Natural History (SACON), Coimbatore are still carrying out tests. These institutions are expected to submit their report to the Rajasthan high court on November 22.

As of now, two probable causes have surfaced — bacterial infection and salt. Many of the birds were found paralysed, which indicates that they may have been infected by botulism, recognised as a major cause of mortality in wild birds.

Botulism spores, the resting stage of the bacteria, are found in the soil, wetlands, lakes and in fish living therein. They can remain dormant, even for years, until environmental factors — such as warm water, lack of oxygen or decaying plants or algae — allow them to produce bacterial cells, leading to an outbreak. Fish-eating birds that die of botulism are poisoned by fish that contain the toxin. Ingestion of maggots from the carcass of an infected animal can aid the spread of avian botulism.

This idea is supported by Bikaner Based microbiologist Dr AK Kataria, who conducted an autopsy of the birds. It may somewhat explain another puzzling factor — several species have been dying, but flamingos in the lake have been largely unaffected. Kataria has an explanation.

“Flamingos, which do not feed on maggots or meat, are not dying,” he said.

Other experts are of the opinion that the lake’s excessively salty water may be behind the deaths. Environmentalist Harsh Vardhan said, “The lake didn’t have enough water for the past few years, which could have led to accumulation of salt in large quantities. But this year, due to good rainfall, the concentrated saltwater could have turned toxic. Excessive salt in water can lead to hypernatremia.”

Not really knowing what’s leading to the deaths is hampering steps that can be taken to stop such occurrences in the future. Jagroop Singh Yadav, district collector, Jaipur, told TOI that since the cause of death “seems” to be avian botulism, the focus is on cleaning the carcasses. “The bacteria multiplies when it feeds on protein. To limit spread, we are removing carcasses immediately. The number of daily deaths has come down now.”

But carcass removal is only a tiny part of managing the outbreak. Generally, in case of avian botulism, the entire wetland has to be dried or flooded to change environmental conditions conducive to production of toxins. Experts said the grim episode has once again forced us to ask if enough is being done to prevent habitat loss. Sambhar Lake was awarded the ‘Wetland of International Importance’ tag by the Ramsar Convention on Wetlands in 1990 — but no efforts have been taken towards its conservation. It’s only this week that CM Gehlot ordered the setting up of a state-level wetland authority for conservation of the area and its flora and fauna.

Source : The Times of India | Written by : Ajaysingh.ugras