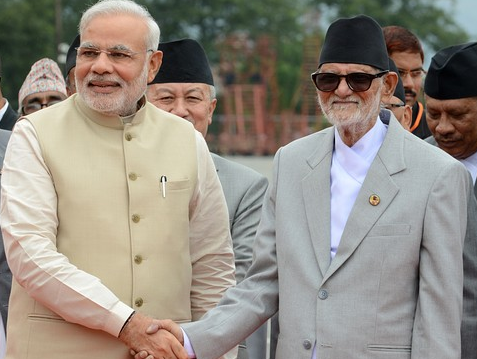 A s a unique characteristic, Nepal’s internal political fundamentals continue to shape its forgive policy choices. In the process, what gets lost is the scope of pursuing ‘enlighted self-interest’. In such a scenario, any inbound or outbound delegation is seen from a deferent prism, and anything discussed or not equally gives ample space to interpretation and misinterpretation. The year 2020 marked China’sunprecedented aggression, with an aim to counter India’s conventional edge in Nepal and South Asia at large. Accordingly, China’s geostrategic, economic and infrastructural drives were made tempting to a precarious Nepal with its fragile democracy and the adulterated ideological standing of the ruling communist party of  Nepal(CPN).

The CPN is a divided house, and publicly, this was known when Nepal’s Prime Minister K.P. Sharma Oli dissolved the House of Representatives in late December 2020. The move was termed ‘unconstitutional’ by the experts and the Country’s Supreme Court is hearing writ petitions against Mr. Oli. In fact, the Court has called for ‘Serious constitutional interpretation’. This merits to be seen even as a moral denial of the oil government’s stature as a caretaker government.

Amidst the domestic political chaos, the Minister for Foreign Affairs Of Nepal, Pradeep Kumar Ghazali (picture), visited New Delhi for the sixth meeting of the India-Nepal Joint Commission on January.

The keenly awaited meeting proved to be more focused on confidence-building measures such as exchanges of courteous remarks on significant and concrete progress made since the last meeting of the joint commission in taking forward several bilateral initiatives, and the close cooperation between the two sides in combating the COVID-19 pandemic. An early provision of vaccines to Nepal was positively  considered by India. On the development part-heirship front, the expansion of the Motihari-Amlekhganj petroleum products pipeline to Chitwan and the establishment of a new pipeline on the eastern side connecting Siliguri to Thapa in Nepal formed a part of the discussions. For the upgraded first passenger railway line between India and Nepal from Jayanagar to Kurta via Janakpur, the elusive operating procedures for commencement of train services have been discussed. Other “Cross-border rail connectivity project, including a possible Raxaul-Kathmandu broad gauge railway line”, were also  discussed.

The Joint Commission laid emphasis on the need for facilitating cross-border movement of people and good, thus giving the sub-re-gional cooperation, its actual due. The recently inaugurated Integrated Check Post(ICPs) at Birgunj and Biratnagar have helped in the seamless movement of people and trade between the two countries. The construction of a third integrated check post at Nepalgunj has already commenced, while the new integrated check post at Bhairahwa would begin shortly. Since Nepal relies on India’s seaports in a big way for trading, and goods are transported by road, the  integrated check posts are expected to ease trade and transit.

The joint hydropower projects, including the proposed Pancheshwar Multipurpose Project, should get positive momentum following this round of meeting. India’s support to two more cultural heritage projects in Nepal, namely, the Pashupatinath Riverfront Development and the bhandarkhal Garden Restoration in Patna Durbar is significant in the times when China is exploring all avenues to disrupt Nepal’s natural choice in policymaking. Moving away from the recent hiatus, Nepal expressed support for India’s permanent membership of an expanded UN Security Council (UNSC) to reflect the change balance of power. The next meeting of the Joint Commission in Nepal should be crucial in giving a new direction to the bilateral ties, keeping a balance between change and continuity.

Notwithstanding the Nepali side’s demand to include the boundary in the Joint  Commission Meeting, India made it clear to find a fresh mechanism to resolve any such crucial long- pending issue. Apparently, this was not something surprising, however, as Kathmandu had seen certain signals about this. The growing disenchantment among the Nepali masses over the increased centralization of power, failure of the Provincial System in addressing the developmental issues, misuse of Presidential authority by Nepal’s President Bidya Devi Bhandari, and unprecedented corruption provide ample room for a re-setting of Nepal’s democracy. Worryingly, a large section of the people want the ‘Cultural Monarchy’ back to substitute the Presidential system and a re-establishment of certain traditional way to governance. While the unusual developments are taking place in  Nepal, there are many who still think that India is comfortable with some changes as its Nepal policy is heading very clearly towards deeper engagement  with all sections.

The timing of the high-profile visit was strategically important as in the last few months, as Mr. Oli had categorically placed conditions before engaging with India at the top decision-making level. With a possibility of surviving the self-created political stalemate feeble, Mr. Oli is believed to be receptive towards unexpected changes. This is not something unfounded as one of the key centres of the pro-monarchy agitation is his constituency in eastern Nepal, Thapa. In the time of transition, his outreach to India is being seen in such contexts. A great survivor so far, he is believed to be open to gaining a new ground of support from different quarters including India. His China connection has been artificial and failed him at times, and he knows this better than anyone else. It is equally true that he has failed China too at times; by breaking even the cosmetic ‘Communist Unity’ in Nepal, he has finally made China’s hyper-interventionism a wasted effort.

Democracy in Nepal is achieved, not ascribed, and Nepal and its people deserve a better deal than what has been offered by the Oli-Bhandari duo. Like many other democracies across the world, Nepal’s democracy has been affected with an extreme rise in majoritarian sentiments. Nepal cannot afford to enter in another round of political instability, and those who have commanding authority to spearhead India-Nepal bilateral relations must give a humane consideration to it. At the crossroads, Nepal needs action and to come to term with realities.