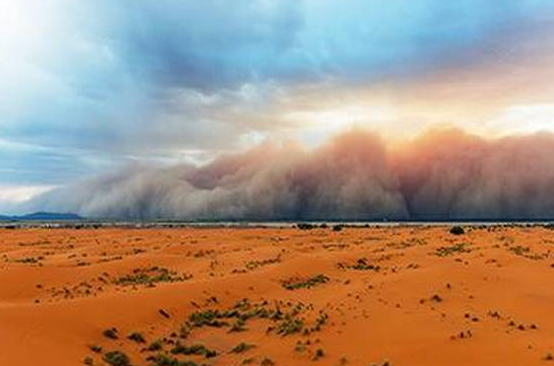 Carl Sagan once described Earth as a ‘small speck of dust’, a seemingly insignificant tiny particle. But dust has incredible power: it is known to influence monsoons, hurricanes and even fertilize rainforests. A new study now details how dust coming from the deserts in the West, Central and East Asia plays an important role in the Indian Summer Monsoon.

The researchers also explain how the Indian Summer Monsoon has a reverse effect and can increase the winds in West Asia to produce yet more dust.

Dust swarms from the desert when lifted by strong winds can absorb solar radiation and become hot. This can cause heating of the atmosphere, change the air pressure, wind circulation patterns, influence moisture transport and increase precipitation and rainfall. A strong monsoon can also transport air to West Asia and again pick up a lot of dust. The researchers say this is a positive feedback loop.

Lead author Qinjian Jin, lecturer and academic program associate at the University of Kansas explains a new hypothesis formulated by the team to The Hindu. “Not just the dust from the Middle East [West Asia], we think the Iranian Plateau also influences the Indian Summer Monsoon. The hot air over the Iranian Plateau can heat the atmosphere over the plateau, strengthen the circulation over the deserts of the Arabian Peninsula and increase dust emission from the Middle East [West Asia].”

He explains how deserts across the globe play important roles in monsoons. “The dust aerosols from deserts in West China such as the Taklamakan desert and the Gobi Desert can be transported eastward to eastern China and can influence the East Asia summer monsoon. And in the southwest United States, we have some small deserts that influence the North African monsoon.”

When asked if anthropogenic dust from vehicles, mining, construction can influence monsoons, he explained: “Some studies have found that the anthropogenic aerosols emitted from the Indian subcontinent can decrease summer monsoon precipitation, while others found that absorbing aerosols such as dust can strengthen the monsoon circulation. However, in our study, we use the climate model to simulate the impact of anthropogenic aerosols on India and our results showed that they can strengthen Indian summer monsoon rainfall.” The findings were recently published in Earth-Science Reviews.

But why is it important to study dust? Many studies have shown that the dust emission scheme is extremely sensitive to climate change and the team writes that understanding these mechanisms and effects of dust will help understand our monsoon systems in the face of global climate change.

The team has now planned to study the mineral components of desert dust aerosols. “We used to think that dust from deserts across the globe will have the same components, but we now know that different deserts have different chemical compositions and this can influence the dust’s properties. For example, we think that dust from the Middle East [West Asia] has more absorbing ability of solar radiation than dust from North Africa and this difference in absorbing ability might influence monsoon systems,” adds Dr. Jin. “We have also planned to use high spatial resolution remote sensing to identify source regions and create a better dust emission map. I would also like to study new drying lakes and how dust from them can also play a role in the monsoons.”