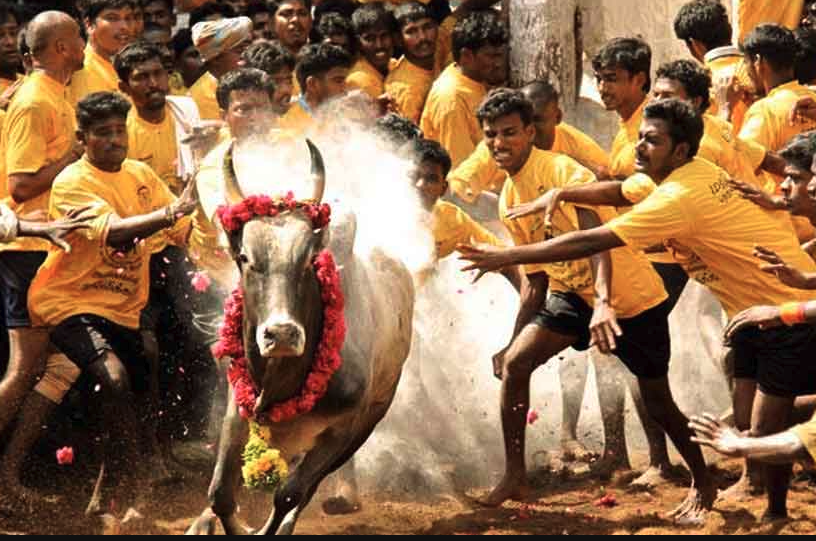 Ahead of Tamil Nadu Assembly polls, Jallikattu has become the subject of politics between Congress and BJP. A look at what it means for Tamil culture, and the controversies leading to an ongoing legal battle.

With Assembly polls round the corner in Tamil Nadu, the Pongal festival and Jallikattu, the traditional bull-taming sport, have caught the attention of the BJP and Congress. While the BJP organised Pongal celebrations led by national and state leaders in several districts, Congress leader Rahul Gandhi was in Madurai on Thursday to witness a Jallikattu event.

In the past, both the BJP and the Congress have faced public anger for their stands or Jallikattu, a controversial sport which has faced long legal battles over cruelty to animals, and which at the same time is a symbol of Tamil culture. In their present efforts to celebrate these cultural symbols ahead of elections, the two national parties have attacked each other over their past stands.

The bull-taming sport is popular in Madurai, Tiruchirappalli, Theni, Pudukkottai and Dindigul districts — known as the Jallikattu belt. Jallikattu is celebrated in the second week of January, during the Tamil harvest festival, Pongal.

A tradition over 2,000 years old, Jallikattu is a competitive sport as well as an event to honour bull owners who rear them for mating. It is a violent sport in which contestants try to tame a bull for a prize; if they fail, the bull owner wins the prize.

In an age when the farm sector is largely mechanised, there are no major monetary benefits for bull owners in breeding Jallikattu bulls other than the prizes they get during the Jallikattu events. Traditionally, these used to be a dhoti, a towel, betel leaves, bananas and a cash prize of Rs 101. Over the last two decades, the prizes have included grinders, a fridge and small furniture.

Why is Jallikattu important in Tamil culture?

Jallikattu is considered a traditional way for the peasant community to preserve their pure-breed native bulls. At a time when cattle breeding is often an artificial process, conservationists and peasants argue that Jallikattu is a way to protect these male animals which are otherwise used only for meat if not for ploughing.

Kangayam, Pulikulam, Umbalachery, Barugur and Malai Maadu are among the popular native cattle breeds used for Jallikattu. The owners of these premium breeds command respect locally.

Why has Jallikattu been the subject of legal battles?

In India, legal battles surrounding animal rights issues emerged in the early 1990s. A notification from the Environment Ministry in 1991 banned the training and exhibition of bears, monkeys, tigers, panthers and dogs, which was challenged by the Indian Circus Organisation in the Delhi High Court. In 1998, dogs were excluded from the notification.

Jallikattu first came under legal scrutiny in 2007 when the Animal Welfare Board of India and the animal rights group PETA moved petitions in the Supreme Court against Jallikattu as well as bullock cart races.

The Tamil Nadu government, however, worked its way out of the ban by passing a law in 2009, which was signed by the Governor.

In 2011, the UPA regime at the Centre added bulls to the list of animals whose training and exhibition is prohibited. In May 2014, days before the BJP was elected to power, the Supreme Court banned the bull-taming sport, ruling on a petition that cited the 2011 notification.

So, is it legal or banned now?

That is the subject of a case pending in the Supreme Court. The state government has legalised these events, which has been challenged in the court.

In January 2017, months after the death of Chief Minister J Jayalalithaa, massive protests erupted across Tamil Nadu against the ban, with Chennai city witnessing a 15-day-long Jallikattu uprising.

The same year, the Tamil Nadu government released an ordinance amending the central Act and allowing Jallikattu in the state; this was later ratified by the President.

PETA challenged the state move, arguing it was unconstitutional.

In 2018, the Supreme Court referred the Jallikattu case to a Constitution Bench, where it is pending now. The main question to be resolved is whether the Jallikattu tradition can be protected as a cultural right of the people of Tamil Nadu which is a fundamental right. Article 29 (1) mandates that “any section of the citizens residing in the territory of India or any part thereof having a distinct language, script or culture of its own shall have the right to conserve the same”.

Like Tamil Nadu, Karnataka too passed a law to save a similar sport, called Kambala. A similar attempt by Maharashtra, too, was challenged in court, before it was passed as a law.

Except in Tamil Nadu and Karnataka, where bull-taming and racing continue to be organised, these sports remain banned in all other states including Andhra Pradesh, Punjab and Maharashtra due to the 2014 ban order from the Supreme Court.

What is the politics playing out?

After the DMK regime in 2009 had issued a notification in favour of Jallikattu, it was the 2011 amendment by the Union Environment Ministry that led to the ban on Jallikattu in 2014. While the UPA regime was blamed for the ban, the BJP at the Centre too had shown an indifferent approach to the controversy until the 2017 uprising in Chennai, attended by thousands of people whose slogans often targeted the Narendra Modi regime.

Now, the two parties are competing with each other to assert their support to the Jallikattu event. Rahul Gandhi said at Madurai on Thursday that he had witnessed Jallikattu and that it was safer for both bulls and bull tamers. He also charged BJP with making efforts to suppress Tamil culture and language. For the BJP, national general secretary in charge of Tamil Nadu in-charge C T Ravi has accused Rahul of hypocrisy, reminding him of the UPA government’s stand that Jallikattu is “cruel and barabaric”.

The BJP is in alliance with the ruling AIADMK in Tamil Nadu, while the Congress is an ally of the main opposition DMK.