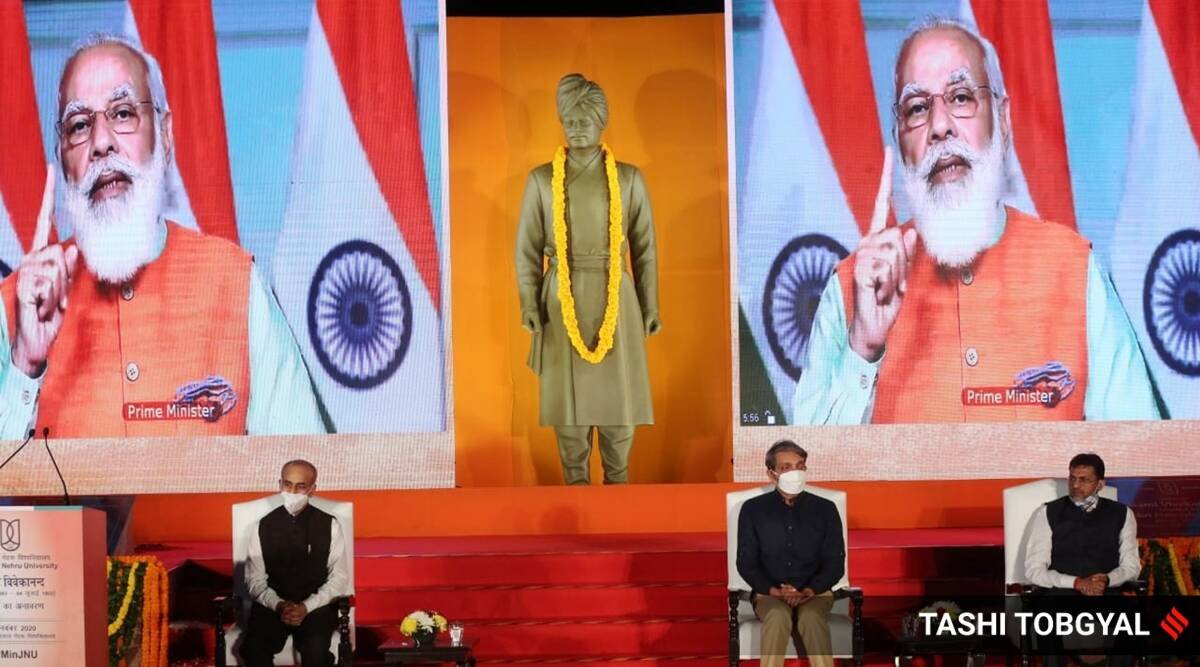 He stands tall in the scholastic milieu of JNU and gives the message to the world that India is above any ideology.

Recently, the unveiling of a statue of Swami Vivekananda has become a matter of debate at Jawaharlal Nehru University. On this auspicious occasion, Prime Minister Narendra Modi reminded us of the significance of institutions vis-à-vis ideologies. In fact, messages are more important than the attire. The ideals emanating from the teaching of Vivekananda are more important than the physical characteristics of the statue. The statue provides an opportunity to look back and to follow his ideals to build an inclusive value system in a crisis-ridden world.

The statue may look like an “occupation” to many critics, but to those who dreamt of having the structure in JNU, it embodies the values and principles that he symbolises. In JNU’s context, education is the first and foremost purpose. The statue inspires nation-building, contributing to the growth and development of people. It is not simply an abstract piece devoid of any real connection with the nation and citizenry. As PM Modi rightly said, sants (saints) belong to the whole world. They cannot be the property of any specific group territory. Swamiji’s statue has to be seen beyond the shades of political ideology and more in terms of the national interest. He stands tall in the scholastic milieu of JNU and gives the message to the world that India is above and beyond any ideology — but we cannot forget our civilisational value system.

Statue building in India goes back to the Harappan civilisation, on to the famous Gandhara and Mathura schools that produced first images of Buddha. India has a long association with the art of sculpting. Sculpting has a lot to do with the expression of human creativity, and going by our historical precedent, it has to do with the reverence of the saintly person or object of worship. Gandhara Buddha, Mahavira, Neminath and numerous sculptures of Hindu gods and goddesses are the examples worth mentioning. This is our civilisational approach towards the statues.

This is in direct contrast to the European approach where statues are focused on kings and queens. Their approach is to dominate the landscape and the psyche of the viewer, to leave an impression of inferiority in the minds of the subjects whose land is being “occupied”. Therefore, it was no surprise that the main tool of occupation and subtle intimidation was the erection of statues of powerful monarchs during the colonisation.

On the other hand, the purpose of the statue in the public space can be understood as an act of assertion in decolonised countries. They felt the need to put them in public. Their physical presence stems from aspirations and ideals. For example, Mahatma Gandhi’s statue outside the Parliament complex not only makes us aware of his contribution to the making of modern India but also reminds his words that the public officials should hold on to the power lightly and not tightly. The marvellous statues of Yaksha and Yakshini erected outside the Reserve Bank of India headquarters in Delhi are masterpieces created by Ram Kinkar Baij, embodying the aspiration of Independent India with regard to her economic development and growth. Had these statues been in the spirit of “occupation”, they would have been a gross misuse of the power by the government of Independent India.

Moreover, even if, one look beyond India, the iconic universities of the World have several statues of inspirational people. From Harvard to Columbia to Trinity College, beautiful statues of impressive people leave an indelible mark on our minds. In consonance, it is important to recall the PM Modi when he said that the purpose of the statue is to develop the vision of divinity. Swami Vivekananda’s statue, by all means, invokes such reverence and divinity. People who support the idea of this statue have their firm opinion that Swamiji is a great human soul who walked among lesser mortals and gave the message of ‘Bahujan Hitaye Bahujan Sukhaye’. Therefore, Swamiji is above any political ideology.

The writer is assistant professor at Dayal Singh College