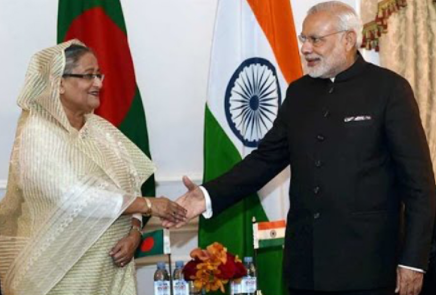 Bangladesh is evolving into India’s best friend in the neighbourhood

As PM Modi packs his bags for a historic trip to Dhaka this month, he can look back with satisfaction at India’s signature bilateral relationship with Bangladesh, that some think constitutes the edifice of his neighbourhood outreach.

Bangladesh PM Hasina has delivered on all of India’s concerns, ranging from security to connectivity, while India has done its best to reciprocate. From prioritizing Covid vaccine deliveries to Bangladesh to resolving the problem of enclaves through a comprehensive land boundary agreement, Delhi under PMs Manmohan and Modi has stood by its trusted ally.

Hasina warmed Indian hearts when her government not only invited Modi to be the honored guest on its 50th Independence Day (March 26, when Pakistan’s brutal army began Operation Searchlight, a catch-and-kill sweep through erstwhile East Pakistan 50 years ago) but formally requested the UN to recognize the 1971 genocide and Pakistan to apologies for it.

For Indian diplomats, who want the Pakistan army’s India-hate hysteria tamed to deliver a meaningful peace process with Islamabad, focus on the 1971 genocide is timely. It also helps India domestically in conflict zones like Kashmir, where Islamist separatists raise pro-Pakistan slogans and demand merger.

The 1971 genocide, graphically displayed in Dhaka’s Liberation War Museum, raises the question that Kashmiri leaders have to ponder over and answer – if Bengali Muslims, who constituted nearly 60% of undivided Pakistan’s population, didn’t get justice and rights, what could the Muslims in Srinagar valley expect if they were to join Pakistan, where they would be a miniscule percentage of the country’s population.

This is not to argue the Kashmiris have got what they aspire for in India. But Kashmiri men are playing soccer for India and girls from the Srinagar valley are flying planes – and avenues for democratic protests continue to exist in the Indian system. ‘Bangabandhu’ Sheikh Mujibur Rahman’s “Ostomate Atmojiboni” (Unfinished Memoirs) would be useful reading for all Kashmiris once it’s available in languages they understand.

The post-2009 crackdown on Northeast Indian separatists by the Hasina government has been the single most important factor leading to a huge drop in insurgency there – an 80% drop in rebel violence, according to the latest report of the Indian home ministry. Multi-modal transit between the Indian mainland and the country’s Northeast is increasingly becoming a reality, with new agreements and development of ‘connectivity infrastructure’ like the Feni river bridge opened virtually this month by Modi and Hasina.

Indian businessmen invested in Bangladesh’s garment industry are looking to expand their manufacturing to tiny Tripura, opening fresh vistas for industrialization in the Northeast. Agartala, emerging as India’s third internet gateway due to the connect with Bangladesh’s internet backbone, now offers huge opportunity for growth of IT industry in the Northeast, where English and science education promises a locally available workforce that now drifts to Bengaluru or Hyderabad.

The Modi visit on March 26 will revive memories of Indian support to the Bangladesh independence war, while sheltering 10 million refugees with an economy very low on food security. It also helps register the fact of bipartisanship in India-Bangladesh relations from the Indian side – if not the other way round.

With elections due in West Bengal and BJP making a determined bid to gain power, Modi is expected to deal with expectations of a payback. Signing the Teesta water sharing treaty, working out similar agreements for other common rivers, definite measures to address the trade imbalance and an end to border firings – India’s many friends in Bangladesh would look to Modi for definite assurance and action on these issues.

Much behind-the-scenes work is already on over how to address some of these issues, but more effort may be needed. India has a dynamic high commissioner in Dhaka after a while and a foreign secretary who has been our envoy there. Bangladesh has a top diplomat in Delhi who knows India from his previous postings to the country, and a foreign policy establishment which values India for support on issues as far-ranging as vaccines for anti-Covid immunization to tackling the Rohingya issue.

Despite the occasional hiccups caused by the social media savvy lunatic fringe of religious fundamentalists on both sides, the India-Bangladesh marriage is set to get more intense and rewarding.