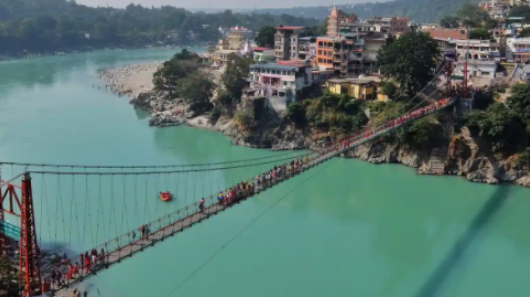 They are under stress. It’s time to devise a new development pathway and decentralize water governance in the region

This February was unusually warm. Delhi experienced average temperatures of 4.3 degree Celsius above normal, recording the warmest February (barring 2006). Less noticed was that many Himalayan states witnessed below-average rainfall. From January to mid-February, Himachal Pradesh, Jammu and Kashmir and Uttarakhand had 56%, 24% and 33% less precipitation, respectively. I spent much of February in Uttarakhand. Every local villager or forest guard I spoke to mentioned low rains and their concerns about water availability through the spring and summer.

The Himalayas-Hindu Kush region (known as the Third Pole because of the amount of water stored as ice) is home to 10 major river systems. More than half of India’s water resources are supplied by the tributaries of these river systems. The melting glaciers supply year-round water and the average economic productivity of the Himalayan rivers is nearly twice that of peninsular river systems. Beyond the large rivers are three million springs, which feed 64% of the irrigated land in the Indian Himalayan Region (IHR). These springs are the lifeline of mountain communities (50 million people across 12 Himalayan states), even as the larger rivers support the livelihoods of more than 500 million in the Indo-Gangetic plains. But they are facing multiple stresses.

Read More: Made for each other

First, reduced water flow. The Himalayan glaciers have been receding at alarming rates. In 2001, NASA images showed that Gangotri had shrunk by 850 meters since 1975. Later, an Isro analysis of 2,190 Himalayan glaciers found that three-quarters of them were rapidly retreating, by 3.75 km on average in 15 years. Low rainfall and absent snowfall impact the springs, rivulets and rivers that moderate the hydrogeology of the region. In 2018, NITI Aayog reported that nearly half the springs in IHR were drying up. In Alomar, 83% of springs had dried up over 150 years. Even in more pristine Sikkim, the water supply from half the springs had reduced.

Second, pollution. It is well-known that we treat our major rivers as drains. More than six billion liters of sewage is dumped into the Ganga daily, but the capacity to treat it is just a fifth of that quantity. The Yamuna’s course through Delhi is just 2% of its length but it receives 70% of the river’s pollution. Less known is that water pollution is affecting the upper reaches of the Himalayan rivers. A 2016 study found the water quality index to be unsuitable for drinking purposes for rivers supplying half the water in Uttarakhand.

Third, construction and deforestation. The construction of large dams, canal diversions and hydropower projects has direct and indirect impacts. Obstruction of the river flow, even for run-of-the-river projects, increases siltation, reduces the efficacy of hydropower projects over time, while reducing farm productivity downstream. When hydropower projects divert rivers into underground tunnels, such as for the tributaries of Indus or Alaknanda or Mandarina, the surface water flow recedes. For non-glacial rivers (such as Gomti, Planar, Kowsi), deforestation is the main threat, thanks to ill-planned construction. In Uttarakhand, 45,000 hectares of forest land have been diverted to other uses since 1980. As a result, water infiltration into the ground reduces. So, even when erratic rains arrive, mountain springs do not get recharged nor do non-glacial rivers get their water supply.

Fourth, the climate crisis. The World Meteorological Organization estimates that the decadal rise in temperatures in the Himalayan region is 0.4°C higher than the global average. The Fifth Assessment Report of the Intergovernmental Panel on Climate Change had stark warnings: Himalayan glaciers would retreat 45% by 2100 if surface temperatures rose by 1.8°C. Basically, even if the goals of the Paris Agreement were met, IHR is likely to face severe impacts. If temperatures, instead, rose to 3.7°C (closer to the trajectory that the world is currently on), glaciers would be 68% smaller by 2100, fragmenting rivers, impacting flows and affecting seasonal water availability. Pollution concentrations would also increase during droughts; warmer water temperatures and reduced dissolved oxygen reduce the self-purifying capacity of Himalayan rivers.

There are no silver bullet solutions, but two approaches should be at the core of the response. First, IHR needs alternative development pathways, the absence of which makes the construction industry the default option. More sustainable models — high-valued-added agriculture, less water-intensive natural farming, food processing, ecotourism, investments in non-hydropower forms of renewable energy, or monetizing the preservation of natural capital — cannot be restricted to pockets or pilots. Alternatives must be designed and deployed at scale to get buy-in from communities and policymakers. Secondly, decentralised water governance, especially of springs, is imperative. Then communities can understand the conditions of their spring waters, determine appropriate use, and protect or increase forest cover, because their livelihoods depend on replenished water resources.

Our mythology is replete with stories about the origins of the Himalayan rivers and their holiness. But it is a myth that our rivers can continue to be self-cleaning, self-healing and self-flowing beyond a point. The Himalayan water systems are under increasing stress and they need our attention — and course correction.